I know that HOB has their supplemental armor rules (sand bag, concrete and steel applique variants), but has anyone ever encountered rules or SSRs for the field expedient overhead armor modifications for US TD? According to New Vanguard's "M10 and M36 Tank Destroyers 1942 - 53":

In both Italy and France, overhead protection was added to us TDs on an ad-hoc basis. The 813th TD Battalion from 9/44 developed both partial and full 5/8" steel folding covers for the turrets of their TDs. During the Ardennes and Alsace fighting the 5th TD Group began a program to provide such covers for all their vehicles.

It would seem to be a very nice capability for the US OT TDs to be able to BU.

I'm not certain it would be enough to count as closed top but you coukd certainky SSR that the minus for OT versus mortar or OBA did not apply.

IIRC from looking at this years ago.
Sometimes wood was used. The overhead almost seemed to be more of a protection against weather kind of thing when not in combat.
Also, I believe they needed to be "CE in ASL terms" to operate the gun, but I cant remember for sure.

It certainly looks like the gun could be fired, but I'm not an expert.

Why would a M10 with a tin hat be any different to a Pz IV? The only difference between a CE CT and a BU CT AFV is target detection, acquisition and fine aiming should be a bit slower/harder. It's not like the loader has to jump out of the turret to fetch a round from a trailer or box strapped to the engine deck.

I believe this is a area for designers to do a bit more research into when designing scenarios. We had a local WW-II TD unit that had been in the Pacific, and back in the 90's when quite of them were still around, I had asked them if they ever covered their turret. Without fail they had their maintenance section jury rig some overhead protection after the first few engagements (normally just some welded boiler plate materials or the such IIRC), mostly to protect from "tree bursts" and the such. Now were they fairly accurate and used extensively during engagements, I honestly can't remember if I asked or what their response was if any. Like the photo above, I had envisioned such a G.I. rigged system in my minds eye however.

Per a comment here, " The lack of overhead armor was quickly recognized and it is difficult to find a picture of an M10 taken in 1945 that does not have a field expedient armored roof and late model M36s were delivered with armored roofs." Sounds plausible.

Some images of the M36 with what I assume is the official overhead cover fitted: 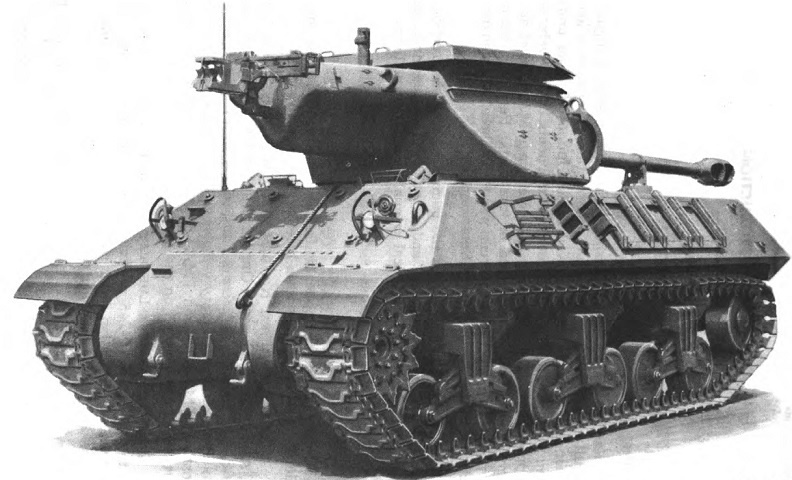 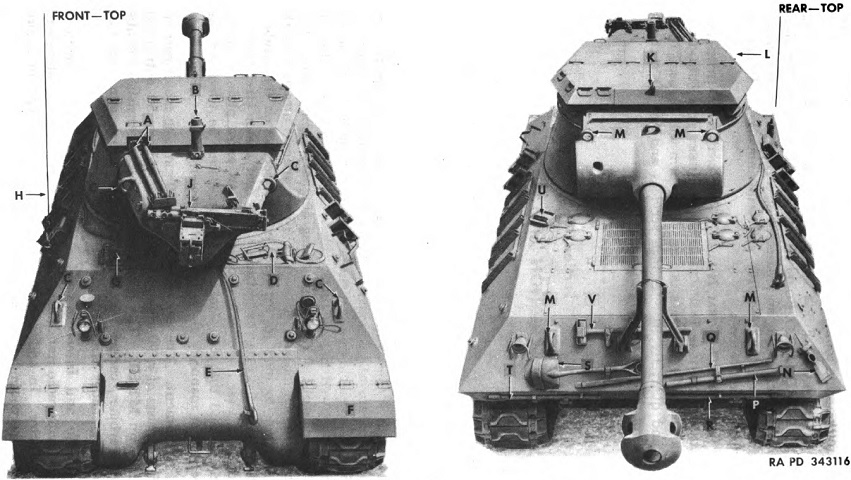 There were actual "official" overhead kits designed and produced for the M10, and M36 (there may have been for the M18 but I'm not sure). They may have arrived in the ETO right near the end of the war. One thing to keep in mind, the the TD's role by late 1945 was really not to destroy German tanks, as those were few and far between, but performing indirect fire, and assault gun roles. They actually performed well in supporting infantry in the urban environment as was demonstrated by the two TD battalions that supported the 1st ID in Aachen. And those did not have overhead cover installed. They were placed in overwatch on long city streets as infantry advanced forward. By having three crewmen up and looking with binos they were able to quickly support infantry advancing ahead with direct fires.

As to game terms, I would recommend only allowing US TDs to have such cover by SSR and scenario designers should be sure there was proof that they had such in the specific situation. And yes, if the TDs have the cover then they should not be treated as open topped vehicles.

It's possible that the South Korean M36s in FW should have production armored covers.

The "Army" is a one & done organization for the most part, especially when it comes to field modifications in combat; cross-service application would almost be non-existance I believe. I would deem it highly unlikely that at least "early-war/early-employment of these assets would have had field modifications as it simply wasn't the way it was supposed to be (Doctrine you know). As an example on my 1st tour of Iraq we had G.I.'ed re-engineered our vehicles to protect the top (turret) gunners with some "hadji armor"; by the 2nd tour the "Army" had arrived (with all of it doctrine & regulations) and we were held to standard of open (non-armor protected) turret gunners. It wasn't until later, after combat AARs had gone up & down the pike, that gun-shields were approved and modifications came down as approved though out the system (in fact a mandated official mod). Later of course this practice became the standard.

Korean M36s had a BMG installed, though I have no idea whether that was done post KW or during the KW.

In a similar way, I remember that the SL system (Cross of Iron) had OT and CT versions of the Soviet SU-76.
ASL abandoned the CT version altogether.
Was it too rare to be included in the Russian countermix?

The original SU-76 indeed was CT. That version had 2 engines, one each side of the driver, that independently drove each engine. In practice the driver had nightmares matching the engine speeds and the bugger was inclined to snake instead of driving straight. The T-70, which when extended by an extra wheel became the SU-76 chassis, had the same problem.

Both were redesigned to have the 2 engines on the driver's right, linked in tandem through a common transmission. Both also had a small increase in lower hull side armour. The new versions were designated the SU-76M and T-70M and are what comes in ASL. The SU-76M had it's fighting compartment widened a bit and lost its roof and some of the upper rear armour. Late production SU-76M had the rear armour raised in height.

I get the impression that the CoI SU-76 and SU-76M were not very well thought out, relying on vague descriptions and hints. Remember that SL/CoI was produced at a time when accurate information about Soviet armour was spotty at best and often suspect. From the 90s onward much more accurate data, not just about armour or other technical stuff, but also production variants came out. I personally have tended to treat many of my 70s-80s era Soviet Armour books with caution despite them being the best and most reputable of that time. The SU-76 is probably the worst of the interpretations in CoI.

I've never found documentation with solid information as to the fate of the T-70 or SU-76 before being replaced by the T-70M and SU-76M. They did see service, but I suspect for no more than a few months. They apparently were that bad.

I'm just thinking that if we can have prototype Finnish armored vehicles it would be nice to have an "official" option for added protection for US TDs that DEFINITELY saw more than a single use in combat. And at NO point in the war were US troops ever the morale EQUALS of the rest of the counter mixes' "8"s?

Gordon said:
I'm just thinking that if we can have prototype Finnish armored vehicles it would be nice to have an "official" option for added protection for US TDs that DEFINITELY saw more than a single use in combat.
Click to expand...

I am sure if someone designs a scenario(s) with it and submits it to MMP we'll at least see an "official" SSR - assuming the scenario gets published.

Swiftandsure said:
In a similar way, I remember that the SL system (Cross of Iron) had OT and CT versions of the Soviet SU-76.
ASL abandoned the CT version altogether.
Was it too rare to be included in the Russian countermix?
Click to expand...

The closed top version of the SU-76 was less then 250 produced, it had some major problems that the 76m version fixed. Since the later model was no longer expected to battle tanks in the front line due to it's gun, and was to be used as an infantry support weapon at longer range, the armored roof was dropped too.

Paul M. Weir said:
Why would a M10 with a tin hat be any different to a Pz IV?
Click to expand...

PzKpfw IV has a commander's hatch with markings on the inside to aid in laying the gun on target. The M10's "tin hat" would not have that. The commander's cupola also had vision blocks designed to be used when the tank was BU IIRC.

OK. A Valentine or early M4 Sherman only had Mk 4 periscopes, no cupolas. The M10 tin hats that I have seen in photos still have a small gap between it and the turret top. So visibility should be actually better from a tin hatted M10 than a Valentine. Protection from splinters would not be quite as good as the Valentine but still far, far better than a bare headed M10.

Paul M. Weir said:
Why would a M10 with a tin hat be any different to a Pz IV?
Click to expand...