How can a broken unit become involved in CC.

My understanding is, that a broken unit must rout away from an adjacent enemy unit, in the rout phase, hence cannot be adjacent during the APh. A unit cannot become broken during CC/Melee.

If a broken unit can become involved in CC, what is the FP of a broken unit in CC - is it zero? Does the -2 DRM apply to any combination of defending units that includes at least one broken unit? Can a broken unit be attacked alone? If so and the FP is zero is the kill number 13?

First of all:
I play full ASL and am not really familiar with the differences of SK. So maybe some of the things mentioned below may only apply to ASL. Nevertheless, I reckon you'll get the idea.

How can a broken unit become involved in CC?

Once a Melee exists, one side might decide to fire into the Melee (hitting both enemy AND friendly units). As the result of such an attack, units of one/both sides might get Pinned, Broken, Reduced, Killed.

Usually, when designating attacks during the CCPh, you will specify which units you wish to attack. This can be all, some or none.

The DRMs to the attacks apply according to the units in question: If you attack a stack of one broken and one unbroken unit, the broken one will be attacked with a -2 DRM, the other without that DRM, and the results are applied accordingly.

To determine the odds of the attack, you still look at the CCV (Close Combat Value) of the units involved, Squad 5, Crew 4, HS 3, etc. So a broken squad would defend with a CCV of 5 before the application of any DRM modifiers. In ASL, that would be -2 vs. Broken Unit and another -2 vs. Withdrawing Infantry (as Broken Units have to attempt to Withdraw), which would be -4, which means that brokies are mostly toast in CC/Melee.

In SK CCV is only used by Infantry attacking a vehicle in CC. Prior to this the ratio for infantry combat is introduced as

"The FP of attacking units is compared to the FP of those enemy units being attacked in order to achieve a ratio of attack to defense FP strength called odds."

So this procedure seems different.

Edit: found a similar question on BGG, where the answer regarding FP was given that broken units defend with the GO side FP. 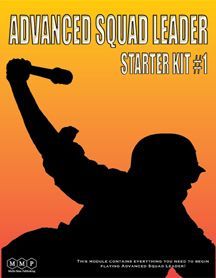 Although similar to ASL in most respects, SK uses a much simpler CC mechanic.

Regarding your question, the broken unit would have routed away from the adjacent unit during the RPh, and hence would not have been there for the advance/CC. (EDIT: I neglected to add the SK4 concealment possibility as pointed out by Klas below).

In SK, the only possible CC results, for infantry v. Infantry, are NE, CR, or KIA (and the rare leader creation result). However, it is possible that while both sides are in melee, a heartless player may fire upon the units (including his own) in the melee hex. The IFT results would be applied to all units whether friend or foe. It is therefore possible (I know from bitter experience), that one or more of the melee units can be broken while still in melee.

In SK, there is no withdraw option for infantry out of melee (AFVs cannot be held in melee). Thus, assuming the other player still has GO units in the hex, the broken units will have to undergo a CC attack. Bottom of second paragraph 3.3 makes clear that in CC, the broken units cannot attack, however they can defend, but giving a -2 DRM to CC attacks against them.

In Starter Kit #4, Concealment is introduced, and then it is possible to advance into a broken unit's hex during the APh. Since a concealed unit moving adjacent to a non-DM broken unit won't cause DM, the broken unit can't rout away.

Klas is correct, as usual!

As long as the concealed unit complies with the list of exceptions described under 8.3, it can maintain its concealment and thus not force the non-DM brokie to gain DM and therefore have to rout.

The SK CC description, that "only unbroken units may attack, but even broken units defend, although they suffer a -2 DRM to CC attacks against them" really needs the missing text from the full rule book that they "defend with their full (unbroken side) FP".

Thanks for anyone who clarified this small rule gap in the SK rule book.
Last edited: Jun 16, 2022

Millenium_baby said:
The SK CC description, that "only unbroken units may attack, but even broken units defend, although they suffer a -2 DRM to CC attacks against them" really needs the missing text from the full rule book that they "defend with their full (unbroken side) FP".

Thanks for anyone who clarified this small rule gap in the SK rule book.
Click to expand...

Why would it need the missing text? What else would you defend with?
It lists a DRM against broken units.
It's straightforward. No attack allowed, but says nothing about defending...it simply lists the difference of CC activity.
But then again, SK seems to be on the short end of the stick in some critical areas in clarification that are present in the ASLRB

Stewart said:
Why would it need the missing text? What else would you defend with?
Click to expand...

Zero FP could be one option? If no FP value is given on a side why would I assume a unit on that side had any FP value to add to CC?

Millenium_baby said:
Zero FP could be one option? If no FP value is given on a side why would I assume a unit on that side had any FP value to add to CC?
Click to expand...

Not an option.
Broken units defend in CC as any unit, i.e. with their FP, but suffer a -2 DRM.

I know for you guys who played this for ages this might be no longer visible. It is easily imaginable that broken units defend in CC with a FP of zero if none is given on the side of the counter. After all, there are different morale values on the counter sides so why would a non-printed value indicate the value from the other side rather than no (i.e. zero) FP.

Anyway, it is clear to me know after reading the additional text in the ASL RB.

Moreover, if it is such a none brainer, why does ASL need specific text for this situation? Reminder, the full rule-book seems to think there is a need to state that a broken unit does "defend with their full (unbroken side) FP". If there is no other option thinkable this is redundant text. From my impression, there is not much redundant text in ASL (though I might be wrong there )

I would think that, if no change exists, the rule doesn't need to add an element.
The ASL rules are very concise, as you noted.
What is also important, is not to imagine things.
But we all are stuck at some occasions so this forum and other online resources help.
You must log in or register to reply here.
Share:
Facebook Twitter Reddit Pinterest Tumblr WhatsApp Email Link
Top