I did not say it was impossible, I said what you are showing in those screen caps and in that video are nothing like what SES needs to do with gun smoke in their naval sims.
R

saddletank said:
I did not say it was impossible, I said what you are showing in those screen caps and in that video are nothing like what SES needs to do with gun smoke in their naval sims.
Click to expand...

Are you programmer?
WTF are you talking about? I never mention anything about gun smoke in Jutland must look exactly like clouds on pictures.

I talk about technology which can help SES create large smoke fields without too much load on CPU/GPU.

Exactly: Do not use tens of thousands of simple smoke sprites like in Jutland, use fewer and bigger volumetric shapes. It looks alot better and consume alot less GPU fillrate and CPU power.

There are even alot of SDK ready to do the job.

Old 2008 example with details how to do it:
http://graphicsrunner.blogspot.com/2008/03/volumetric-clouds.html

OK - I know I started the smoke thing, but ... well... on to other items on my wishlist:
Campaign Related:
-Ability to set patrols at multiple points on a route.
-Ability to repeat or otherwise automate patrol patterns. I've found in RJW that it would be nice to have a group of picketting cruisers come lie in close during the day and pull of at night to be replaced by torpedo boat squadrons. The IJN set something like this up off of Port Arthur and you can do it in DG1.5. But it'd be nice to not have to redefine the patrol every twelve hours. Jutland (with it's larger fleets) would also benefit from this ability. I've tried setting multiple patrol points in a route in both and have been unable to do so.
-An expansion of the above: "patrol orders" and "fleet standing orders". This would be a real aid to people like me (now - thanks Anav!) who try to minimize orders passed to units to something more consistent with the level of control possessed by the historical commanders. An example might be a way to tell your task force to "Patrol this grid square during daylight and this grid square at night" or "be to this grid square by 0800 every morning until you need to return to port". An example fleet standing order might be the ability to (in the formation screen perhaps) tell each [ship? division?] a range to open fire and a preferred target. Togo and Jellicoe both had statements in their orders to the effect of "I intend to open fire at XXXX yards". Ok, Jellicoe's was XXXXX yards...but you get the idea....

Weather related:
-A nautical "almanac" on the campaign map - i.e. some way to know the predicted phase of the moon and hours of sunset and sunrise. This is something that the astronomy model appears to calculate now, is information that the historical commanders should have had to a relatively high degree of precision (e.g. the IJN used knowledge of the phase of the moon to plan torpedo attacks for low light IIRC), and should be easy to display to the user (weather tab maybe?)

Really too much to ask for:
-OK I know I'm asking alot...but how about a realism option to add a pseudo-random time delay on orders in campaign and tactical? E.g. I've got a task force sailing to point A and I decide that point B is better for some reason. The time it takes me (ADM Togo or Makarov or whomever) to say "Tell Task Force 2 to proceed to point B and await further orders" is only a tiny fraction of the time that it takes TF2 to get the word, decipher the word, and act on it. Ideally, in the RJW, this would include a radio model and a map of the (relatively far flung) telegraphy stations in and around the Sea of Japan in 1904/1905. You can see what claims to be a cool map of the IJN's telegraphy lines here below: 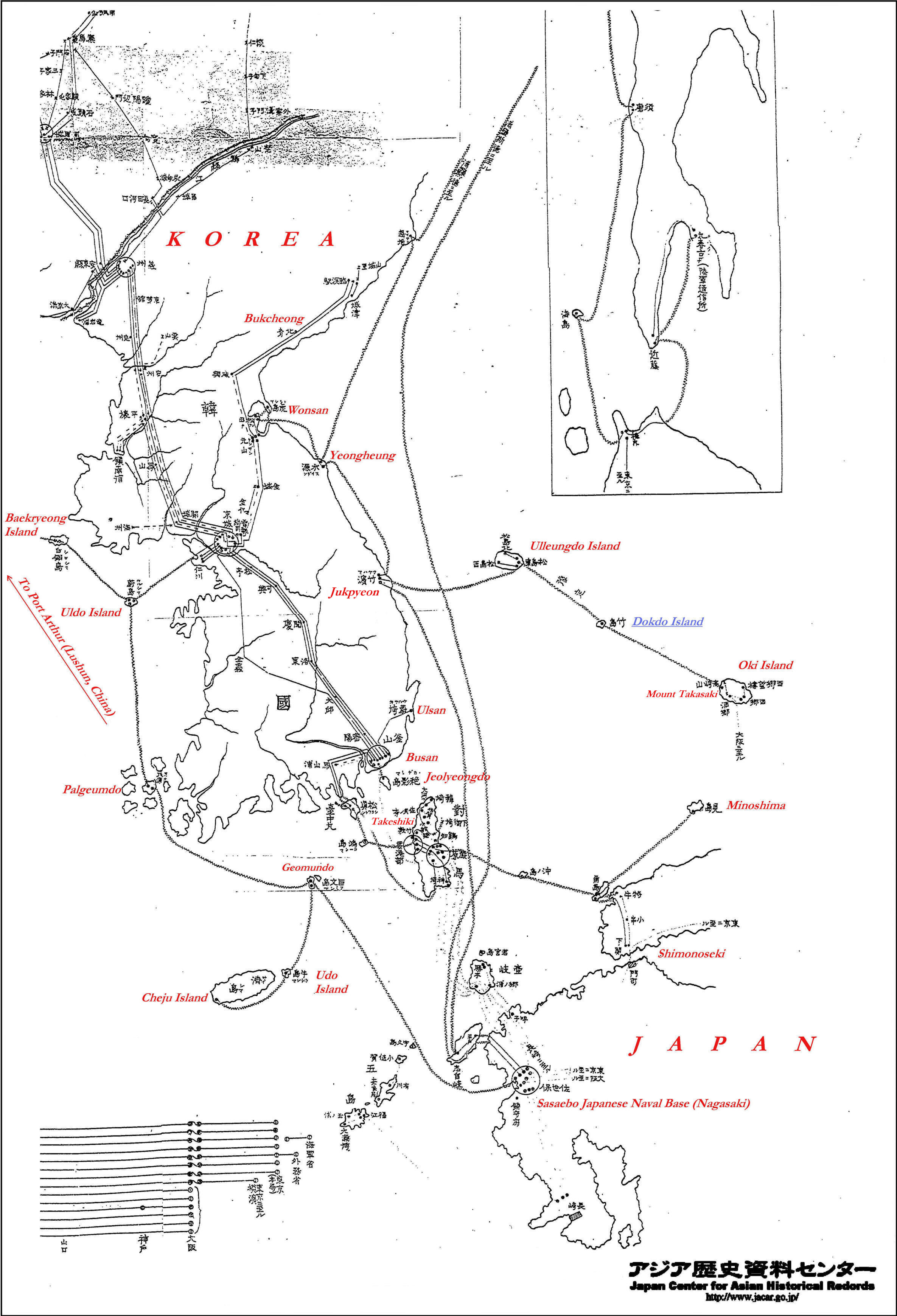 If the senior "character" in your Navy isn't in the task force, or if the task force isn't within wireless range of a telegraphy station that the senior character can "connect" to...well then TF 2 goes to point A like you told them to when they left port.
In tactical, both RJW and Jutland are almost there: if a unit cannot get the word due to visibility or loss of masts then the player can no longer control the unit. But what about increasing the time delay between mouse clicks and ships responding to command? This realism option would add in the time to hoist the flag signal or send a wireless message, receive and decode the message, and pass it to the commanding officer of the unit in question.
Whew. Ok. I'm asking for a lot again....but hopefully one or two of these ideas are actually doable and might find their way into an update.
v/r
feld
Last edited: Dec 19, 2010
You must log in or register to reply here.
Share:
Facebook Twitter Reddit Pinterest Tumblr WhatsApp Email Link
Top