ProSIM announces the publication of "Media War" as a Google eBook

Several folks expressed disappointment that my first book, Media War: The Media Enabled Insurgency in Iraq was only being offered as a Kindle book. Well, it is now available at Google Books as an eBook as well. Here is the press release: 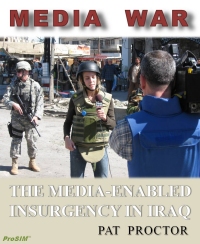 "In Operation Iraqi Freedom, insurgent and terrorist groups have demonstrated the capability to use small, relatively insignificant tactical attacks, amplified through the megaphone of the media, to dramatic effect on the will of the American public to prosecute the war. This capability has neutralized the overwhelming advantage the US military has in firepower in Iraq by bypassing it completely."​
ProSIM Company is now a Google Books partner! Their first entry at the Google ebookstore is my first full-length book, Media War: The Media-Enabled Insurgency in Iraq. This book is the culmination of over two and a half years of study of the US military, the insurgency, and the media in Iraq, including lessons learned from my first, six-month tour in Iraq working on the front lines of the media war.

To get Media War: The Media-Enabled Insurgency in Iraq at the Google ebookstore, click here.
Last edited: Jan 21, 2011