The Mundane Adventures of a Drunk Cmdr.

Quite to my surprise, my brain suddenly started processing visual stimuli again and I found myself staring through my cockpit screen at some bleak hunk of rock pockmarked by craters.

​
My brain tried to process the words my HUD were showing me. "No..no...bell...gate...waaay. " Ouch. My brain hurt. I needed another drink. Where the heck was "Nobel Gateway"? How did I get here?

I tentatively tried to move. That just brought more pain. Still, I persisted. I managed to untangle my limbs and peel my back from the form-fitting crash couch that I must have been dozing in for quite a few hours while my Cobra hurtled through the void.

Well. I was here now, so I might as well head planetside to see if I could find another bar. I felt good enough to make a landing attempt. Not an actual landing, mind you, but an attempt. Anything more would be gravy.

I am not the best pilot in the galaxy, but I do pride myself on my precise approaches and landings. This time, well, it was different. I wasn't flying the craft as much as getting into a wrestling contest with the flight stick. Wow, I needed to sober up.

I did make it to Nobel Gateway in one piece. Seemed to be a nice sized planetary port set just inside the rim of a low crater:

I was so distracted by the view that but for the voice of the traffic control girl, I would have flown right on past. When I snapped out of my mini-blackout, I realized that the base was right below me. So much for using a long, gentle glide path. Instead, I pointed the nose down at the base and hit the throttle. I pretty much came in like the proverbial rocket. The poor fellas in the ATC tower must have hit the deck seeing all that tonnage come hurtling down like a lawn dart back on green earth! I laughed to myself at the time.

At the final few meters, I flared my approach and hit my high beams, further adding to the ATC's discomfort. "Now he's blinding us!" Chumps.

I came in too fast, bouncing the craft twice on the pad. LOL! Good thing my shields absorbed the shock. My craft was now safely settled on the pad, if cockeyed. Who said you couldn't drink and fly?

I looked out through my windscreen and admired the nicely sized port. I could see some high rises framed by a beautiful sky filled with the ultimate light show. This is what made it all worthwhile. Well, this and the zero-G booze.

Once my ship was safely lowered into the bowls of the station, I spilled out of the cockpit and proceeded to stumble through the corridors, seeing if I could find some work. I passed a trash receptacle and grabbed a discarded news slate from the top of the pile. It was a few days old, but the lead story gave me hope for a good contract:

Apparently, I was in a system called Thoth. Shrug. With 400 billion systems in the Milky Way alone, one system was just like an infinite number of others. Sure, the dames might be prettier in one, the gambling better in the other, but they were all the same.

I found my way to the port contract brokerage, and perused the open offers. One caught my eye: a simple delivery mission. Perfect. I wasn't in any condition for anything more challenging. I keyed the contact button on the screen for "Thoth Free," the organization offering the job, and found myself starring at a freaky-looking dame by the name of Councilor Eden Stanton. Great, a lawyer. She was all business and got right to the point. Turns out the package was a delivery of personal weapons. Someone was throwing a party somewhere....

While the freaky lawyer eyed me suspiciously, I fumbled around in my flight jacket, looking for my smart slate. I finally found it one of my inside pockets, flipped it open, smiled at Stanton (she just sort of growled in response) and keyed in the coordinates of the destination:

She just said to get going; the cargo would begin loading into my ship immediately. The screen went black and then filled with the logo for "Thoth Free," one that suspiciously looked like a middle finger to me. But that was probably just my handover talking. So I fished around in my jacket again and came out with my prized flask, and downed some more rye.

This story was inspired by me almost falling asleep at the keyboard. I was tired, but wanted to get one more mission in. So, I plowed ahead and found one on the job board. I planned my route, set the jump point, and took off. When I got to the system in question I couldn't find the delivery destination on my navigation screen. Odd, I thought. That is when I looked at my contracts: none were listed. No! NO! NO!! In my stupor, I had forgotten to even accept the job before taking off! :facepalm:

So, too tired to go back, I decided to just land at the nearest base and call it a night. Like I wrote in the short story, I was so tired I couldn't even make it to the pad without first overshooting it, and later coming down too fast and bouncing on the flight deck! LOL! I couldn't believe how my reflexes were falling apart in real time.

Imagine if I was really driving somewhere. There is a scary lesson there about not driving while drowsy. FYI :captainobvious:

I stumbled my way back to my ship that was in its claustrophobic, subterranean cage.

That is one of the great ironies you discover about the spacer life. As a dirt pounder, you always imagine space as this vast, open panorama, and it is. But not the livable parts. For those of us who spend most of our time shipboard, going from one space station or surface port to another, you quickly discover that living space is at premium. Unless you are wealthy and can afford some premium digs, the type of penthouses and suites that only those at the top of the corporate food chain can afford, you better get used to feeling like you are living in a tight, artificially lit shipping container. This is an understandable concession considering the sheer cost and complexity of keeping the harsh cold, vacuum and radiation of space away from every living creature. Not a lot of room for error. Or comfort.

After a quick inspection of my Cobra, Rififi, to make sure all was well and the cargo hatch was properly secured, I used the rear access hatch to make my way to the cockpit. I set in the coordinates for...what was it again? Oh, yeah: "AO Guang." Never been there before. I notified ATC I was ready to depart - I swear I heard giggling in the background when they recognized my voice. Never gonna live that landing down. The yellow caution strobes lit up and soon my ship was hefted onto the surface. As usual, it was quite the evening to behold.

With an "all clear for departure," I hit the throttle and rocketed off the surface. Course laid in, I waited for the Frame Shift Drive to spool up.

Almost four light years to cover. About 15 seconds travel time. The surface of Thoth 2 fell behind me and the stars lit up....

With the customary welcome BANG!, I exited witchspace and beheld the glory of the primary sun for AO Guang, a K-class star. 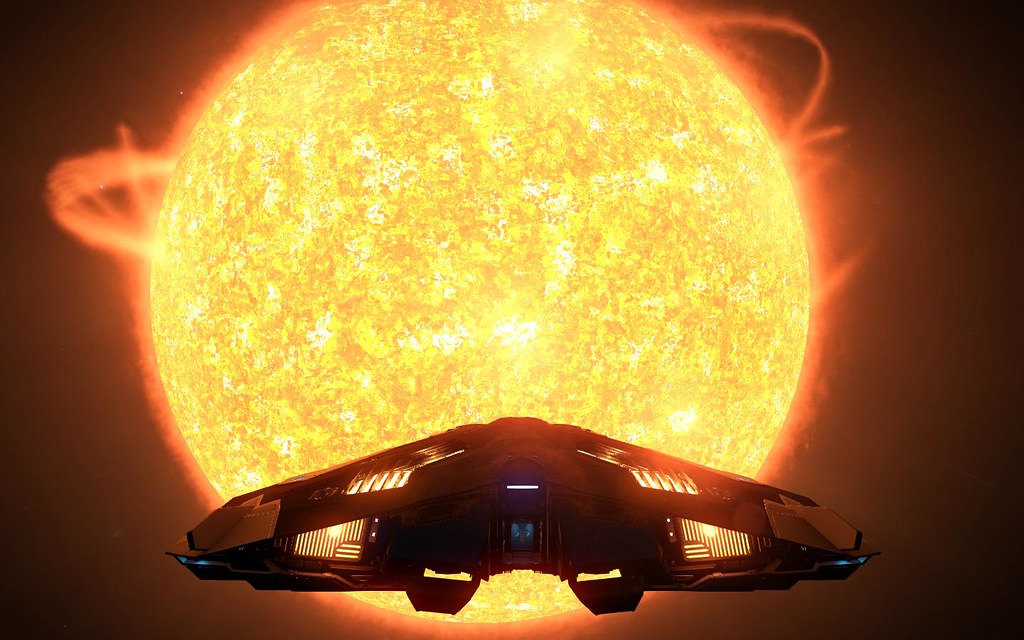 Not having been here before, I got my sensors analyzing it for some petty credits from the Stellar Cartography Bureau. As I was flipping some switches, my comms panel chimed to let me know I had an incoming message. I bet it was that freaky dame again. Yup. Stanton.

Hey, now! That is the kind of lip I like to get from a gal! A bonus payout of almost 63K credits for a rush delivery! Looks like someone was in a hurry to get the killing started. Fine by me.

I checked my navigation directory...bingo! There was H. G. Wells Plant.

Good, only 1,501 light seconds away. The 37 minute delivery window was no problem.

Looked like a fight was taking place nearby. No surprise, I guess.

I maxed the throttles. As I hurtled towards my destination, I took a look at the various factions in the system. There were eight or so, with AO Guang Jet Comms Co. being the most influential in the system.

Better stay on their good side.

Finally, H. G. Wells Plant came into view, with a low intensity conflict zone to its left, and a gas giant to its right.

My senors told me that it was unexplored, so I could nab some quick credits by scanning it as well. Definitely worth the few seconds delay it would cost me. I still had plenty of time to make the rush delivery window.

Data collected, I closed with Wells and exited supercruise. HG Wells Plant surprised me a little. It was one of those less common Coriolis stations with two massive booms extending from opposite poles. I hate those things. Makes landing as difficult as pinching a purse from a gal armed with a blackjack. If you are not careful, WHACK! on the head and into oblivion.

Somehow I pinched that purse, making it close enough to request docking permission. Given the all clear, I lined up my approach. Seeing Wells name all up in lights just annoyed me.

There was Pad 14, near the back, two kilometers or so inside the station.

Unlike Thoth 2, a perfect touchdown. Guess I was sobering up.

Now to turn in the mission.

Let's see, my contact here was "Compatriot" Ike Doyle, of the Unified AO Guang. I called him up:

Couldn't wait to tell me about the civil war. Why do I smell combat contracts? Anywho, I turned over my cargo and got a "good job" from Stanton: