The Ethics of Scenarios With SS

Gunner Scott said:
Is there a reason why you have to post pics and act like a 2 year old? Of course nothing new here, but people are actually having fun talking about this topic.

Mr Olden's only sin is being unsuccessful in hijacking a thread that desperately needs it. Alas there does seem to be a need for both sides to release some sort of ethical/moral pressure build up that has evidently reached intolerable levels.

I wonder if Pitman will make a rare cameo appearance....just for old time's sake...to try to recapture some of the old magic?

Of course, the "Cheese in a Can" sub thread is a creditable effort. As to American cuisine, three letters: BBQ, be it Texas, Carolina, or Kansas City. It gives modern man a path back to his carnivorous past that is socially acceptable....and it is so dang good.
B

Fort said:
A Scot derided ANY cuisine is freakin' hilarious.

American cuisine is some of the best in the world.
Click to expand...

Damn straight! We invented the fruit rollup! The only food you can unroll and put in a three ring binder as well as fax it to someone!

Vinnie said:
And great American cuisine is? Marshmallow fluff perhaps or maybe cheese in a can?

Can any of you come close to a deep fired mars bar?
Click to expand...

Can't believe we are talking American Cuisine and no one has brought up Americas most famous contribution: Cheeseburger and fries!

PS- BBQ ISN'T American, but we perfected it!

Blaze said:
I'm sorry *has a lost look* I'm looking for the NKVD thread titled "Are you an evil commie for playing NKVD scenarios using the Hammer and sickle logo" I think I made a wrong turn and ended up in SS land.....

You also missed your chance to vent your spleen in the 'Most despicable attack of WWII' thread in the Community Chit-Chat area. But, don't worry. One of the usual suspects will get bored and start another one in a few months. Expect one of these in the near future:


* Would you still love your momma if she was SS?

* Your ELR should become higher if you massacre enemy troops!

Now that I think of it....this warrants being in Chit-Chat.

My apologies for not doing so earlier.

And that neatly encapsulated my problem with the fire bombing campaign. Too many of the attacks were carried out by the RAF and although we did have Aussie crews, we really dint know how to host a BBQ.

Vinnie said:
And that neatly encapsulated my problem with the fire bombing campaign. Too many of the attacks were carried out by the RAF and although we did have Aussie crews, we really dint know how to host a BBQ.

One of the main ingredients to hosting a BBQ is to have "hot, SUNNY days".

Plenty here in Texas, so that's why we teach our kids early on.....

I would not grill it

MMP will placed SS counters in the next ASLSK item.

Now the new players can have their own thoughts about SS.

Kevin Kenneally said:
MMP will placed SS counters in the next ASLSK item.

Now the new players can have their own thoughts about SS.
Click to expand...

Of course, but neither were many of the US combat units...

Bugslayer said:
Delirium....dude just because I notice it is raining and bring it to your attention doesn't mean I like the rain! Not equating the various war crimes committed by the various nations that fought the war, just pointing out that no-one had clean hands in WW2. While the war crimes committed by the axis in WW2 or inexcusable and morally reprehensible, to continue to point them out without owning up to our own war crimes is as bad if not worse.
You find fire bombing Dresden morally problematic? I think it safe to say if you were there at the time you would have found it more than morally problematic, as did the women and children who were incinerated in that mess. Wrong is wrong, and winning doesn't erase that. Not only both sides were guilty of war crimes so were some of the neutrals who never fought in the war! The Swiss have paid for holding property stolen by the Nazis (IE Jewish wealth stashed there) Turkey played both sides, in Ireland many Irish embraced Nazi germany under the enemy of my enemy is my friend guise ( Stephan Hayes and Plan Kathleen)

I try very hard not to call out any other nations faults here due to the fact that there are various nations represented here, we all know our own history (or should), I am not a revisionist historian nor am I an apologist. The death camps and extermination squads were inexcusable. As were the Soviet gulugs and the Japanese prison camps, all of these were due to racial intolerence and revenge, a thing that will continue as long as we keep rehashing whose to blame and who did what. I had 2 friends who survived the American Japanese Interment camps, the stories they tell is one of starvation, beatings, lack of medical attention and death. The fact that this happened here in America strikes me deeply, I would hope the citizens of the various other countries represented here feel the same about the "morally problematic" parts of thier nations conduct.

But to transfer the morals of one political side or the other to a piece of cardboard is idiocy. Then I can't play the game at all because all sides violated the rules of War in WW2?....hurry up Soldiers of Negus, unless someone knows of some Ethiopian violations! totally absurd:laugh:
Click to expand...

Ito's unit, the 522nd Field Artillery, liberated concentration camp prisoners from a subcamp of Dachau, a town in southern Germany.
"It was an awful feeling, hearing a Lithuanian teenager, in his gray uniform, translate what had happened," he recalled. 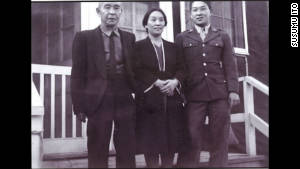 Ito visits his parents at the Rohwer internment camp.


As he snapped photos of the survivors, he thought of his parents and the stark difference in treatment between the German and American camps.
"I have objected to Americans calling the U.S. relocation centers 'concentration camps,' because in my mind, they were nothing compared to the emaciated bodies and crematoria we found in Germany," he said.

Wow, they were so lucky !

Jacometti said:
Wow, they were so lucky !
Click to expand...

Your point is what, exactly?

Do you think that I believe that internment of US citizens was just and moral?


No one claimed 'lucky'....however, they were quite a bit 'luckier' than the Jewish population of Europe...including the Low Countries, or the Caucasian...hell any non-Japanese population of Japan or Japanese conquered territories.

An earlier poster made claims of starvation, death, beatings and lack of medical attention at US internment camps for Japanese Americans in an attempt at coloring everyone with the same brush...he is wrong...that is the point of my posts.

no one said they were the same, far from it. One was an extermination camp the other an internment camp no comparison. Some internment camps were by far better than some others, and early in the war the treatment was worse, no doubt because of Pearl harbor. I'm not trying to put a "value" on war crimes, that seems to be everyone elses job. There is no doubt if you are wieghing the enormity of the war crimes, the ones committed by the Axis Powers are the worst, hands down, followed closely by the Russians who were our allies. No attempt at "coloring with the same brush"...what I said is there was little difference to a causulty of either one, dead is dead. Are you trying to say that the allies committed no war crimes? or do you not like hearing about them? Are you a revisionist historian? Because thiers are worse ours don't count?

It seems maybe we need a thread where some here can rate the war crimes, on a scale of 1 to 100, and THEN it gives you all a great base to argue over.

I guess an analogy is you are in a white suit, while there is no argueing that one stain is by far worse than another, but in both cases the suit is stained.

Take a look at the literature the two experiences generated, too. The economic hardships on US citizens of Japanese ethnicity were real. But look at the hardships of European Jews or Chinese in Japanese-occupied China. They suffered hardships that can't be re-paid.
You must log in or register to reply here.
Share:
Facebook Twitter Reddit Pinterest Tumblr WhatsApp Email Link
Top