One of my favorite science fiction books of all time is the classic Downbelow Station by CJ Cheryl. Why I so love this book is because it is one of the few science fiction tales that really pounds home the idea that outer space can be a dark place. And by “dark” I don’t just mean metaphorically dark, albeit it can be just that too, but visually dark like the darkest night.

The scene in question involves an argument between the manager of "Downbelow Station," an orbital space station that orbits an alien world far from earth, and his wife. Now, bear in mind that I don't have the book in front of me, and it has been more than a few years since I have read it, so what I am going to relate now is just my imperfect recollection of the scene. Having said that, I am confident this is precisely correct. The argument starts when this manager makes an off the cuff comment about the difficulties of living on a space station. His wife (I really should google the character names but I am too lazy tonight!) gets peeved by this comment because she comes from a long line of "merchanters," that is, crewmen who staff the freighters that ply the interstellar space lanes. In a fit of annoyance she tells him that he has no idea what “difficult” is until he has manned a freighter in the dark depths of space. She reminds him that station managers and “blue skiers,” her term for people who live planetside, always have the comfort of a planet down below or a sky overhead. Not for merchanters. These souls are all alone in outer space, completely confined to the cramped interior of their ship and isolated from the rest of humanity by vast distances. They don’t have the luxury of unmoving ground beneath their feet. Nor can they look forward to a sunrise that will break the endless gloom of their interior cabins. She begins to wax poetic by describing these merchant vessels as glowing embers cast off from the campfire of humanity into a vast, inky black night. What is more, that night is not only oppressively black but is also doing everything it can to snuff out that glowing spark. “Old Man Black,” as she refers to deep space, wants to swallow up the light the ship brings with it, something that is only prevented by the few millimeters of metal that comprises the ship’s hull. This is the harsh reality of living the merchant life: being utterly alone in an endless claustrophobic darkness that is constantly trying to sneak aboard the vessel via a maintenance failure and kill the entire crew. Living aboard a gloomy tincan that sails a frozen black ocean is truly “difficult.” Needless to say, her husband gets the message.

Isn’t that a great description? I always found Cheryl’s use of light and darkness not only to be wonderfully moody, but also an apt metaphor for civilization’s struggle against the wilderness. Cheryl’s description has always resonated strongly with me because it just felt right. It is properly atmospheric in a very film noir kind of way. Sadly, very few movies or television shows have ever embraced outer space with such a dark vision. In fact, the only ones that come to mind are Ridley Scott’s Alien (he got both the gloom and the cramped ship interiors exactly right!), the sadly forgotten Outland, and anime’s Cowboy Bebop (in my opinion, still the best science fiction show ever put on the small screen). Other than those three, most sci-fi visions seem to go for the bright and luxurious route of the space life as seen in Star Trek (the Enterprise might as well be a floating Hilton Hotel in space) and Star Wars (those Star Destroyers are all about shiny luxury!). Shame. Space is best when it is noir, both literally and figuratively.

So, why am I blathering on about this? Well, because I have to give a shout out to a game that I haven’t been too kind to lately: Elite: Dangerous. Don’t get me wrong, I always liked the idea behind the game, and even found the core engine to be solid - the planetary surface generation engine really impresses me - but the execution has been, well, somewhat haphazard and sloppy. For a while there, every time Frontier touched the game with a patch or new content the game seemed to get worse! But I am now happy to say that with the release of "Engineers" the game now feels like a proper v1.0. As a result, for the first time since it was released I am truly enjoying the experience and logging some serious hours in it. I am a happy space trucker.

One thing that has come to my attention about the game is how...wait for it...dark the game is at times. Really, it is the first space game since Eve Online to come close to Cheryl’s vision. In a world where science fiction movies and space games often look like this: 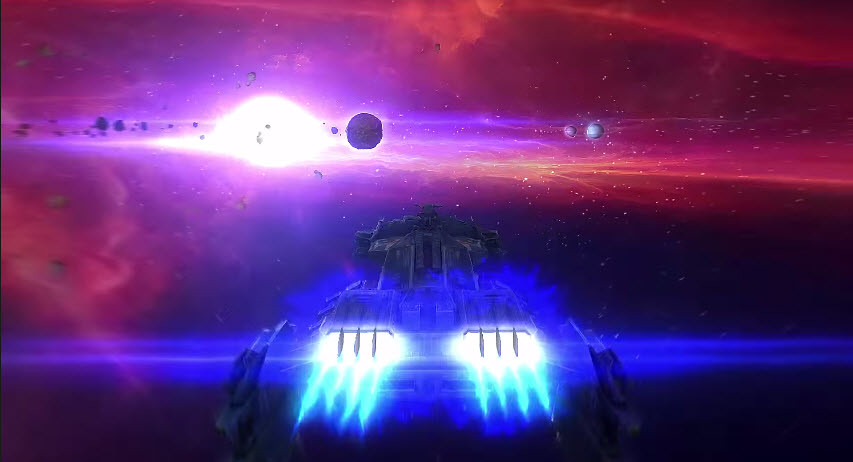 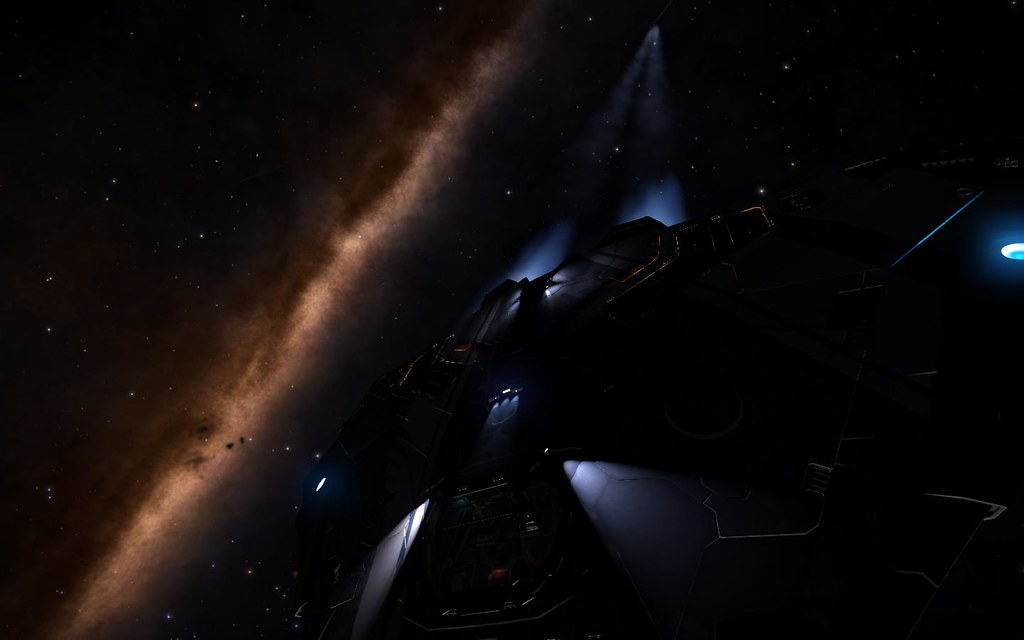 In fact, it was that last shot that really caught my attention. Or, more to the point, the ship's running lights that did. Most space games are so bright that such lighting would never even show up. Here, it really adds a film noir moodiness to the shot, demonstrating how dark the environs of space can be. This is something even reinforced by your cockpit interior:

The surface of planets can be just as dark. Here I am descending onto a world seemingly lost in darkness:

Close to the surface, I hit my floods:

Still awful gloomy. Driving around on a planet can be a downright spooky experience at times, especially when under skies such as this: 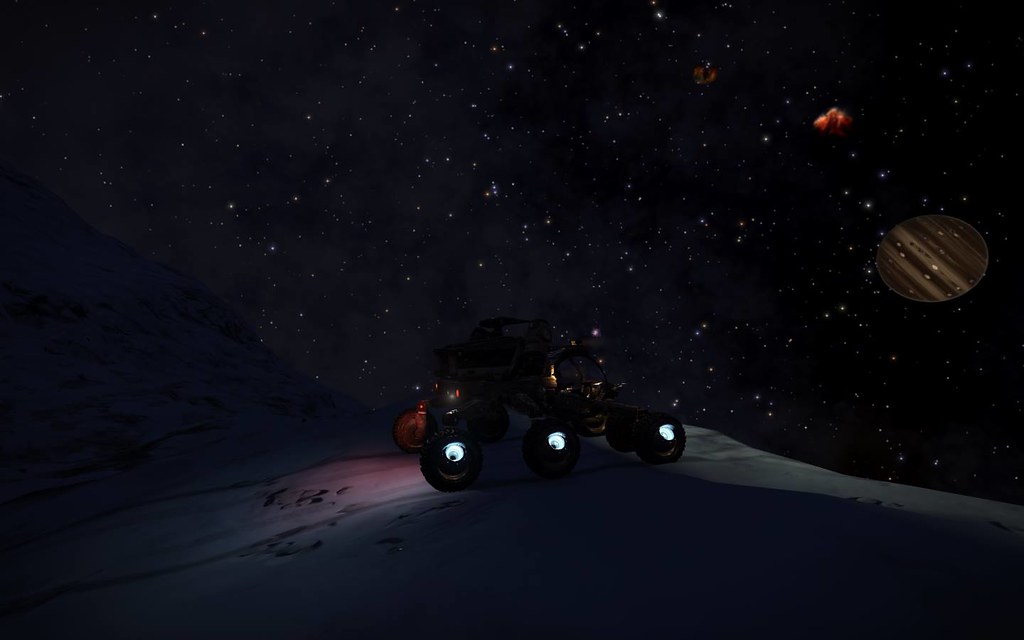 Frontier even made station interiors nicely dark and moody:

Now, this is not to say that you won't find plenty of bright spots in Elite: Dangerous. You will, given the correct orbital mechanics. 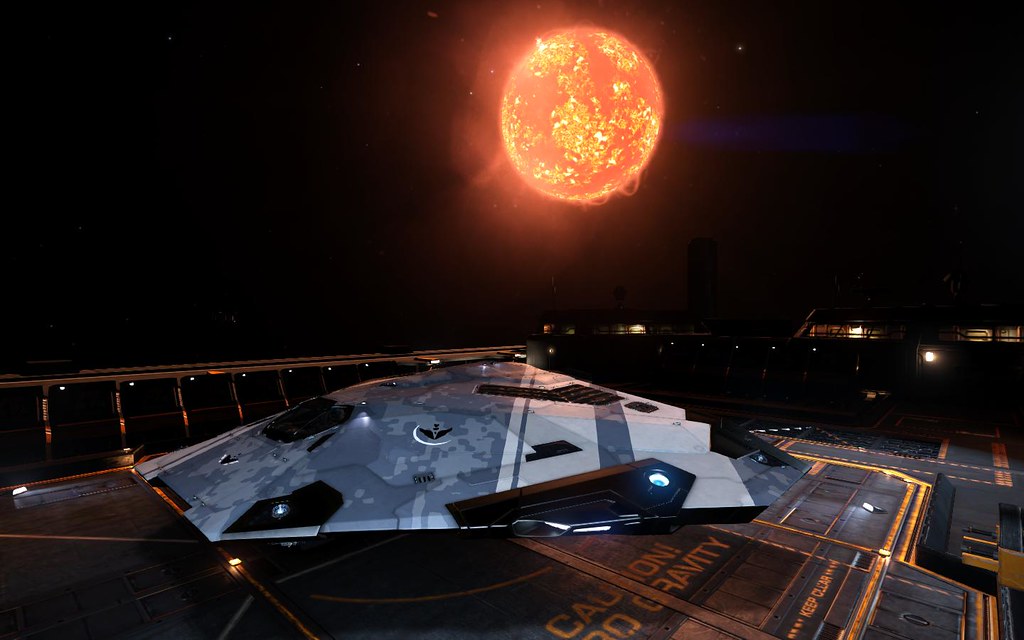 But even when there is a sun on the horizon, it still can seem like Old Man Black is trying to gobble up the light. 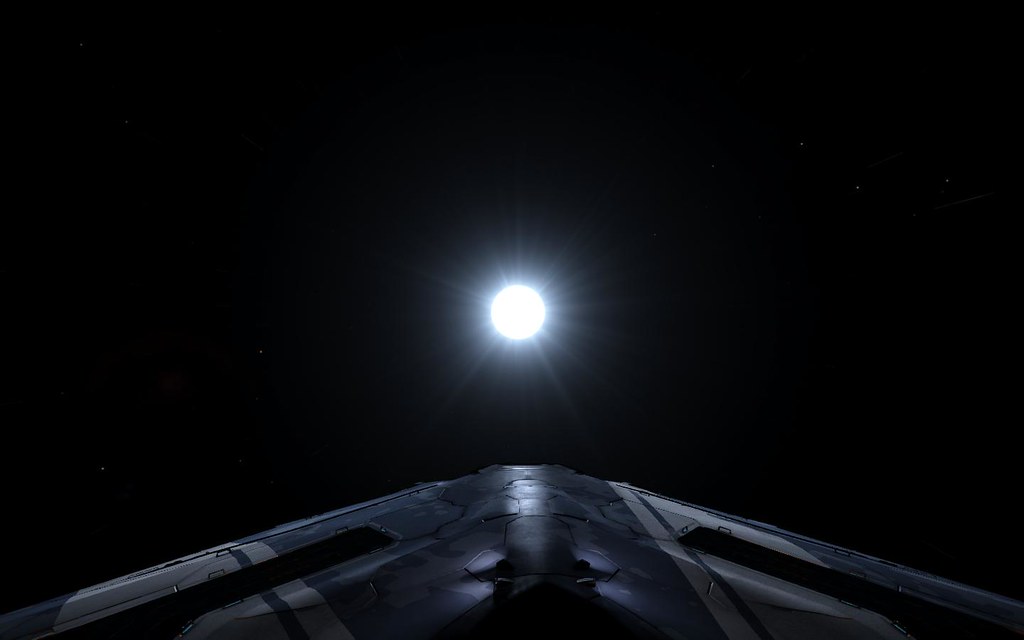