I've decided I don't like the 2D terrain in JTS Seven Years War so I've put together a little mod that harmonizes it with my Napoleonic mods.

The problem with the terrain in the release version is that although it's readily apparent that hexes are at different elevations, it's hard tell which ones are higher and lower.

This mod uses most of the symbols from the Napoleonic mod. Apart from slight repaint of the unlimbered artillery symbol, the only innovation is the infantry marching column symbol (looks very similar to the infantry line symbol, only grey).

The mod also replaces the game's Musket and Pike victory music with something a little more appropriate to the period. I've also included two desktop icons that can be used to distinguish battle scenarios from campaign games. 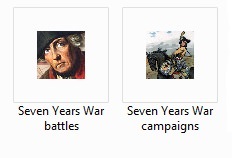 I've added a link for downloading this mod to the complete list of links for my Napoleonic mods.

In addition, the mod can be downloaded from here:

In case anyone was wondering, this mod will work with the latest official game patch, but make sure you install the mod AFTER you install the patch (or re-install the mod if you patch a modded version of the game).
You must log in or register to reply here.
Share:
Facebook Twitter Reddit Pinterest Tumblr WhatsApp Email Link
Top