Why was the Russian 76.2mm PP obr. 27 so much heavier than the German 7.5cm leIG 18? The Russian gun was twice as heavy. It did have twice the range, but for an infantry gun, small and light is what I'd want.

Hmm, the Italian 65mm INF and the Japanese Year-41 weighed in between the two guns, yet have a m10 just like the German.

What we know as infantry guns came out of WW1 experience. I wonder if the different weights came about as a result of the differing experience from the Western and Eastern Fronts. From the WF with its much more restrictive and torn up landscape might have come the desire to reduce weight and increase mobility as a primary design objective, compared to the EF. The experience from the more open WW1 EF possibly suggested that greater range might have been more important.

The Soviet gun seems to be a reduced weight outgrowth of the standard WW1 76.2mm field pieces, while the German 7.5cm lIG 18 and Japanese 70mm were designed from scratch to be as light as possible. The Italian 65mm started life in 1913 as a mountain artillery gun and when replaced by 75mm pieces was passed onto the infantry, so really was not originally intended as an INF.

Warning: All the above possible design philosophies are just my speculation.

The barrel length is 4' 1" vs 3' for the German gun. That will add weight. Plus with the higher muzzle velocity (which is what gives it the range) it will require more recoil mechanism and a thicker barrel.

I also suspect the quality of the metals and the machining used in the German guns enabled it to be lighter.

Bob Walters said:
I also suspect the quality of the metals and the machining used in the German guns enabled it to be lighter.
Click to expand...

perhaps up to about 1941. Beyond that date, any manufacture of military materials in Nazi Germany tended to have a much less overall quality than comparable Allied country- manufactured material.

By my best estimate, the extra foot of gun barrel adds at most around 100 pounds. As a wild guess, the recoil mechanism might add 100-200 pounds more. That explains less than half the difference. The carriage would probably have to be heavier too because of the additional weight of the barrel & recoil mechanism and the additional recoil force. All told that might explain half the difference between the two guns.

The german ammo was probably lighter as it had such less range, but I don't know about the Italian or Japanese guns. There's a recent book that is a memoir of a Russian soldier that pushed the INF guns all over the Ukraine and then to the Baltic states; it's not a great read but it was kinda interesting.

witchbottles said:
perhaps up to about 1941. Beyond that date, any manufacture of military materials in Nazi Germany tended to have a much less overall quality than comparable Allied country- manufactured material.
Click to expand...

The problem for the Germans later in the war was that they could not get hold of some components neccessary for some varieties of steel in sufficient amounts (such as chrome, molybden, for example).

The Germans were certainly able to manufacture high quality but were lacking raw materials.

For those interested in how the 13th company of the German Infantry Regts. operated, this is a great read...

The author describes many combat actions and it seems that the 7,5 cm IG and 15,0 cm IG were used primarily as the Regts. indirect artillery. It was rarely used in direct fire like many wargamers think. The 13th company was a large formation at 300 some men, and as the war wore on, this became an issue. The author describes the company as not being very good in mobile situations (horse drawn), and they would often just use the 7,5cm weapons and leave the 15,0cm weapons 'hooked-up'. They were often the first unit to leave during a retreat due to the 'pack-up' of weapons and ammunition. A fascinating fact is that the 13th company was given three 12,0 cm mortars in 1942. Photographic evidence shows them to be the German model. This weapon greatly increased the company's firepower and was not a replacement for either the 7,5 cm or 15,0 cm IG.

WWII saw the end of Infantry Guns including the US Army rethinking it's own 105mm Regimental guns (used almost exclusively indirect and even in concert with the Divisional 105mm). Weapons like recoilless rifles and larger bazookas could handle the direct fire needs better than a vulnerable IG. Heavy mortars like the 4.2 inch and 120mm models became the preferred weapon at Regimental level. Increased communications made using proper Divisional artillery easier and the initial need for infantry guns, that is, some cannon that could support the front line guys faster, became moot.

The Germans used all the Soviet infantry guns they could capture. They produced ammunition and HEAT rounds for them. The author describes how wire communications were actually preferred, and infantry guns might have been better as far as being only 1-2 miles from the front line. I suppose the North Koreans or Chinese may have used them in the Korean War along with a lot of other WWII weapons.

Here is an interesting late war video...note the Soviet weapons used by the Germans...look carefully at the infantry gun and the size of the ammunition they are using...

I think that video may show something that is not known...that is, the round that is being loaded is not a 'Soviet' round! The weapon may be reamed out to take a German Pak 36 7,62 cm (aka Pak40 brass) ammunition. To be even more clear, it has been modified to fire the 'full monty' converted F-22 round! It appears to be too long to be the Soviet round...

I always figured the weight is why the soviets supplanted this weapon with the m1943 OB-25 gun. Essentially the same gun on the 45mm AT gun carriage it weighed hundreds of pounds less. Since the only difference in ASL terms would be the m# I can see why the designers left it out of the game, still it wasn't all that rare late war (based on the production numbers) and it might be interesting to see in the counter mix of a future product someday.

The m1943 OB-25 gun was really a redesign and also a design 'rethink' on what these weapons were for. The ammunition was not the same as the earlier 76 mm regimental gun M1927. The projectiles were the same but the whole ammunition cartridge was smaller.

The Soviets had wanted a redesign of the M1927 but were stuck on armor penetration specs. It was finally realized that armor had got too thick on AFV and that HEAT was the only way to go and velocity was not a criteria anymore. The Soviets did use these weapons in more of a direct fire method than the Germans. Compare the elevation specs and it is obvious that the Germans 7,5 cm leichtes Infanteriegeschütz 18 (73 degrees) was really a howitzer capable of firing in the upper-register. It was also capable of using semi-fixed ammunition allowing charge variance. The Soviets basically had fixed ammunition.

The Germans later in the war (late 44) also had the 7.5 cm Infanteriegeschütz 37 (7.5 cm IG 37) which had a limited elevation and basically was a direct fire support weapon. The main 'advantage' may be a better antitank capability but I doubt it.

I suppose a picture is worth a thousand words.... the pic shows the 7,5 cm IG cartridges...HE on the Left and HEAT on the right...

Below: This is the widely used HE that T-34 and SU-76 and ZIS-3 etc. guns as well as the 1927 used...clearly a good concept but for the infantry guns in non-motorized formations, it is very bulky and the Soviets saw that a smaller cartridge was better... 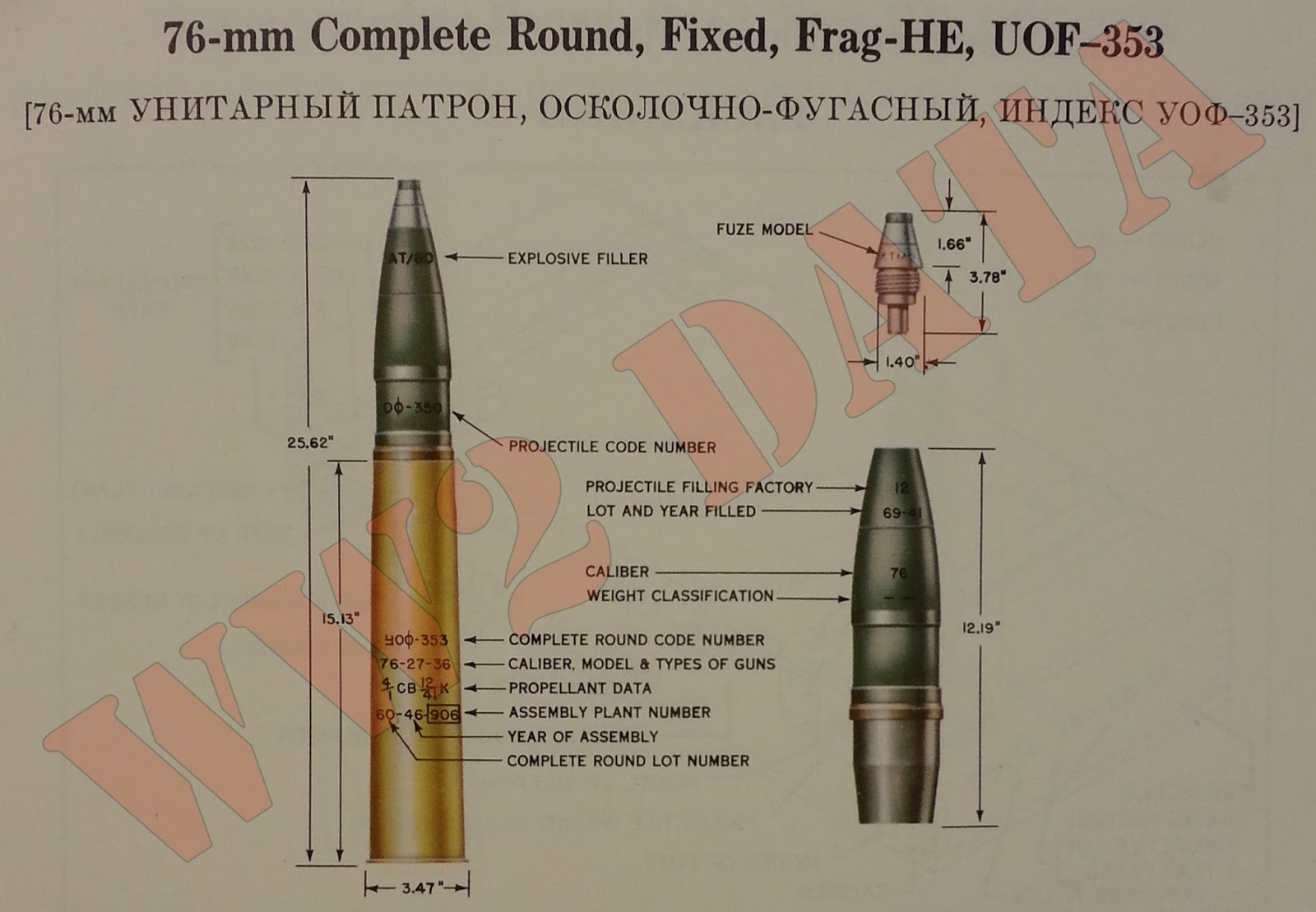 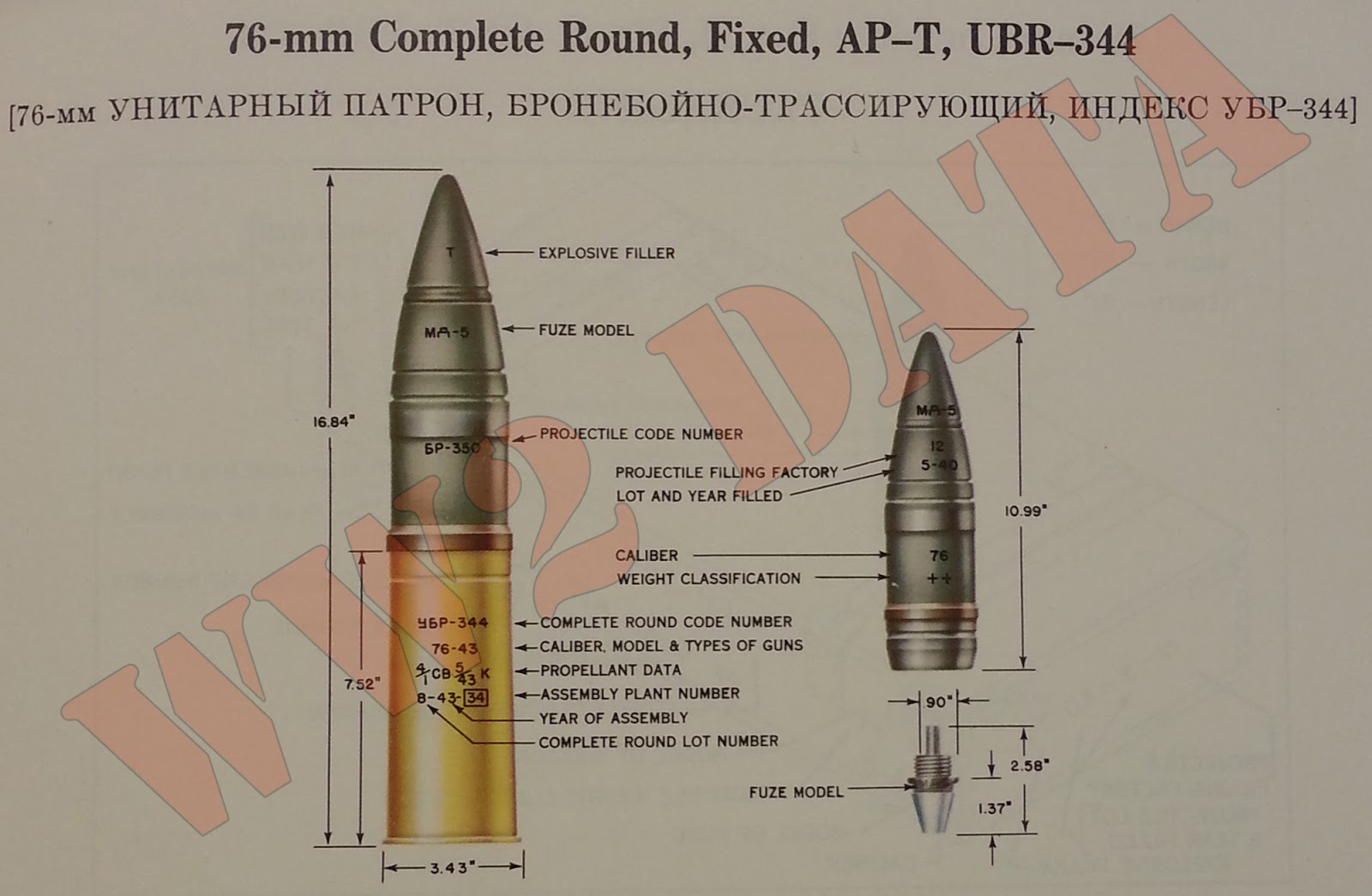