Elite Dangerous: The Mundane Adventures of a Drunk Pilot II 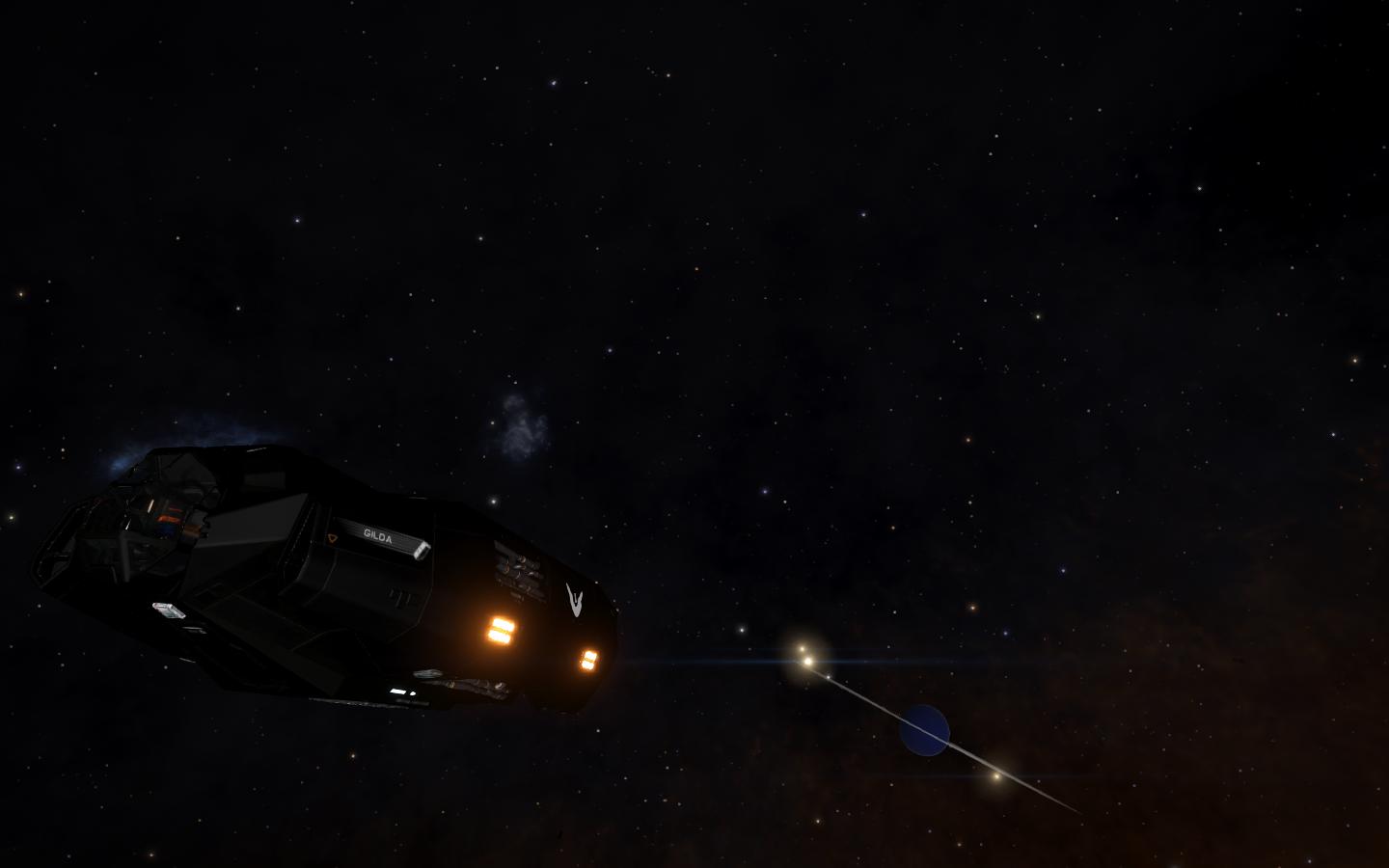 ​
The sun was gorgeous, like a dollop of incandescent honey in the sky, and made my skin rejoice at its touch. Not to be outdone, the surrounding sky was less sky and more of a flawless azure canopy that seemed so close that it seemed like I could swim my fingers in it with the barest of efforts. I inhaled deeply, luxuriating in the sweet smell of the cut green grass that spread before me in all directions to a horizon dotted with tall brown trees crowned with dark green foliage. I squatted down and ran my fingers through the grass and the loamy earth below. Warm and soft. And reassuring.

I walked down a gentle sloping hill, celebrating the free air and the open space, and stopped at a crystalline stream that gently tumbled its way across my path at the base of the hill. It refracted the sunlight beautifully and nearly hypnotized me in its shimmering, silvery way. I dipped my fingers and felt the coolness of the water. It made its own music too, a type of delicate tinkle that reminded me of windchimes on a breezy day. Surely this was paradise.

I sat down next to the stream and began to pluck the grass from the ground with joyful abandon. All was as it should be: clear and calm. The land was at peace with itself.

But something began to annoy me, a "something" that soon resolved itself into an annoying buzz in the distance. Like fingernails on a chalkboard, this seemingly distant sound put my nerves on edge and quickly spoiled my languid, summer-day mood. Darn it, where was that coming from? I stood and began running in its direction, intent on finding the source of this noise, this electronic screeching that had no place in Paradise, and strangle the life out of it. As I ran, I noticed the sky began to darken as the sun turned an ugly brown, the sky darkened and the grass began to whither and die. "No! No! No!" I bellowed in my rage. "Not here! Not now!" But I was losing the race. The destruction of this green glade was nearly complete and I was no closer to the mysterious agent of destruction. "I will find you! I will get y...."

I woke with a start. I found myself staring at cold, bluish LED lighting above me. "What the..." I mumbled as I tried to sit up from the hard floor below me. As my left hand tried to find leverage, it slipped on what felt like a bottle that quickly skidded away under the pressure. Recovering my balance, I finally managed to sit upright and keep my blurry eyes open long enough to see where I was.

​
Offutt. Still only in Offutt.

I ran my hand over my stubbled face as my brain started to function again. Yeah, now I remember. I had a string of particularly good trading runs over the last few weeks and decided to splurge a bit on wine, dames and song. Unfortunately, the bit soon expanded in a barrel and I found myself going over the edge with the rams. I dreaded to check my credit balance.

I staggered to my feet, threw myself into the commander's chair of my Lakon-6, and hit the stud to disable a damnable electronic chirping. It was my AI assistant notifying me of something I needed to see in my news feed. With a start I realized that it was also the thief that stole my paradisiacal dream, and safely reinterred me in my portable metal coffin where I could slowly smother in orbital cycles. Visions of idyllic gardens had to wait until I took the big sleep.

I hit the stud again to see what was so darn important. 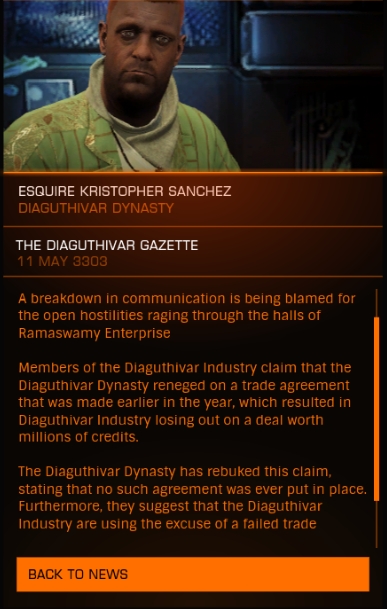 ​
Oh. Apparently a civil war had broken out since my, er, celebration had begun. Amazing what can happen while you're drunk out of your mind. Well, can't blame my AI assistant. It's never a good idea to hang around a system in a state of war. Well, unless you are game to take a few risks to earn some scratch.

Forty-five minutes later, with a shower, a nuked breakfast, and a handful of pain pills in me, I started perusing the Offutt Enterprise's jobs board. Sure enough, there were missions aplenty as a result of hostilities. I quickly grabbed a salvage mission.

​
Generally speaking, I don't prefer such missions as a Lakon-6 is little more than a flying cargo container with a spacious view. If I get into trouble, my two bean-shooters, a modified minigun and railgun, would do little against all but the most incompetent of opponents. But the state of civil war made less adventurous mission scarce, so I had to take what I could even if the 51K berries it would net me was't that great a payout.

Suited up and strapped in, I brought my vessel, Gilda, up on the silver platter and warmed the systems up, enjoying the view as I did so. It wasn't green, but it had its own kind of beauty.

​
I set the destination for my contract, system LTT 11648, and prepared to make the 3.47LY jump. Once given the all clear by traffic control, Gilda and I were off.

I exited witchspace with a bang, and was greeted by the system's primary. Sadly, the nav beacon was on the other side of the fusion reactor.

​
No biggie. My crate had some great legs and we got there in short order. I found the nav beacon and searched the database:

Thanks for the dope, Mr. Sanchez! Off we go before someone drops a dime on us.

LTT 11648 6 was just short of 3K LS, so we had a short hop. Regardless, I held my breath the whole way. When you dig in somebody's underwear draw, expect trouble.

We arrived at a spectacular ringed planet. Quite a dame, this one. 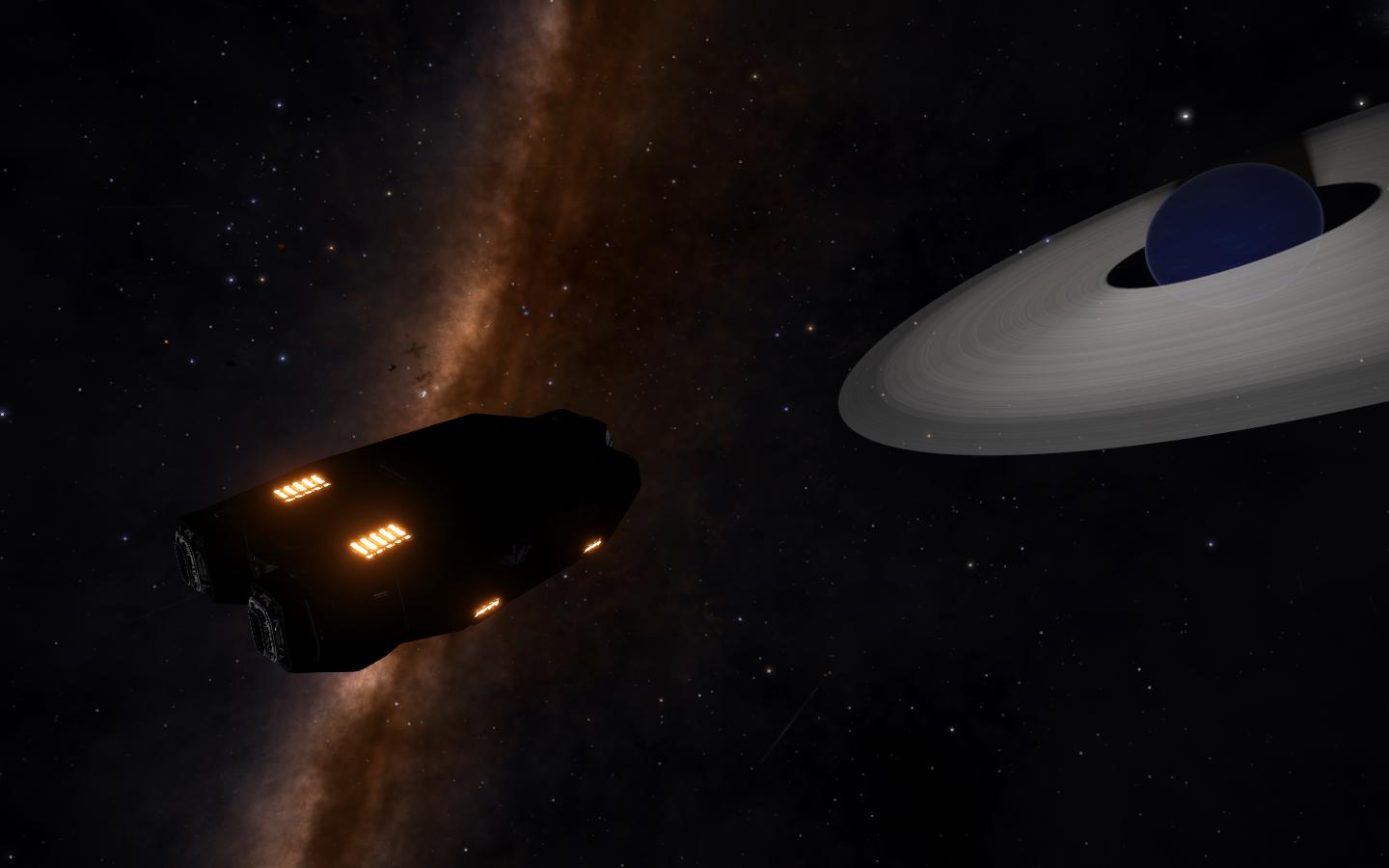 ​
Wow. No substitute for the green fields of earth, but it'll do.

​
No time for sightseeing. Back to work.

I orbited the gas giant until my sensor suite picked up a likely candidate for the salvage op. Looks like someone was attempting to duck into the rings for cover.

​
I set about picking the bones of the carcass, coming away with some cargo containers of clothing, water, hydrogen fuel, and biowaste. Oh, and the rebel transmissions. Fortunately, we were left undisturbed while I did my scooping. But I do confess to jumping a little when my inbox suddenly chirped:

​
I asked him what the griff was, but he assured me just a change of destination for "security reasons." I didn't like that, but what choice did I have if I wanted to get paid?

I set the destination to Wiberg Hub and crossed my fingers that this wasn't a doublecross.

​
It sure was a pretty place for a doublecross, if that was what it was. 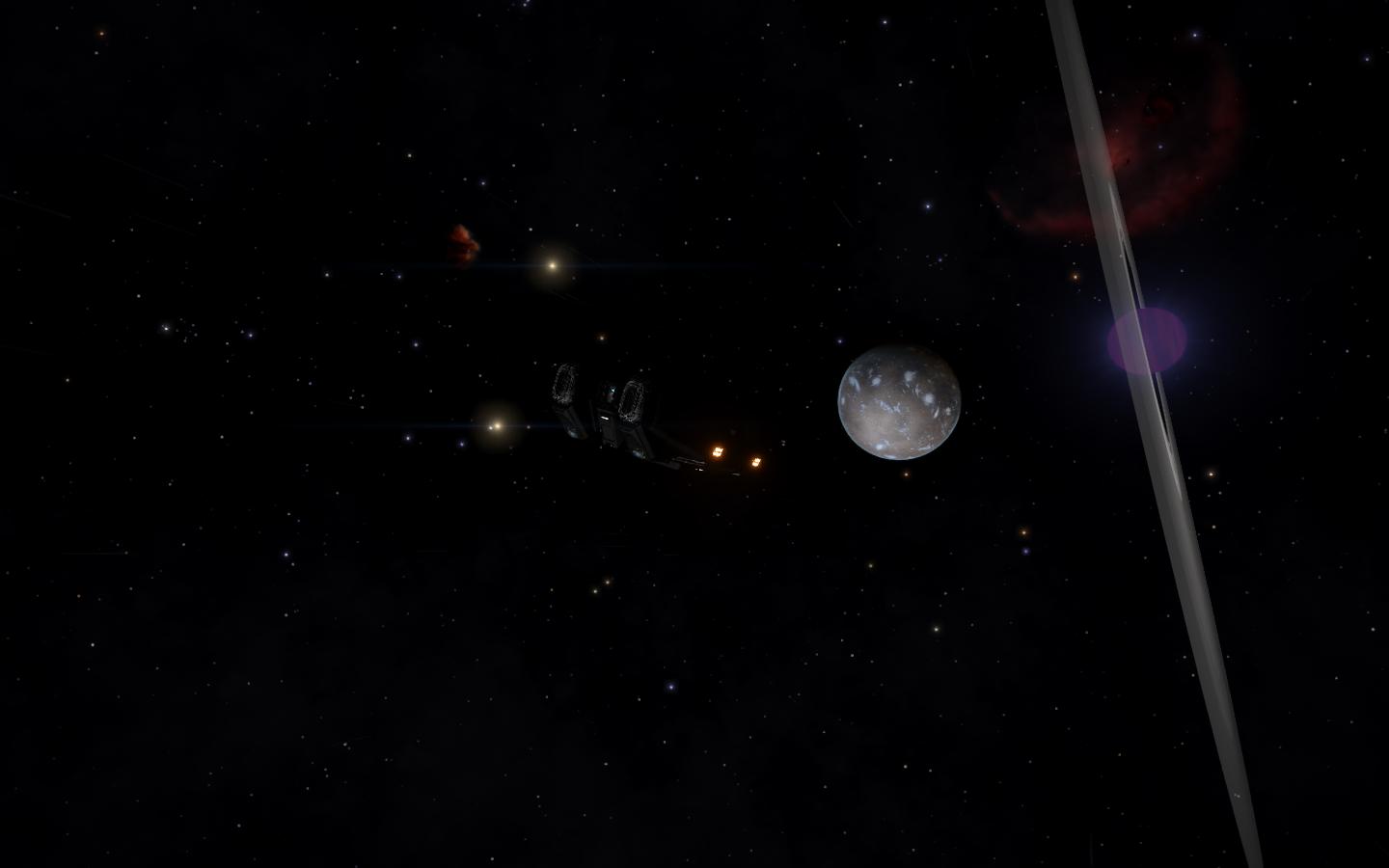 ​
I maneuvered Gilda between the two bodies and approached the station. 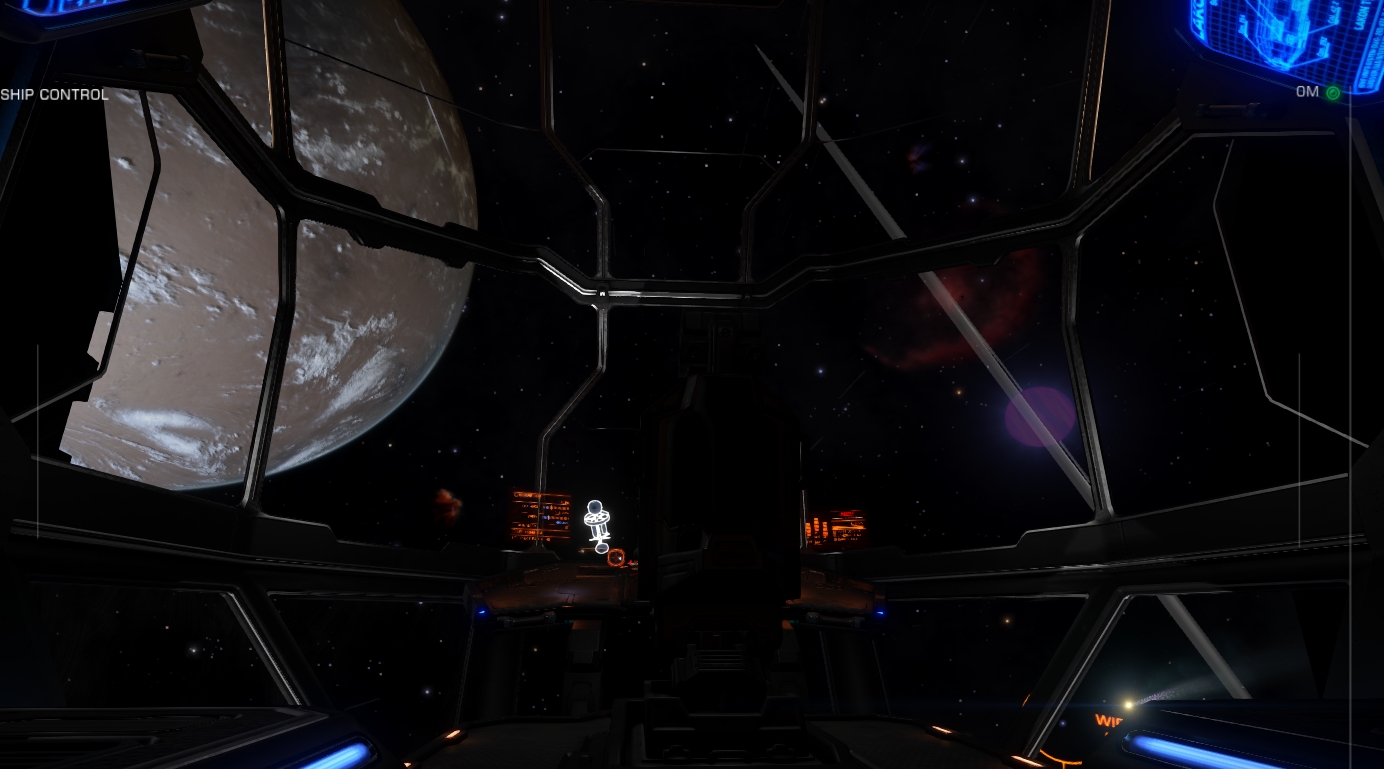 I exited supercruise and breathed a sigh of relief when we were safely in the station's no heater zone. 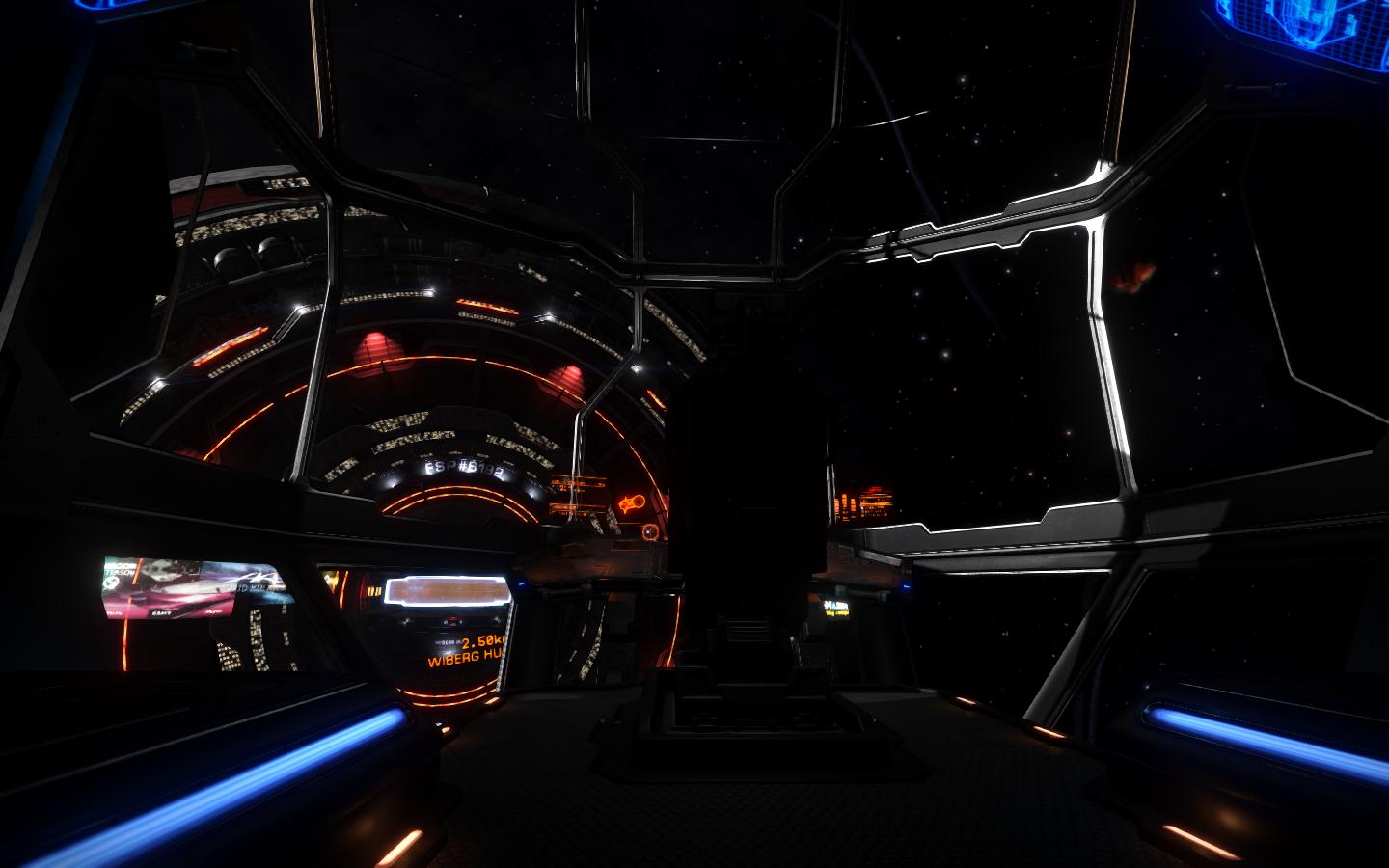 ​
I allowed my docking computer to take us in as I headed to my small galley to grab some eel juice. When I returned, I could see that Wiberg Hub was an industrial station. Yuck. They get grit all over my girl's hull. 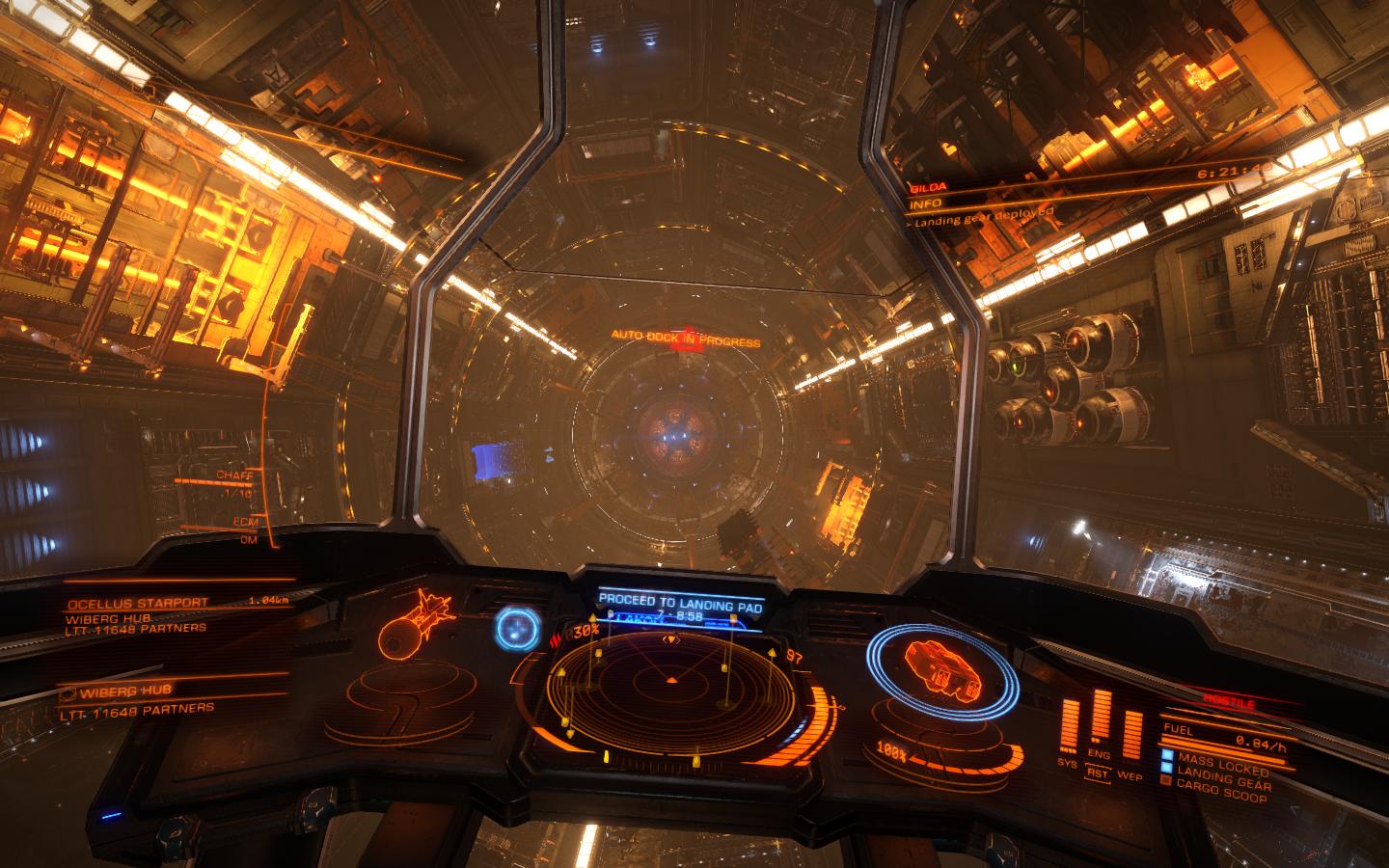 ​
With flight control giving us the all clear, the autodock set us neatly on the messy platter. 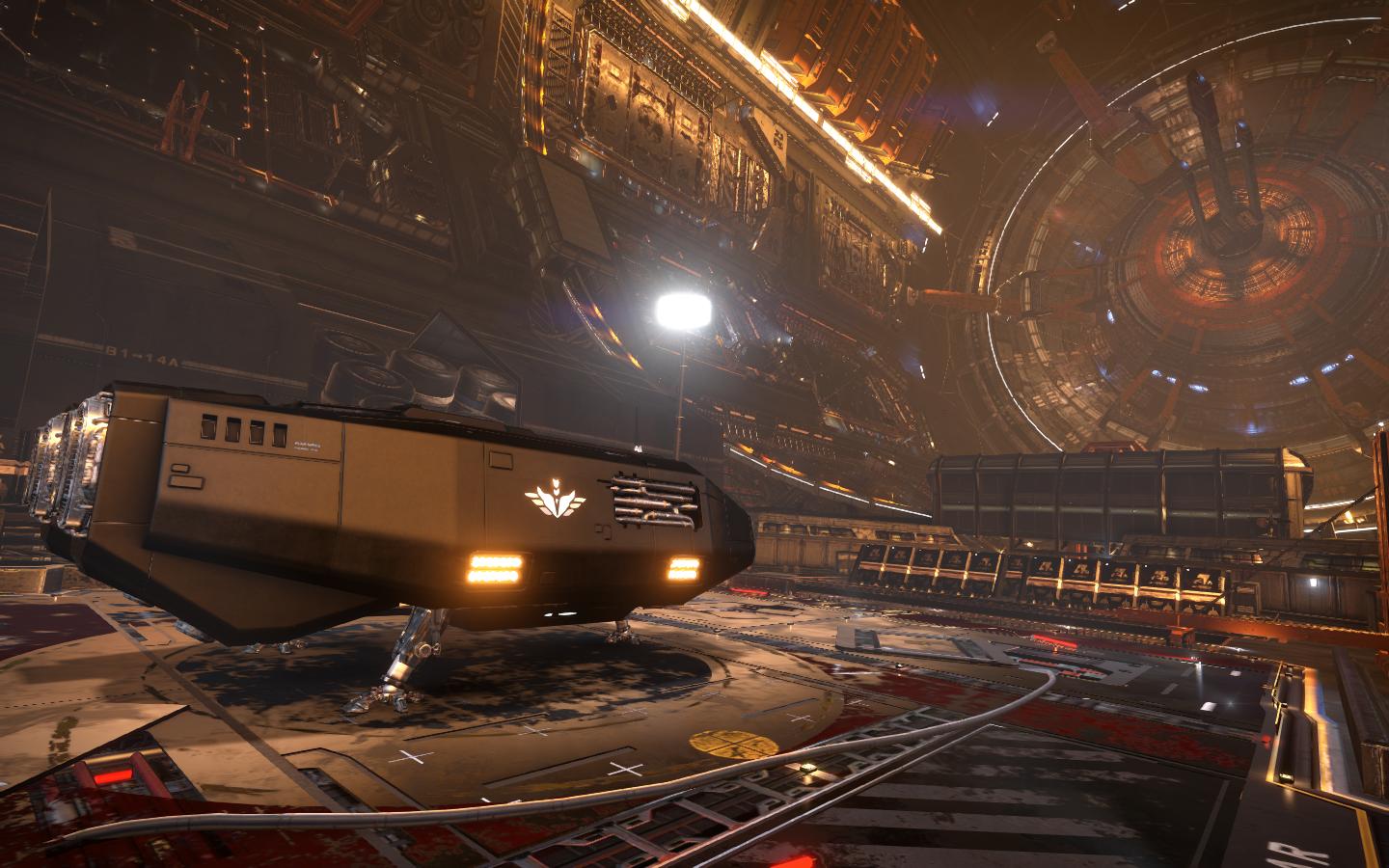 The high pillow of Wiberg Hub greeted me.

I quickly called up Sanchez and notified him that we had arrived, incident free. He seemed please and even added some extra credits to my payout for the inconvenience of the detour.

I wonder if they have a gin mill that caters to the interred dead on this tub?