Elite Dangerous: Living on the Edge

​
Being a pilot in a galaxy that spans 400 billion star systems is certainly an edgy profession. Most denizens of the galaxy readily acknowledge it as such. The problem with that description, however, arrives when you ask just why it is considered to be so “edgy.” In the vast majority of cases, people usually cite the most obvious reason: danger. Danger from space pirates, danger from unexpected “space weather” (such as synchrotron radiation), or the more mundane varieties of danger, such as equipment failure that can leave your adrift or dead, or even just plain bad luck - and believe me, in a galaxy as big as ours, the opportunities for bad luck are endless.

While all those dangers are real, and do contribute to the edginess of the profession, the real edginess is found in innerspace - the pilot’s mind. This is something that most “blue skiers” never realize as they dream about a career in space while gazing up at the stars from the comfort of their spacious backyards, no doubt on some warm, summer evening. Life in space is requires a very different mindset from being a ground pounder. To begin with, being a pilot is little different from being a frozen dinner. What I mean by that is that those of us who ply the void spend the totality of our time in a sealed, claustrophobic container that travels across the infinitely big freezer known as “space,” only to dock at a slightly larger sealed, claustrophobic container known as a space station or lunar base. That is what it means to be a pilot. No more warm summer breezes, no more distant blue skies, no more open, green fields. Instead, it is a life of chill recirculated air, of low metal ceilings, and of cramped ship quarters. Even a window view on a space station is reserved for the rich and powerful. If you want to be a pilot, I hope you are comfortable with an aisle seat for the rest of your life.

Welcome to the dark, cramped life of a pilot
​
It is also a life of darkness, if not necessarily the moral kind. Space is the endless night. Sure, when one exits witchspace and comes face to face with the magnificence of a sun, it can be an incredible sight. But that is the exception. Most of the time the pilot lives by the dim lighting of his holographic HUD display or by his running lights. Even station interiors offer little respite as pools of darkness seem to bubble up out of the ether and slowly spread everywhere, hence the desperate attempt to keep the darkness at bay with the use of ample spotlighting, a de rigueur feature of human settlements everywhere.

At times it can feel like being trapped between two implacable enemies: the fiend Smother and the villain Darkness.

If all of that wasn’t sufficient to make life a truly edge-case scenario, then you have one more thing to contend with: agoraphobia. Ironic, no? Oh, I know I just told you how claustrophobic life can be as a frozen dinner, but there is an important consideration to keep in mind: you might be living the life of a frozen dinner, but it is the life of a frozen dinner teetering at the edge of an endless abyss. Lose your balance but for a moment and you might well be swallowed up and never be seen again.

This is actually a recent realization for me, one that struck home when I saw this news announcement posted on GALNET:

​
You see, I have been on the hunt for meta-alloys for quite some time now. Specifically, I need one unit of meta-alloys to bribe my way into the good graces of mad scientist-engineer Felicity Farseer, a supposed wiz with all manners of propulsion. After reading this news blurb, I promptly checked my map to see just how far away Merope was. That is when I got the shock of my life.

The following map depicts my current position in the galaxy (yellow dot), with the red tail being a record of my galactic meanderings.

Map courtesy of EDDiscovery​
I had quite the road trip! As you can see, the vast bulk of my travels have been north of the galactic plane (the grey shaded area). In fact, the only reason why I made the sudden dive was to prepare for my jump off to Merope. The last destination (again, the yellow dot) marks the location of industrial outpost Andree Arena in the Konejani System, the last flickering flame of civilization until I come to Merope. How far from here is it to my destination? This far:

​
Excuse me while I hyperventilate.

As you can see, I am going to need to take a heck of a deep dive into the abyss to get my meta-alloys. I will be leaving humanity behind (all those blue dots) and roughing it on my own for quite a ways. Now do you understand how claustrophobia can give way to agoraphobia? Do you feel the edge?

Before I could stop to think, I set course for Andree Arena. Upon exiting supercruise and making my landing approach, I thought the scene before me was entirely appropriate for a station on the edge of nowhere. A little outpost orbiting a hauntingly dark moon, with blue nebulae singing their siren songs to lure travelers to their doom (unless I miss my mark, I believe the lower nebula will be my final destination). 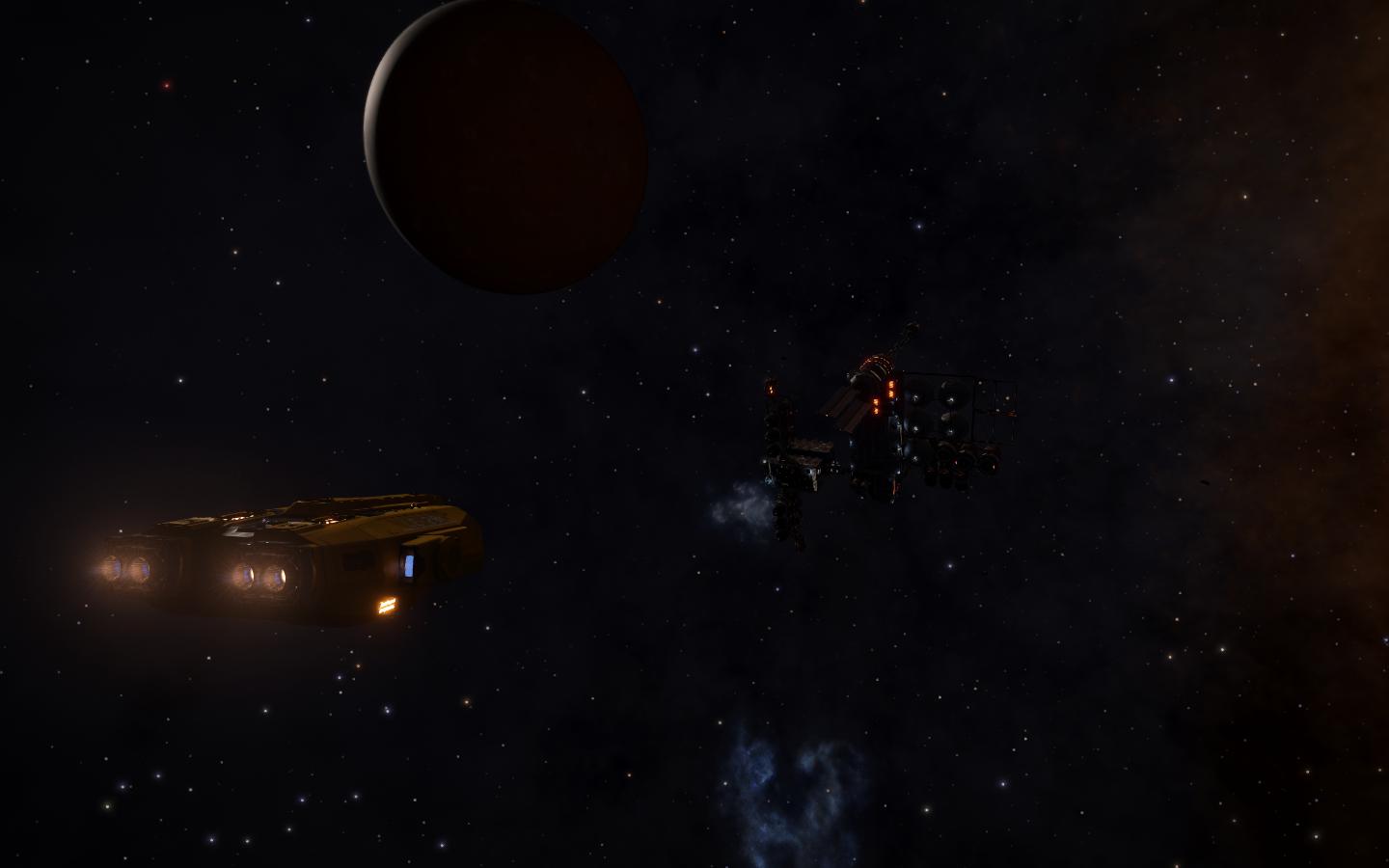 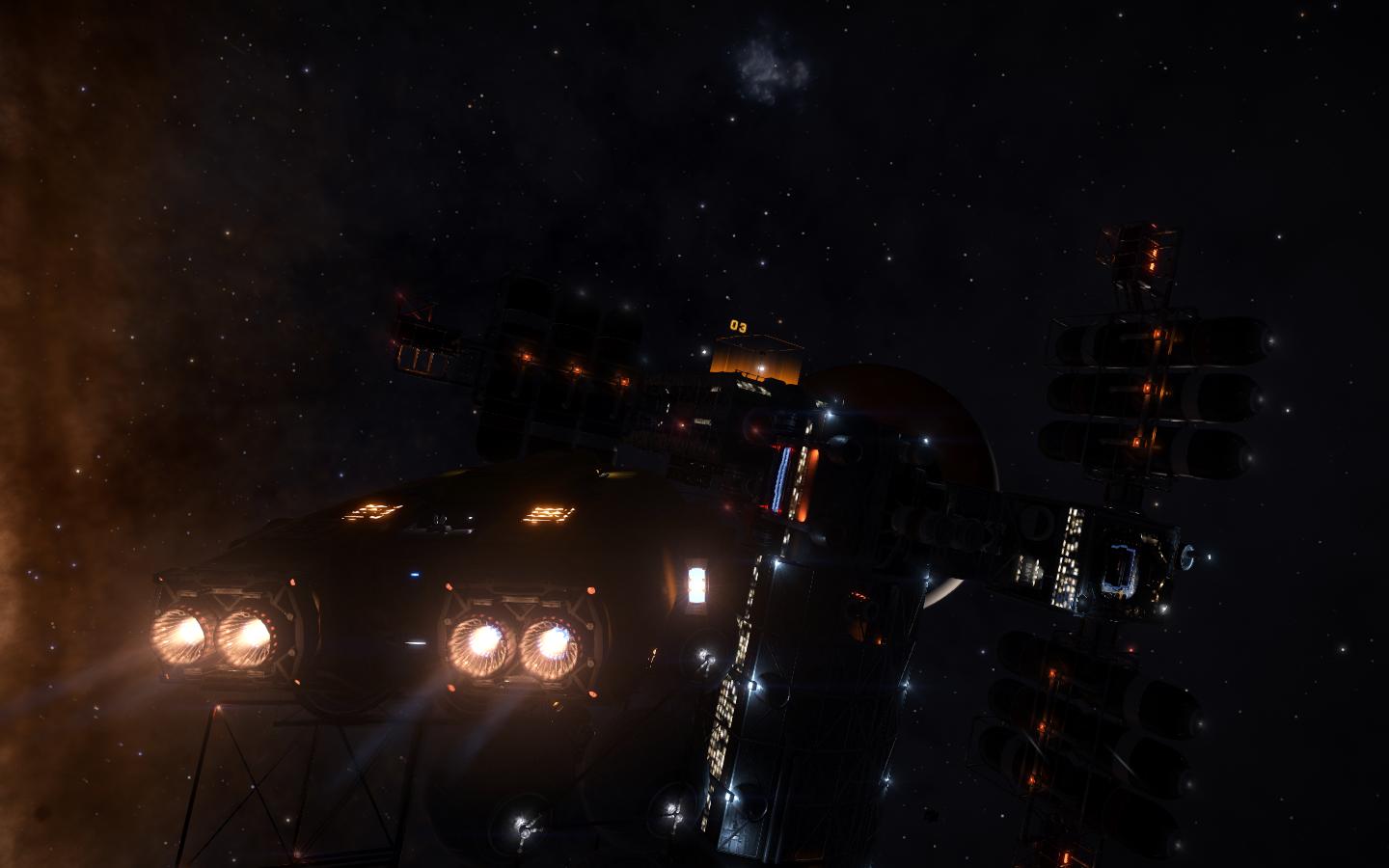 ​
Upon landing I was greeted by the station administrator. I will say he certainly had that post-apocalyptic, Col. Kurtz look to him. 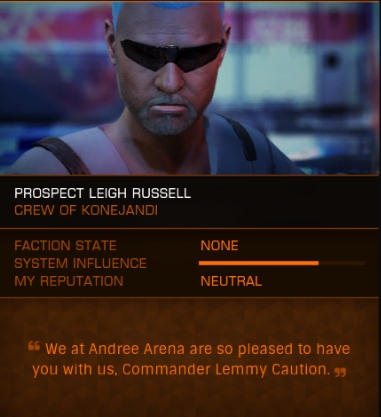 I guess you have to be a tough son of a gun to manage a station that teeters on the edge of the Big Nothing.

It was at this point I suddenly found myself having second thoughts about my great expedition. Maybe, just maybe, I should think this through a bit more. Like I said earlier, being a pilot is to live life on the edge, sometimes literally. Taking that final, fateful step is not something done lightly, especially considering the potential dangers involved, doubly so during a time when there are increasing rumors of...things emerging from the uncivilized darkness.

I gave it some thought and came up with a plan. My bank account has grown nicely, so nicely that I was just a few hundred thousand Wulongs from being able to afford a proper exploration ship: the Lakon Spaceways' Asp Scout. While I suspected my trusty Keelback could make the trip, why run the risk? I decided I'd much rather go in a vessel designed for the long haul into the stellar outback. It's extra long range frameshift drive would be worth it alone as it should cut my jumps some.

So, I postponed my trip. Instead, I backtracked a few jumps and found a station that had a Scout in stock: Galilei Port in the HIP 23302 system. Looking around a bit, I found a nice contract worth over 300,000 Wulongs that would give me all I needed to buy that Scout. And all I had to do was disable the electrical grid of a moon base that was at war with my employer, the Purple Mafia. Should be easy.

It was. My target moon was nicely dark for some troublemaking. I set my Keelback down about a kilometer from the target base and deployed my SRV. 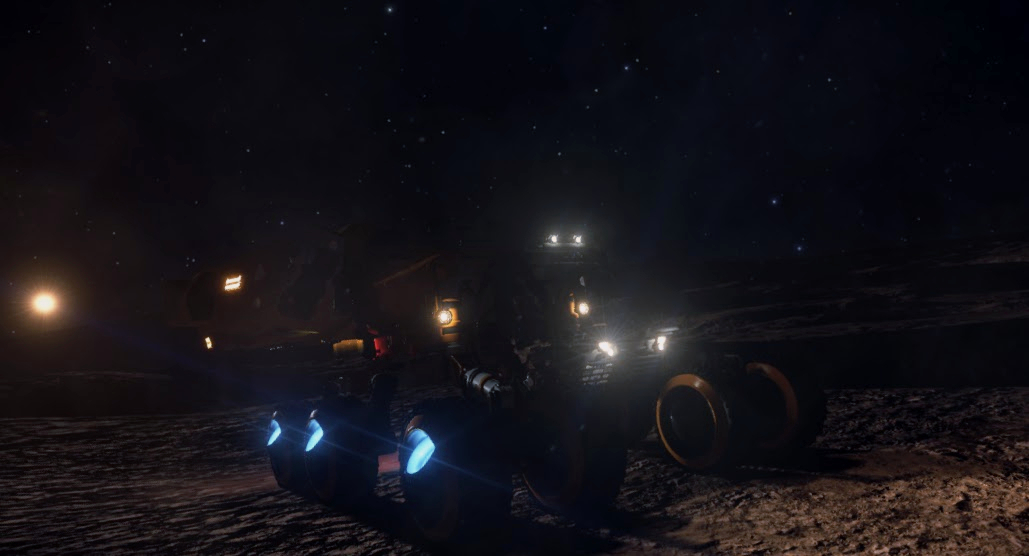 ​
The base had no defenses, so they never knew what hit them. I was on my way back from the diminutive base before they could find a flashlight. 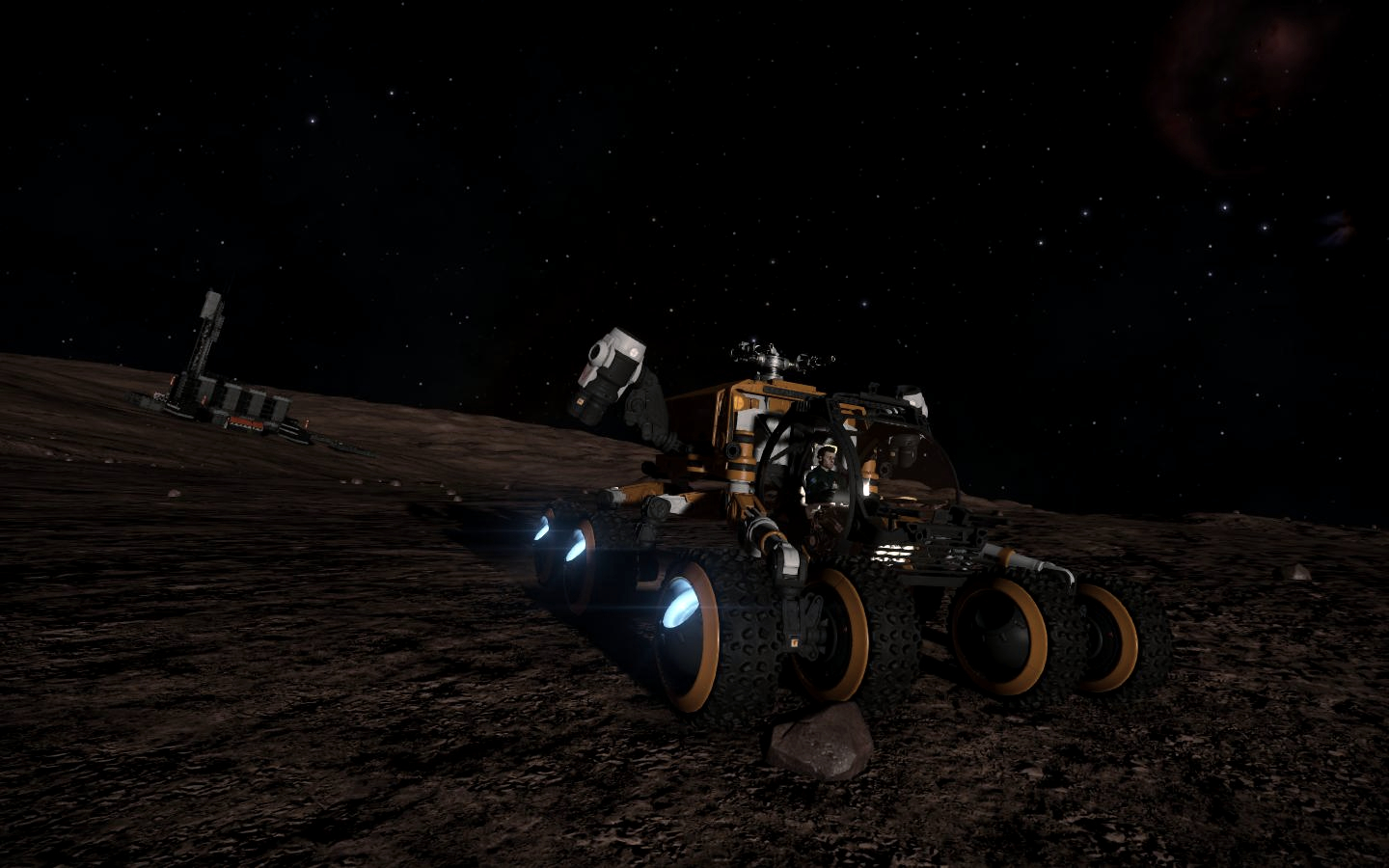 I did pity them, though. Can you imagine what it must be like to suffer a power failure in light(!) of all I have written?

And now I have the extra Wulongs I needed. Time to get that Asp Explorer and start the great voyage. I only hope I know what I am doing. As Col. Kurtz once said, "That's my nightmare: crawling, slithering, along the edge of a straight razor and surviving.”