​
"And now I am good to go?" I asked the Precourt Platform mechanic who ran the upgrades shop. I think his name was Earl, but I wasn't sure. Just as well as I would have cursed it had I been positive.

"Oh, sure, yah new mining laser is good to go. Works fine. Tested it myself," he replied. But I knew there was a catch as that damnably smug smile of his never left his craggy, gray-bearded face.

"...'Course, there is no point having such a piece if you have nowhere to drop the ore you mine." He paused to hook his thumbs on the pockets of his grimy, red coveralls. "Then you need something to collect the ore. You don't wanna be chasin' that stuff yourself. No, don't want that. Madness lies there." Again, with that damnable grin of his.

I felt a deep tiredness suffuse through my body. This was supposed to be a quick mining gig but was quickly turning into a waking nightmare of escalating costs. The mission seemed so easy on the jobs board:

​
How hard could getting 12 units of that stuff be? Just slap a mining laser on my ship and good to go, right? Wrong. Very, very wrong, as Earl of the greasy coveralls was educating me. I just knew he was laughing at me inwardly - well, inwardly and right in front of me - knowing he was dealing with just another mining greenhorn that got in over his head looking to strike it rich. With an embarrased snarl, I told him to just get it done.

Tens of thousands of credits later andGildawas finally kitted out and ready to go. But where? Where do I find Bromamalidine...or whatever that stuff was called? There probably was a lot of the stuff to go around, right? I mean, just a dozen units being requested would suggest a minor shortage in the supply closet. Right?

I did some research and discovered Brystalite was found in icy rings. With that in mind I called up my nav display and plotted a course to the nearest such ring, Guei 11, located conveniently next door:

​
I was the proverbial "eager beaver" as I lifted off, thrilled to be beginning my first foray into the strike-it-rich word of mining. As Guei 11 came into view, I counted the seconds until I could drop out of supercruise and begin collecting my acorns. 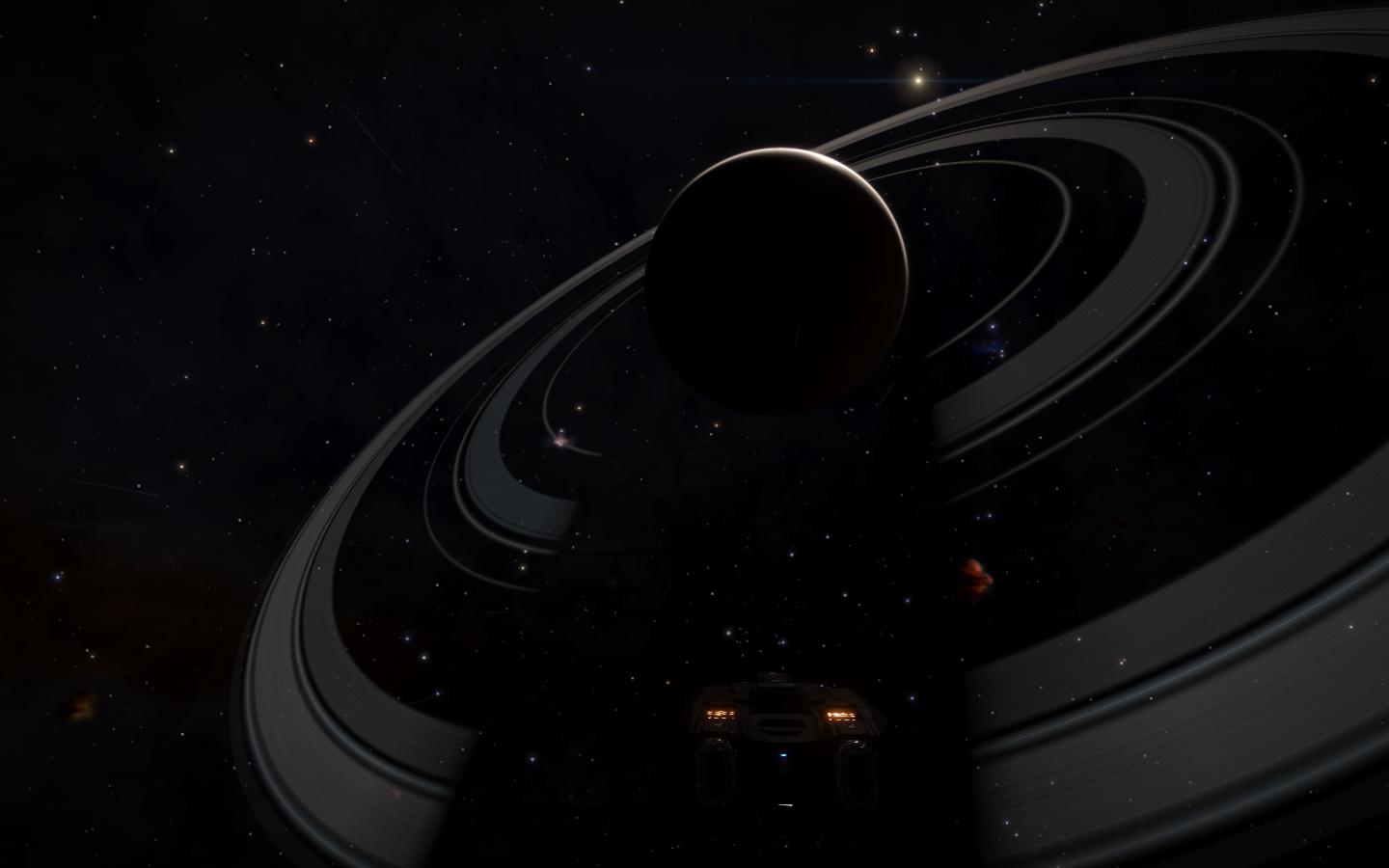 ​
Gilda dropped from supercruise into a vast field of ice chunks that "walked in beauty like the night of cloudless climes and starry skies." Or something. It took a few minutes of fumbling with my flightstick settings to get my new toys working, but I eventually figured it out. Nothing like learning on the job, right? 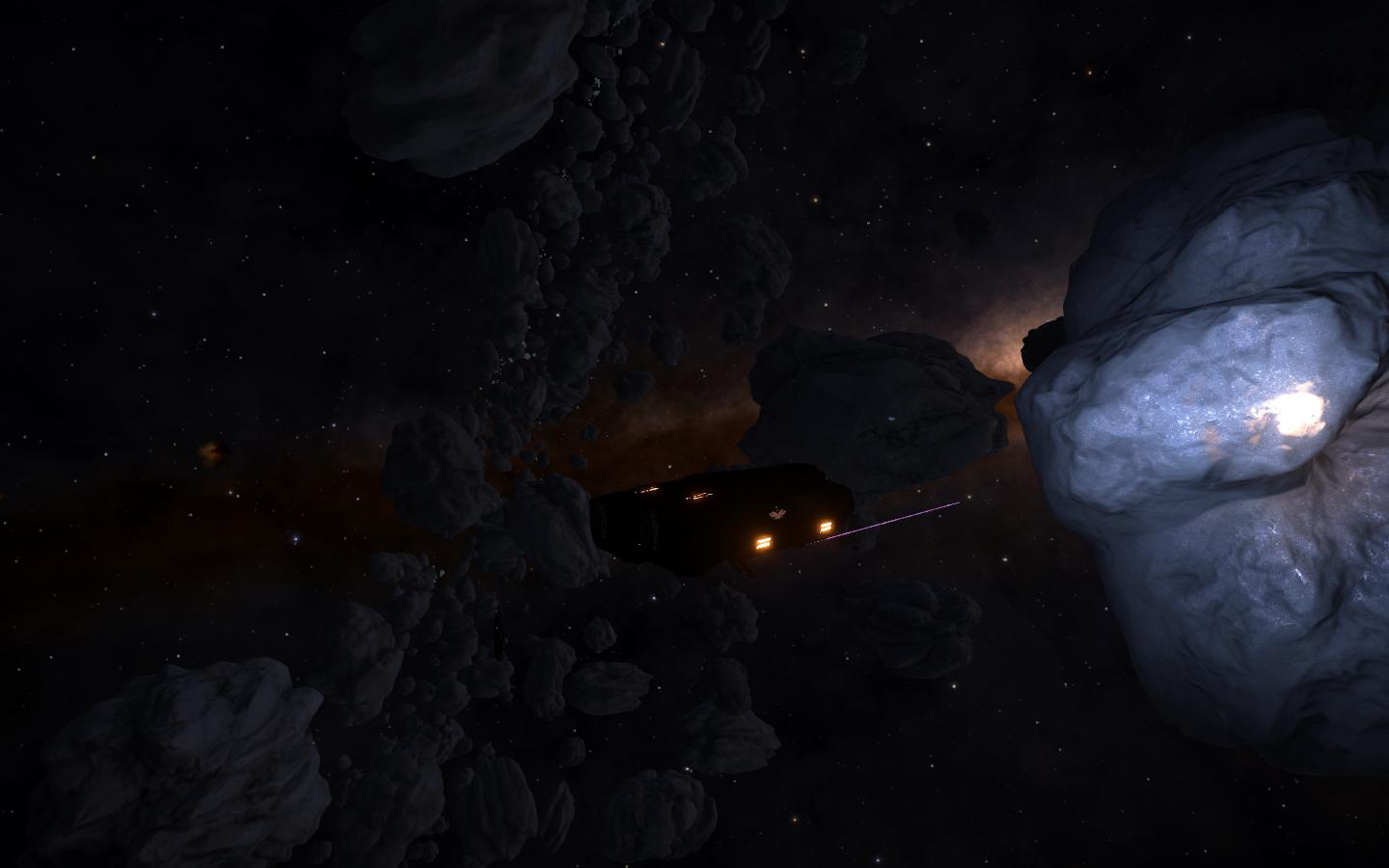 ​
Now, I just had to sit back and watch the money roll in, I thought to myself as I sipped rye from my hip flask and listened to Radio Sidewinder on my internal speakers. Life was good.

Then reality hit me square on the jaw.

This stuff I was looking for, this bromidetite, was nowhere to be found. Ice cube after ice cube, all I was getting was every other imaginable compound ever spawned by the laws of nature and nature's god. Where was the easy money?

This was annoying. VERY annoying. With all that equipment I had shoehorned into Gilda, wasn't there a single piece that pointed out where the good deposits were? Did I really need to just keep blasting chunks off of random 'bergs in the hope of getting lucky?!

I persisted. I admit it was still a bit relaxing watching the limpets doing their work in this dark field. It was also a bit creepy being out there alone with Old Man Black. 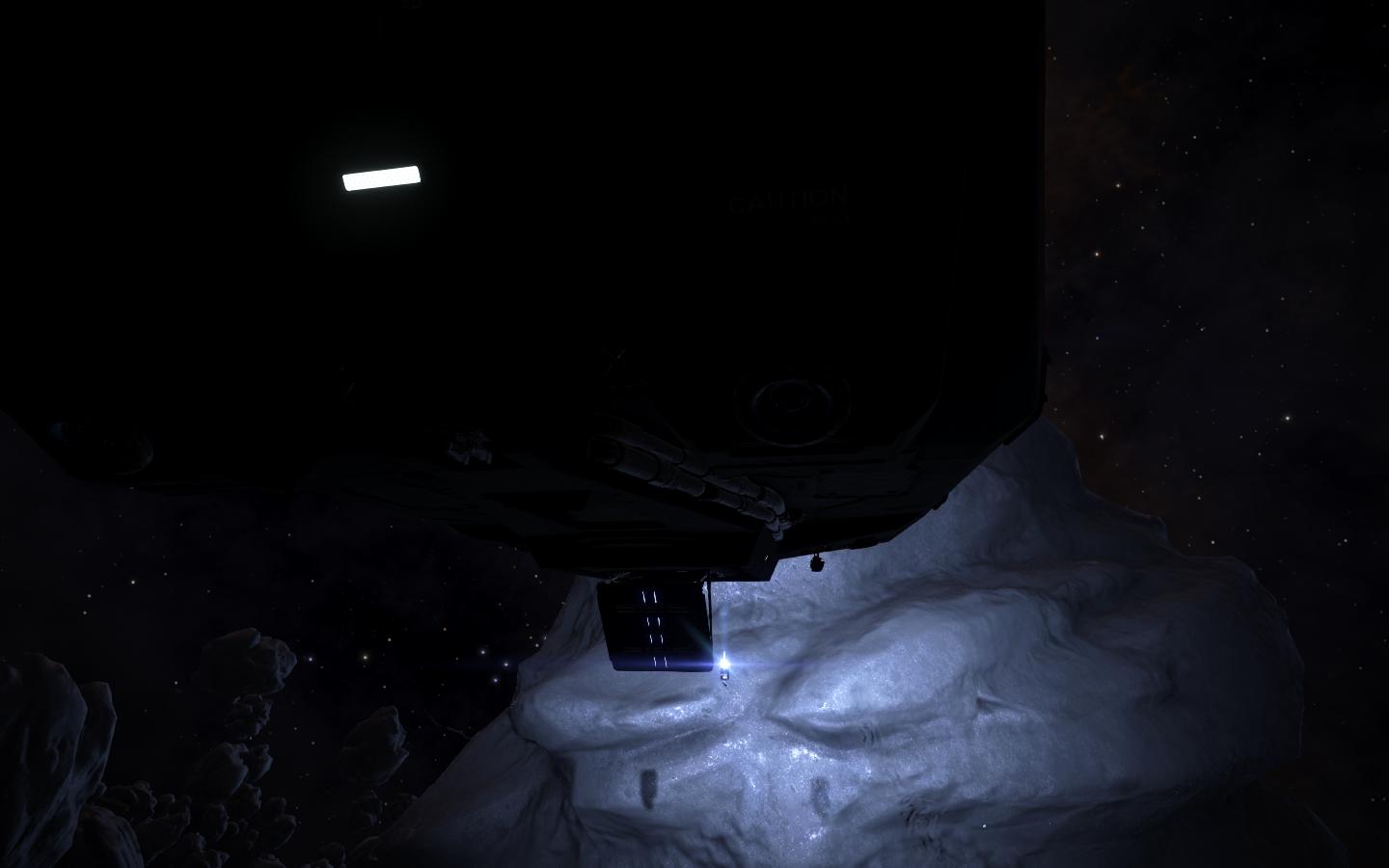 ​
Minutes passed into hours and hours into days. Well, maybe not days. It certainly felt like days, though. At some point I nodded off thinking about piles of gold getting bigger and bigger and bigger. Maybe it was piles of Bromellite.

When I had awakened, my hold held four units. FOUR UNITS! I was ready to put my fist through the deck when my comms chirped with an incoming message. Way out here? I thought to myself.

​
It is funny that no matter how hard I try to get out of the "Planet Express" business, they keep dragging me back in. Normally, I would reject such an unsolicited job offer out of hand as the payoff for these "dark runs" is usually little more than pocket change for an unknown amount of danger, but this time I eagerly accepted it as I felt slowly myself going mad watching the limpets do their work with virtually nothing to show for it. I was starting to understand why there was a six day window for this mining run.

I accepted the mission and headed to Haraka.

Upon arriving my contact immediately hailed me to follow him. But here's the thing about this glorious age of space travel that we live in: it is a big mystery as to which ship on your sensor display is doing the hailing because the transmitting ship isn't tagged. Weird, no? So, with a dozen or so ships milling about the central star, I had no idea who my contact was. Already being frustrated by my torturous mining experience, I threw up my hands and headed to the nearest ice ring in this system, leaving Mr. Auckland to find me again. If his mission was important I trusted he would.

Sure enough,as I approached the hopefully resource-rich ring of Haraka 2, Mr. Aukland hailed me again:

​
I followed his wake. I admit to feeling somewhat exposed in my flying cargo container as I knew this could be a trap. For an uncomfortable moment we hung in orbit glaring at each other. 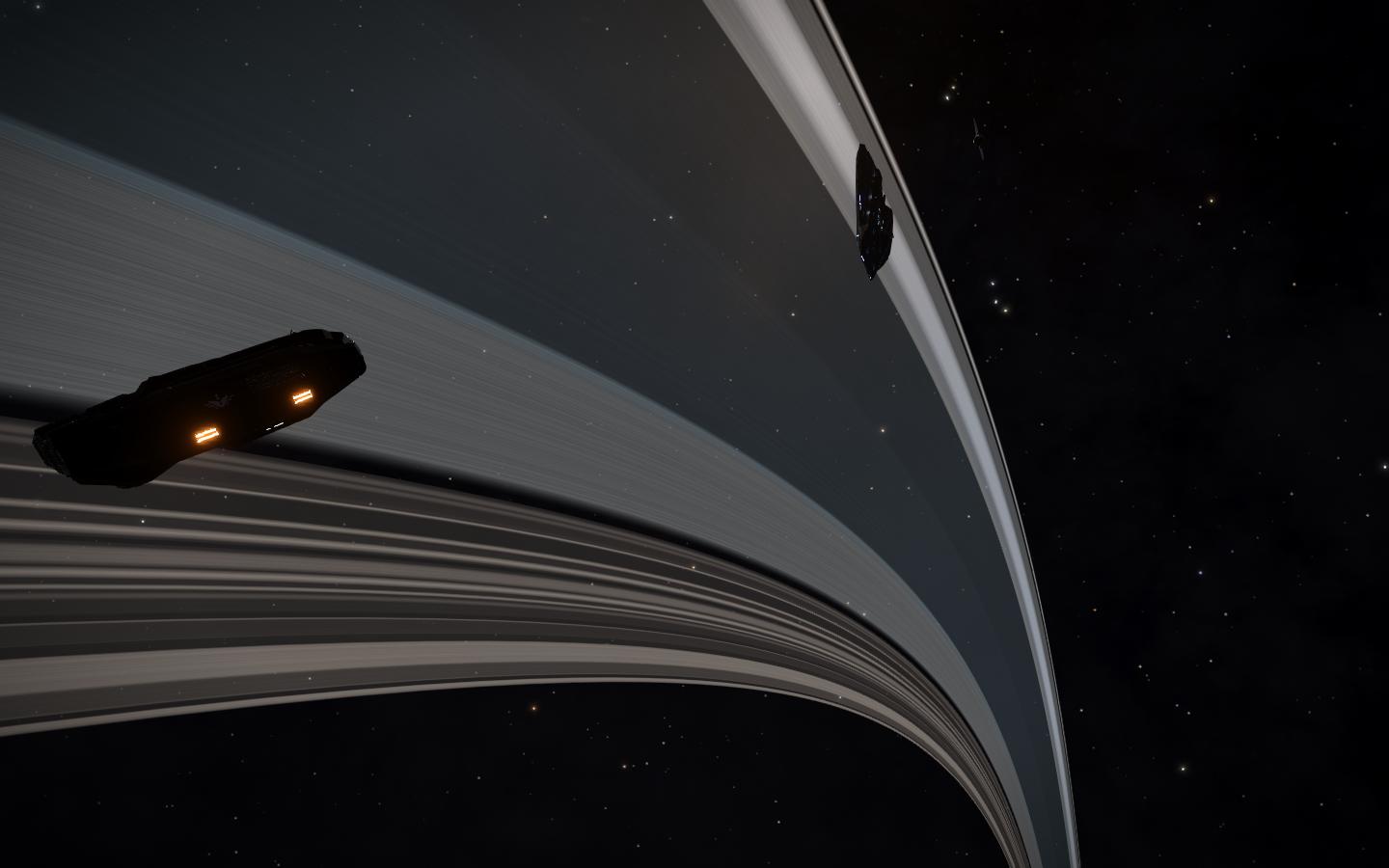 ​
Then he transmitted the data and sent me on my way.

With a tip of my hat, I set course to the backwater post known as Pawelczyk City.

​
All by its lonesome. Not surprised. It is the nature of these dark runs.

I ultimately had no cause for complaining. It was a quick and easy mission. Prospect Jasper Michael gave me my payment without issue. Deal done.

​
Truth be told, I was grateful for the break from mining. But now that my job done, it was time to go back to the ice grinder. Checking my nav system I saw that the nearest system to Pawelczyk City with a minable ice was the Bero system. Off I went.

Upon arriving at the gas giant I saw that there was a high resource extraction sight available for plundering. 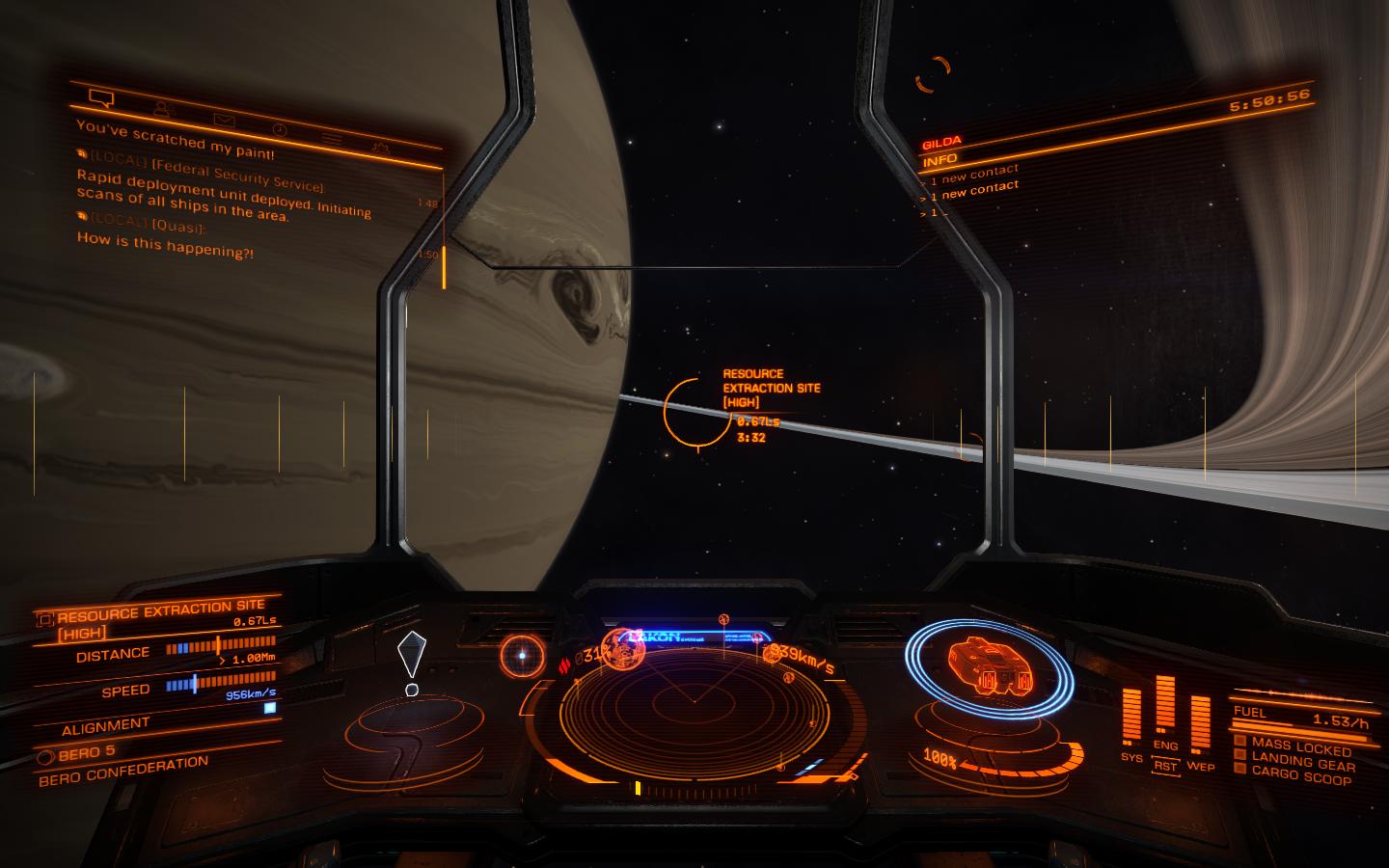 ​
I had heard such mining sites were risky, but more importantly I had heard that the payout in minerals was also much greater than less risky fields. The higher yields brought more miners, more miners brought more pirates. Was it worth the risk? Hell yeah! Anything to make this go quicker.

I exited supercruise and was greeted with a breathtaking sight: 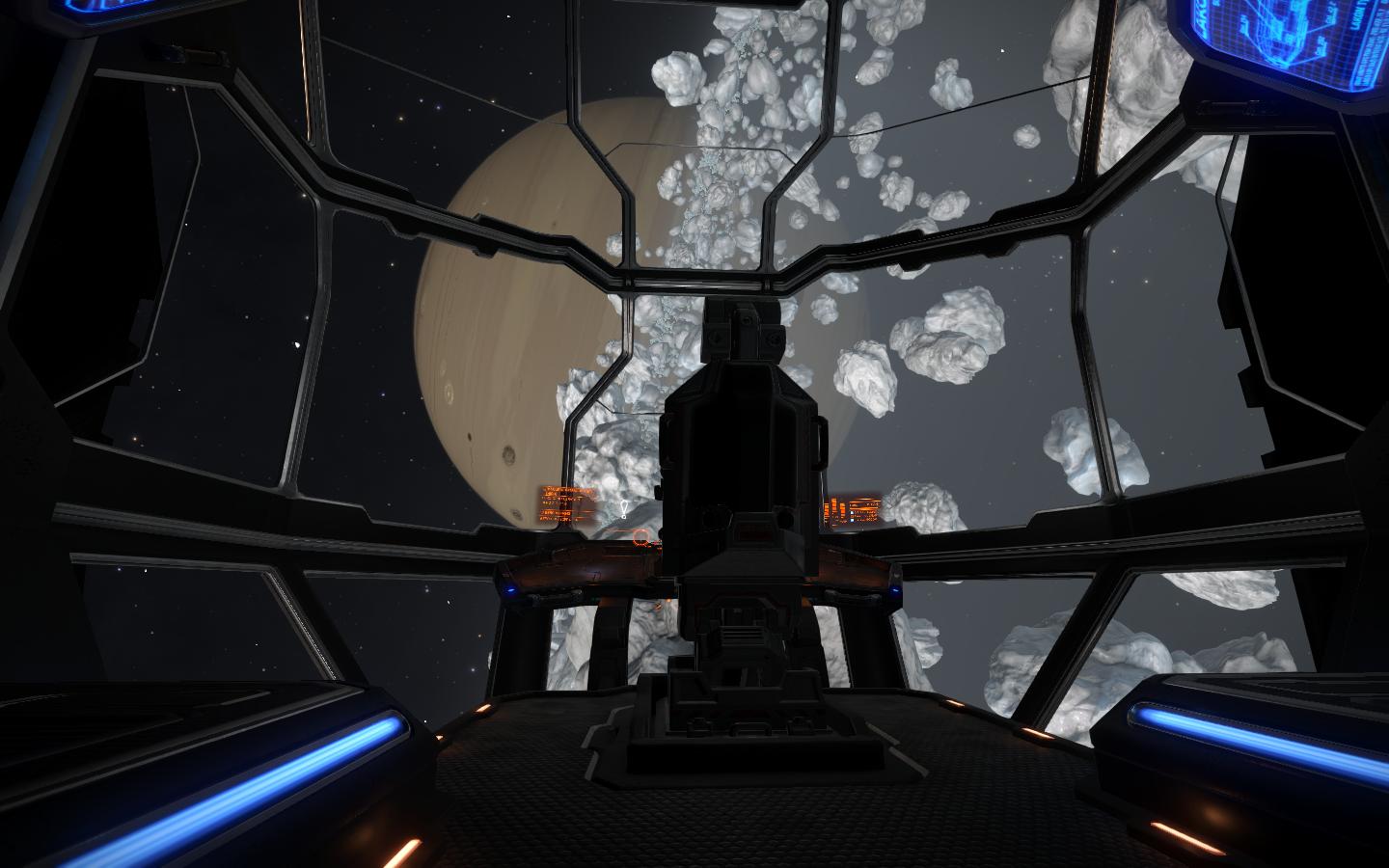 ​
Gorgeous. So that's what it looked like to mine in daylight.

I got back to my routine of mining and collecting, while listening to the news on Radio Sidewinder. Weird stuff going on in the Bubble these days. I blame the progressives. 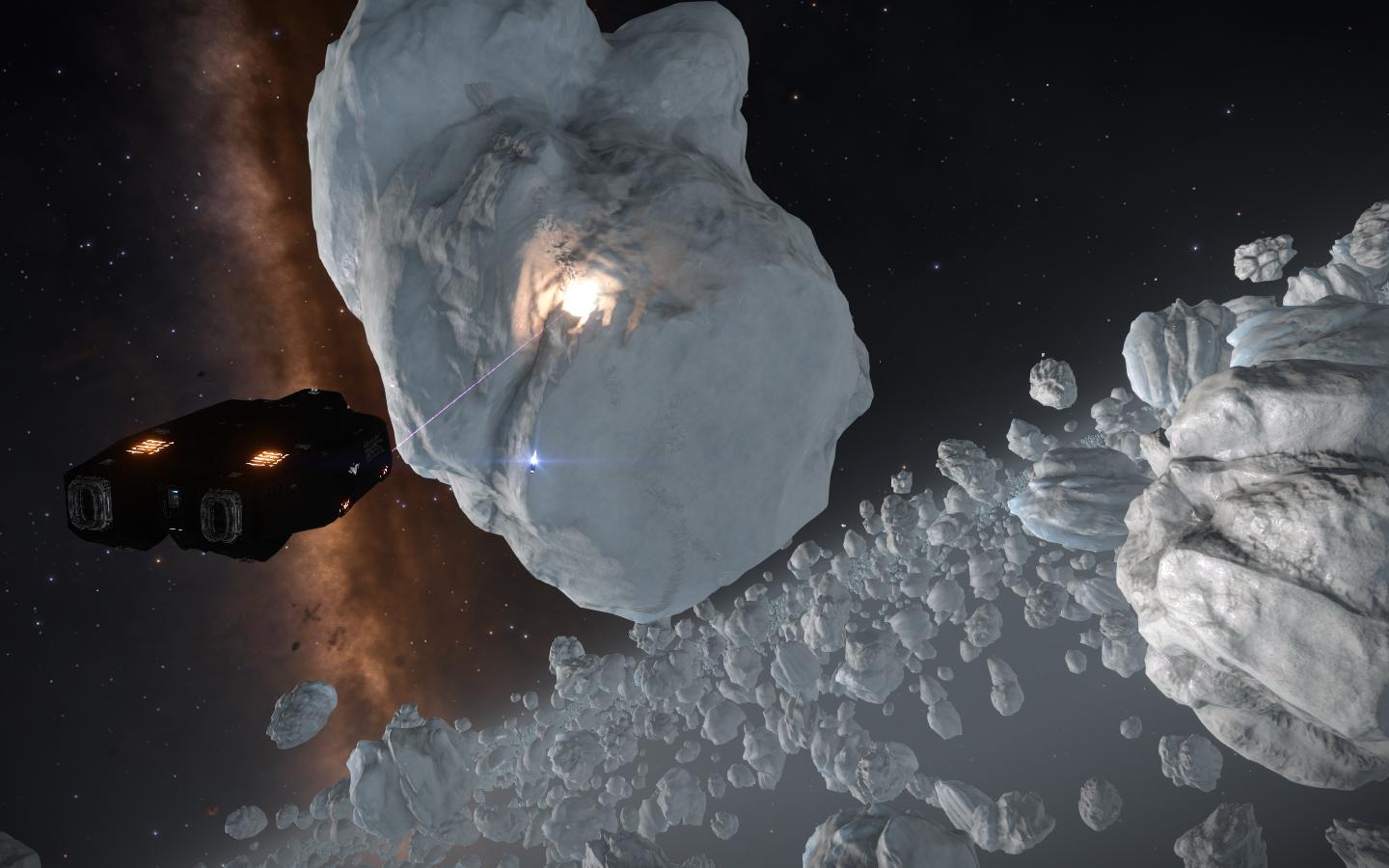 ​
It was as slow as molasses cooled to absolute zero, but I was making headway at long last. In about an hour, I had mined seven out of the twelve bars I needed. Things were going great...until my comms came alive with a message from a pirate threatening me to drop my hard-earned Bricklebrit. Where did he come from?! Guess I should have been paying more attention to my sensor readings and less to my hip flask. Naturally, I refused the request and started to close up shop and boost out of there, but unfortunately for me his ship outclassed my Gilda. Before I knew it, he had sundered my shields and holed my hull. I don't recall much besides the eject warning.

I awoke some days later in a station medbay, bruised and spitting mad. All that work gone. A trip for biscuits. Nothing to show for it.

It took a few days for the insurance to pay out and for the shipyard to fabricate a new Gilda, so I had time to think about my first foray into the world of mining. First lesson: AVOID HIGH RES! The way that pirate took me apart in mere seconds made that quite clear, thank you very much. Second lesson: focus on the target mineral. In retrospect, I realized that I wasted a lot of time mining asteroids that didn't have the Bromellite I was looking for. Yeah, those minerals would have added some nice scratch to the till, but it also slowed me down considerably. Going forward, I needed to strictly focus on my mission goal. If the first sample chunk didn't contain any traces of Brunhildeite, move on to the next ice field. Lastly, KEEP YOUR EYES GLUED TO YOUR SENSORS. Trouble can come out of nowhere and you need to be prepared to fight or flee at all times.

Lessons learned, I was on my way again, this time to the nerdy-sounding system of BD+24 1451, Planet 5. Perhaps I would finally find my motherlode.

My target "icy body" was a pretty as the rest:

​
Unfortunately, I found the pickin's to be slim, so I only hung around a bit, quickly offloaded some lithium hydroxide I refined there, and moved on to the next system: Didarengu 2 Ring B. MUCH better results there, which was surprising because this time I made sure to pick a LOW RES, something I thought would result in lower yields. Apparently not as I started to make real progress rather quickly, especially as I adhered to my new Rules of Mining(TM). 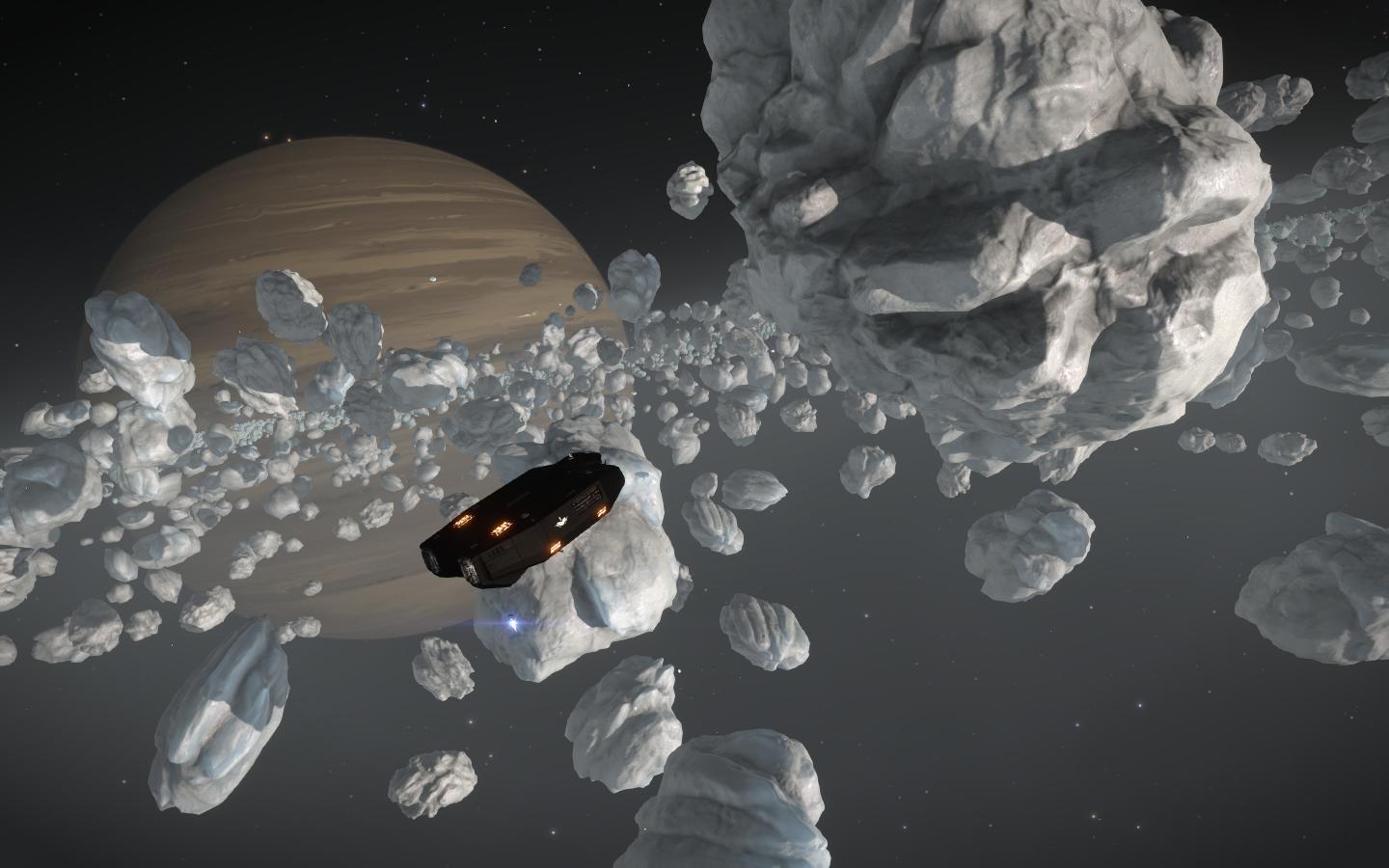 I did get a bit nervous as their were lots of other miners around, including this fella who got a bit close:

​
Fortunately, the police presence was strong and quickly dealt with all troublemakers. Well, I think they were police even if I didn't see any badges.

I looked like I finally found my knack for mining. Now I really could sit back and enjoy the sights as I listened to the tunes beamed to me via Radio Sidewinder. This cockpit black box photo doesn't show it, but inwardly I was smiling. 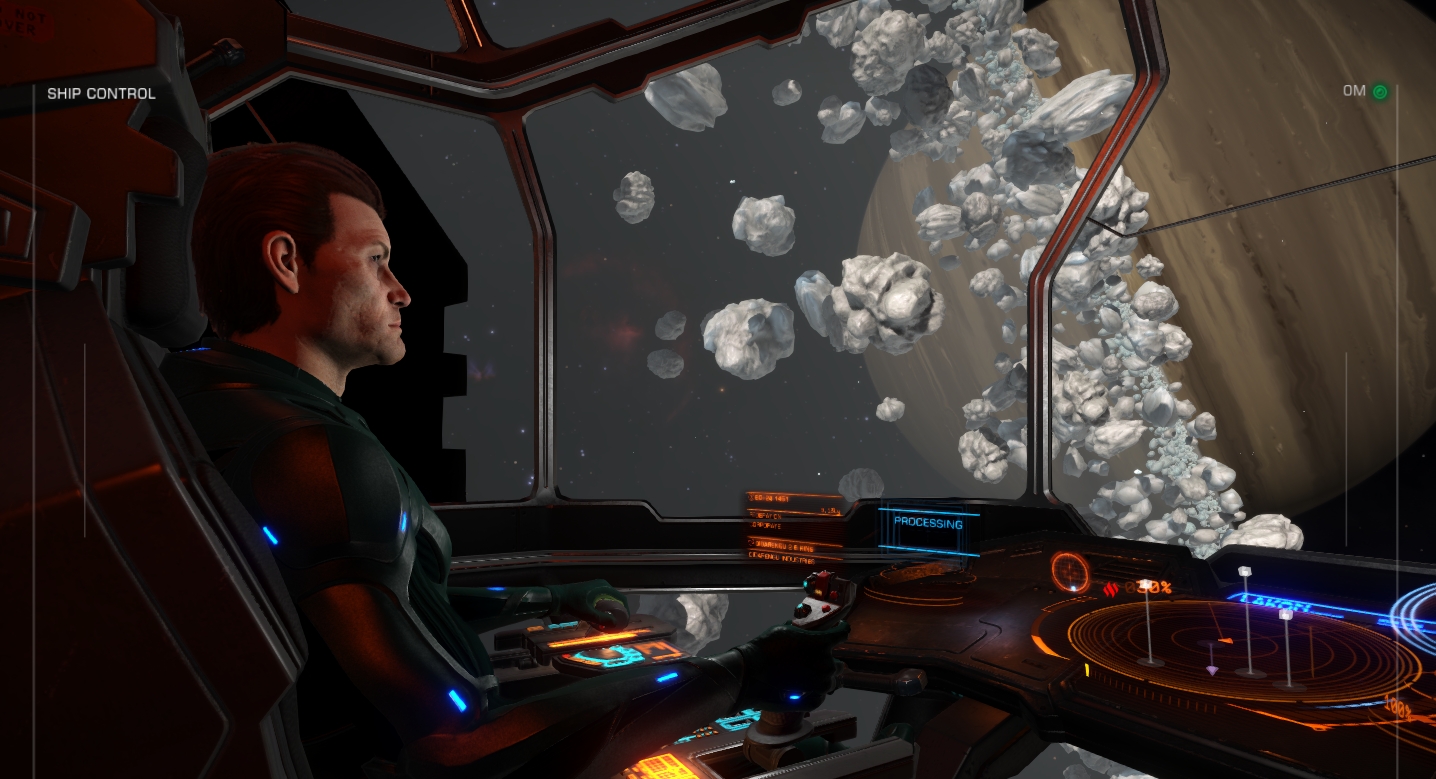 ​
And then it was done! I had my twelve units of Bromellite! Time to get out of here before Murphy's Law extended its claws into the vacuum of space and mercilessly crushed me again.

It was a big relief when I arrived at Mohmand Dock and brought Gilda in for a soft landing. 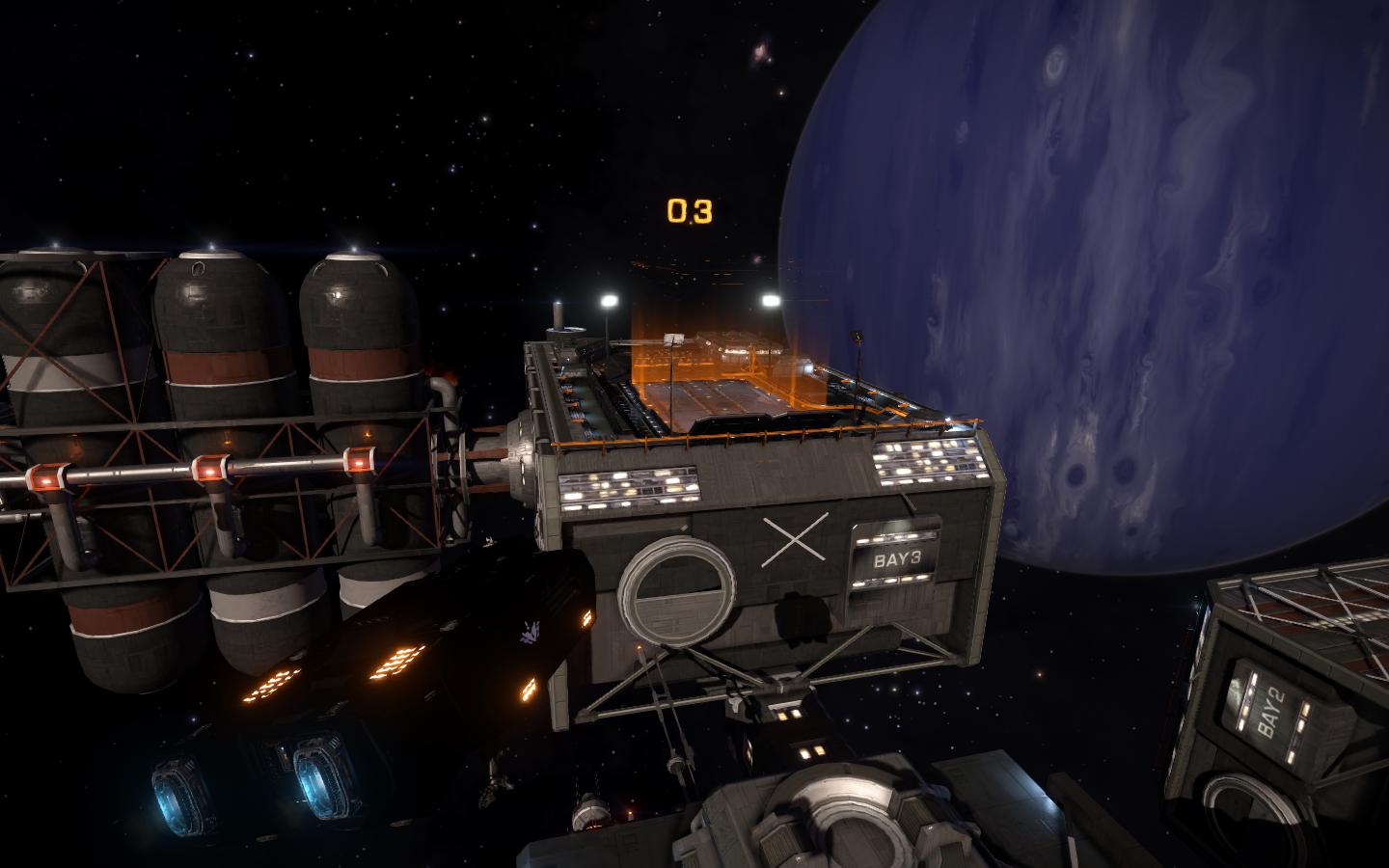 ​
Before my engines even had a chance to cool, I was on my comms confirming delivery of the Bromellite. Now they were Manager Clayton's problem!

This mission had a roughly six day window, of which I had used just over three days. Yeah, that was an unexpectedly tough nut to crack. Worse, I think I lost money on the deal, what with the initial equipment costs, Gilda reconstruction costs not covered by insurance, and other miscellaneous fees. Well, live and learn. It certainly was a change of pace from hauling deliveries around. Having said that...I think I'll stick with the delivery business.
You must log in or register to reply here.
Share:
Facebook Twitter Reddit Pinterest Tumblr WhatsApp Email Link
Top