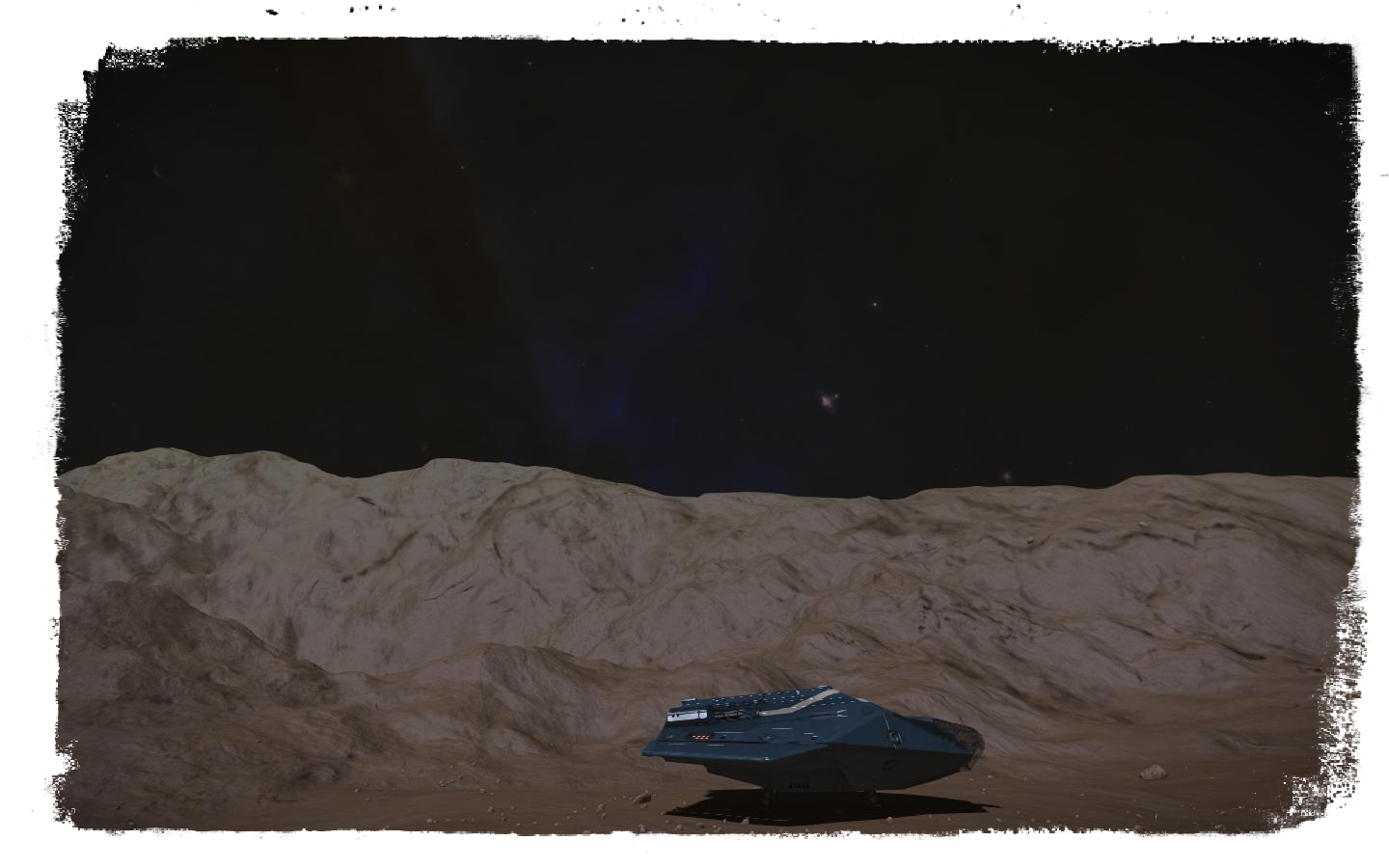 ​
It's been a long trip, but now it was time to harvest what I came for: those elusive meta-alloys.

But where to find them? I knew they were in Merope, but which planet? Time to consult Canonn Research Group to learn all I could about "barnacles" and the meta-alloys they spawn! My research didn't take long - best of all, it made for interesting reading! - and soon I understood these alien things better. What is more, I also ascertained a likely location for my harvesting efforts: Merope 5C. I figured if Sirius Corp. came all the way out here to Merope, I should focus my efforts on the planets in this system as there was probably a high likelihood of finding exactly what I wanted. Merope 5C had three reported sites, so that was my target.

I brought ol' Fitzcarraldo in close to the surface to see what I could see: 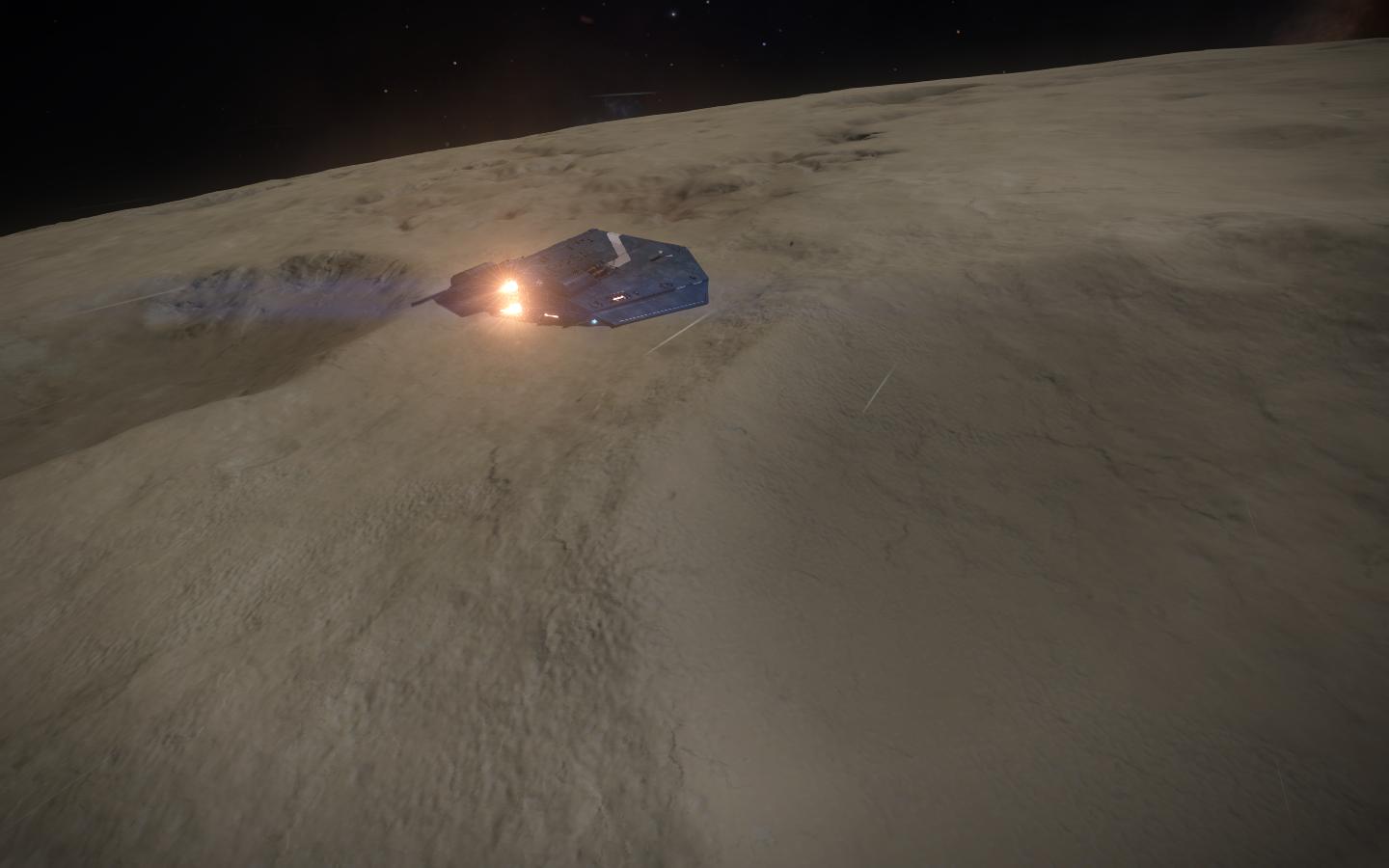 ​
Lots of impact craters and not much else. But I instantly knew I was in the right place when I spotted a Federal Farragut-class Battlecruiser patrolling over one non-descript place on the surface. Time to set down and deploy the SRV!

I confess that the presence of such a massive warship was comforting as I drove around in my lil' fragile rover. 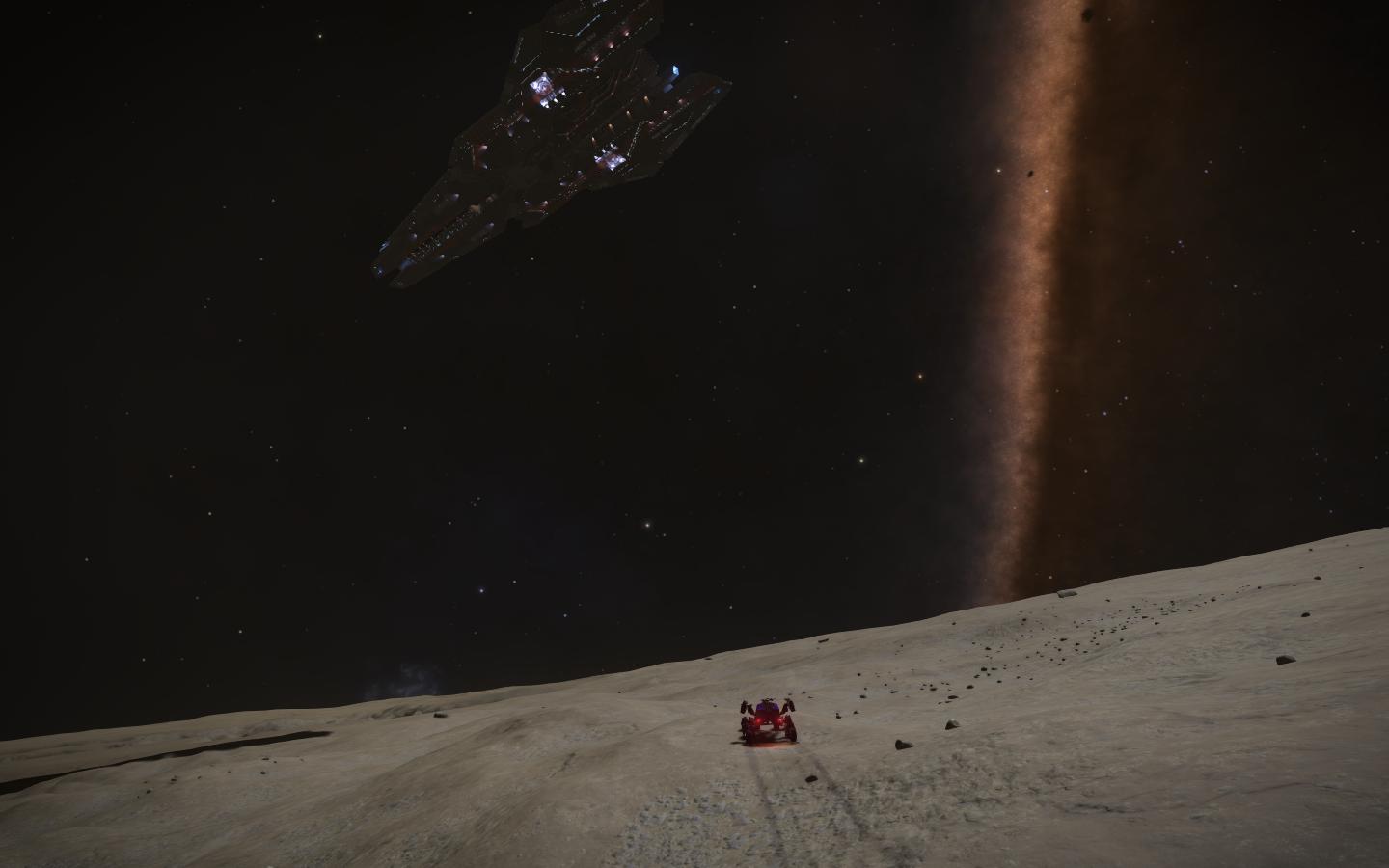 ​
I discovered that it was protecting a valley. Guess I knew where I was going next! 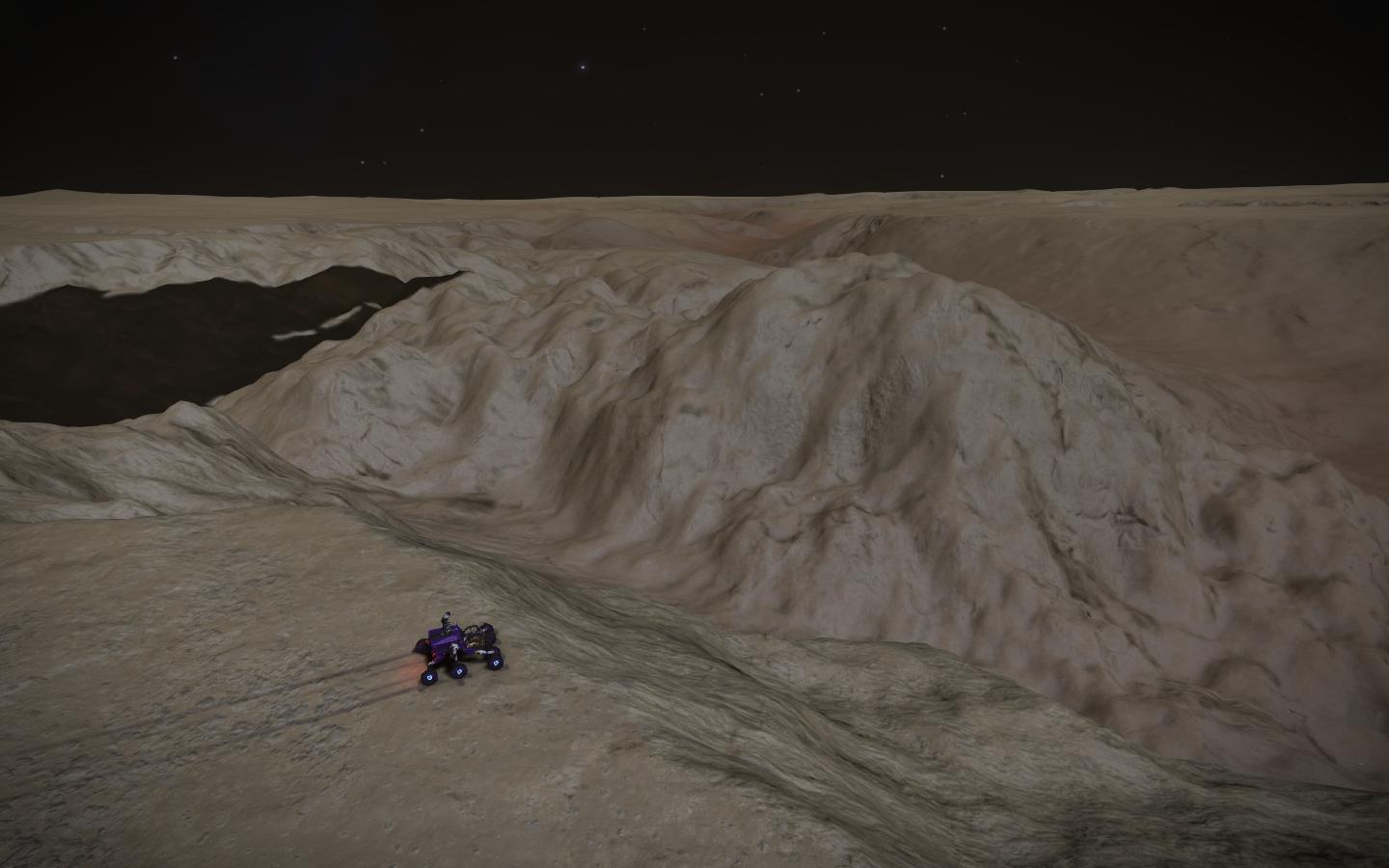 Notice the shadow cast by the battle cruiser! 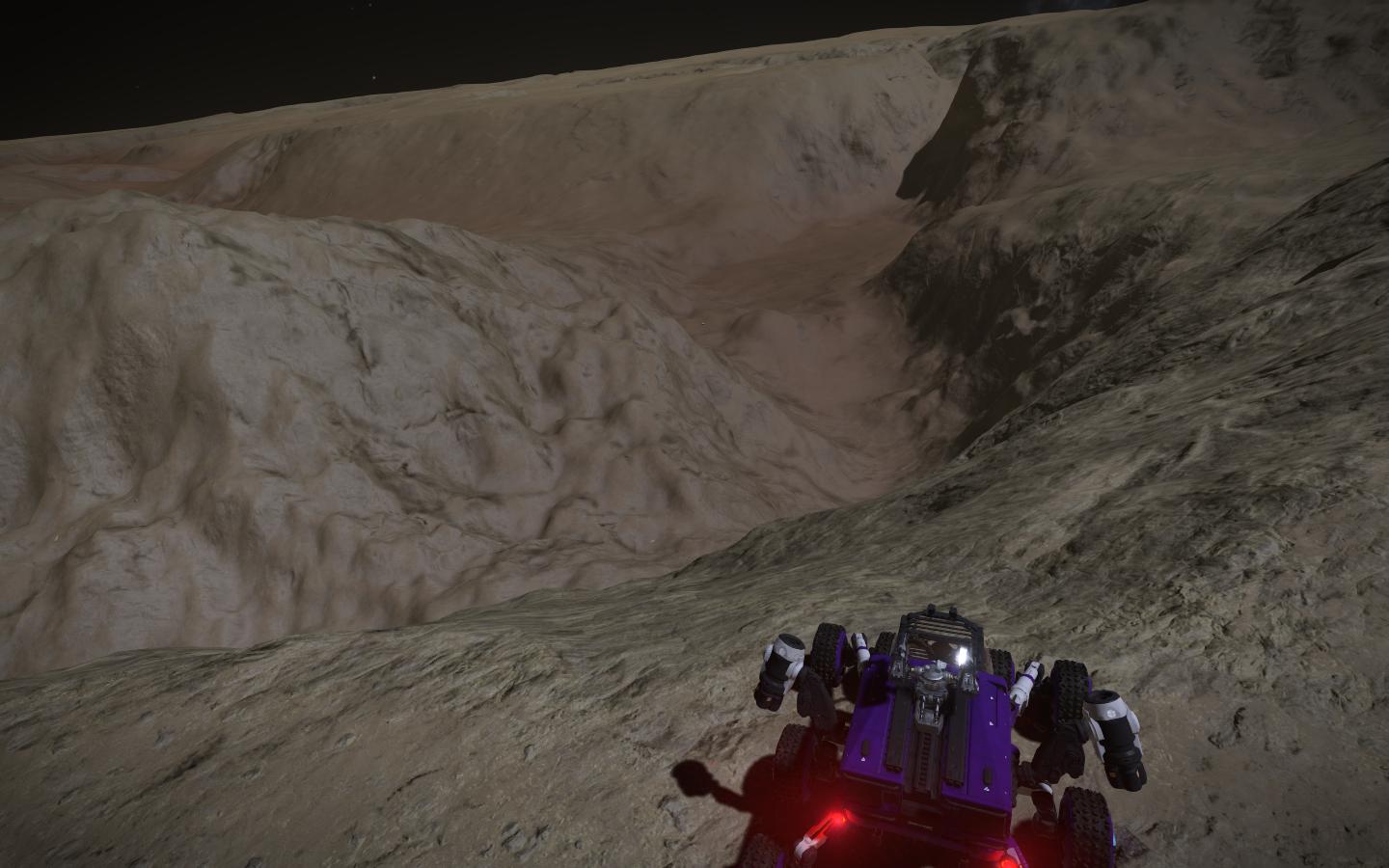 ​
Somewhere down there was my quarry!

The terrain looked too difficult for my SRV to descent on its own, so I motored back to Fitzcarraldo and flew down into the valley. I soon spotted the location that the battlecruiser was guarding. 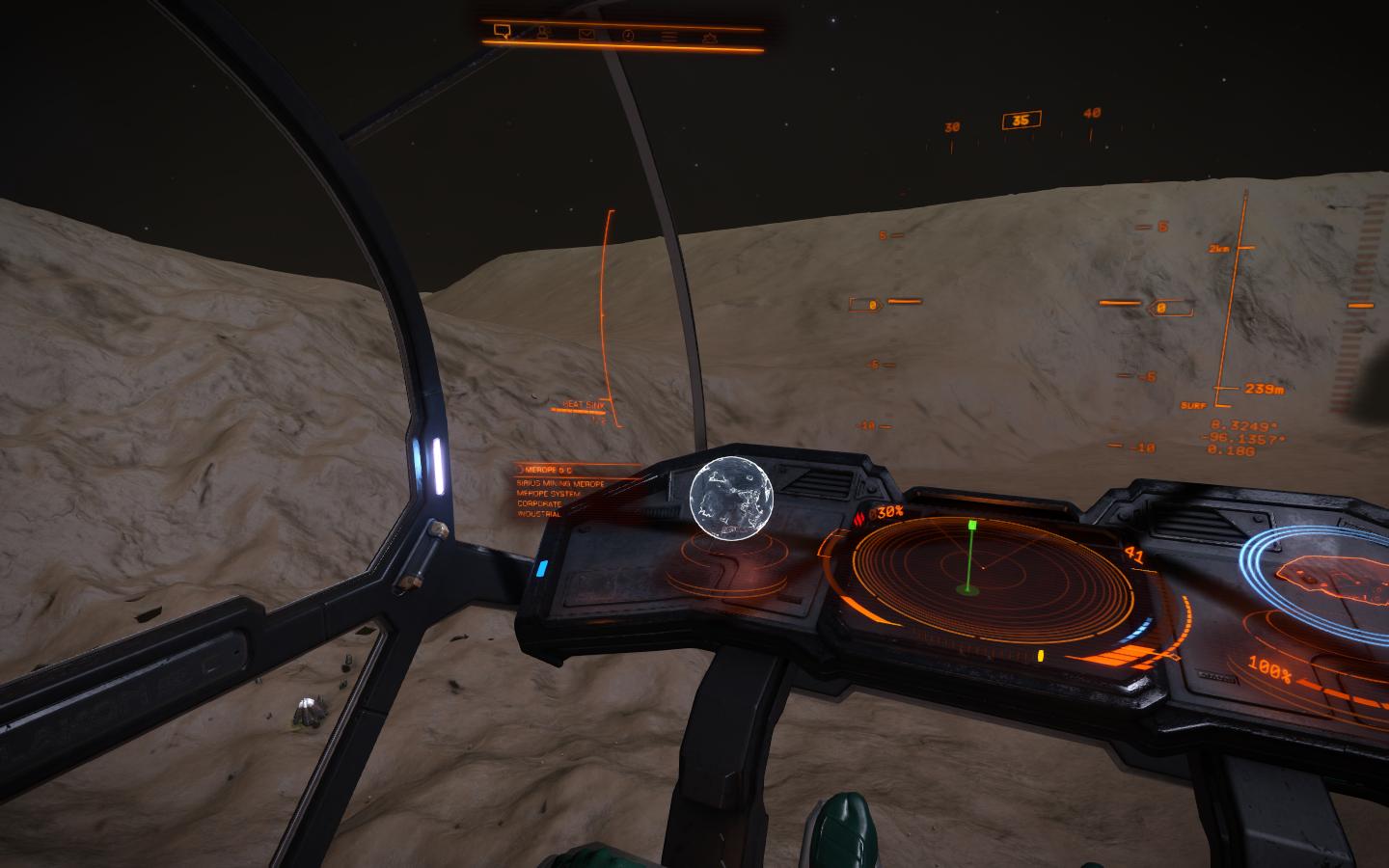 Spotted it through the bottom left of my canopy
​
Time for my close encounter! I landed Fitzcarraldo close by and deployed the SRV again. It took some doing - the intervening terrain was very rough - but I finally closed in on my first batch of alien barnacles. The first indication of something strange nearby was these weird, metallic structures: 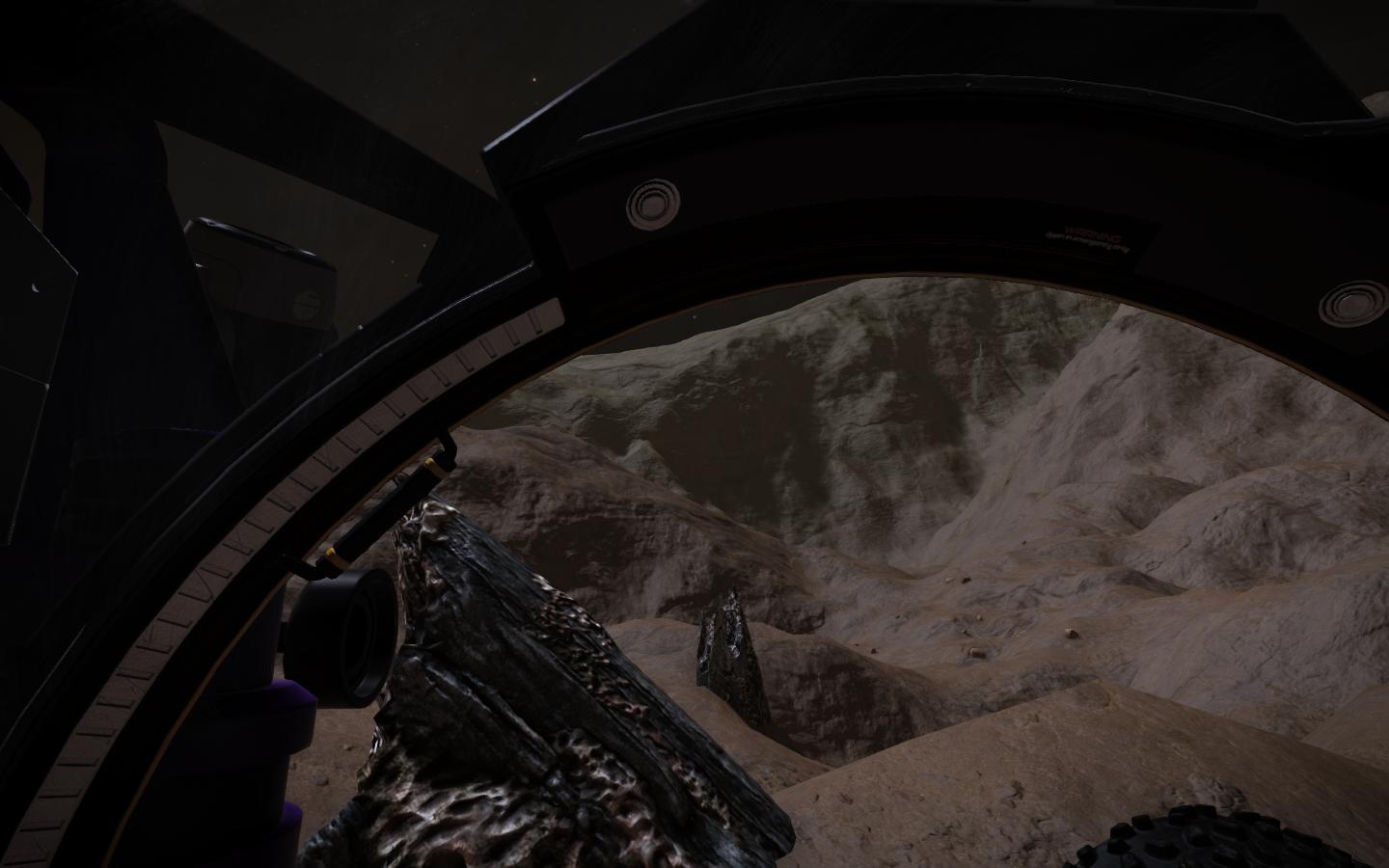 ​
And then I spotted the barnacle itself: 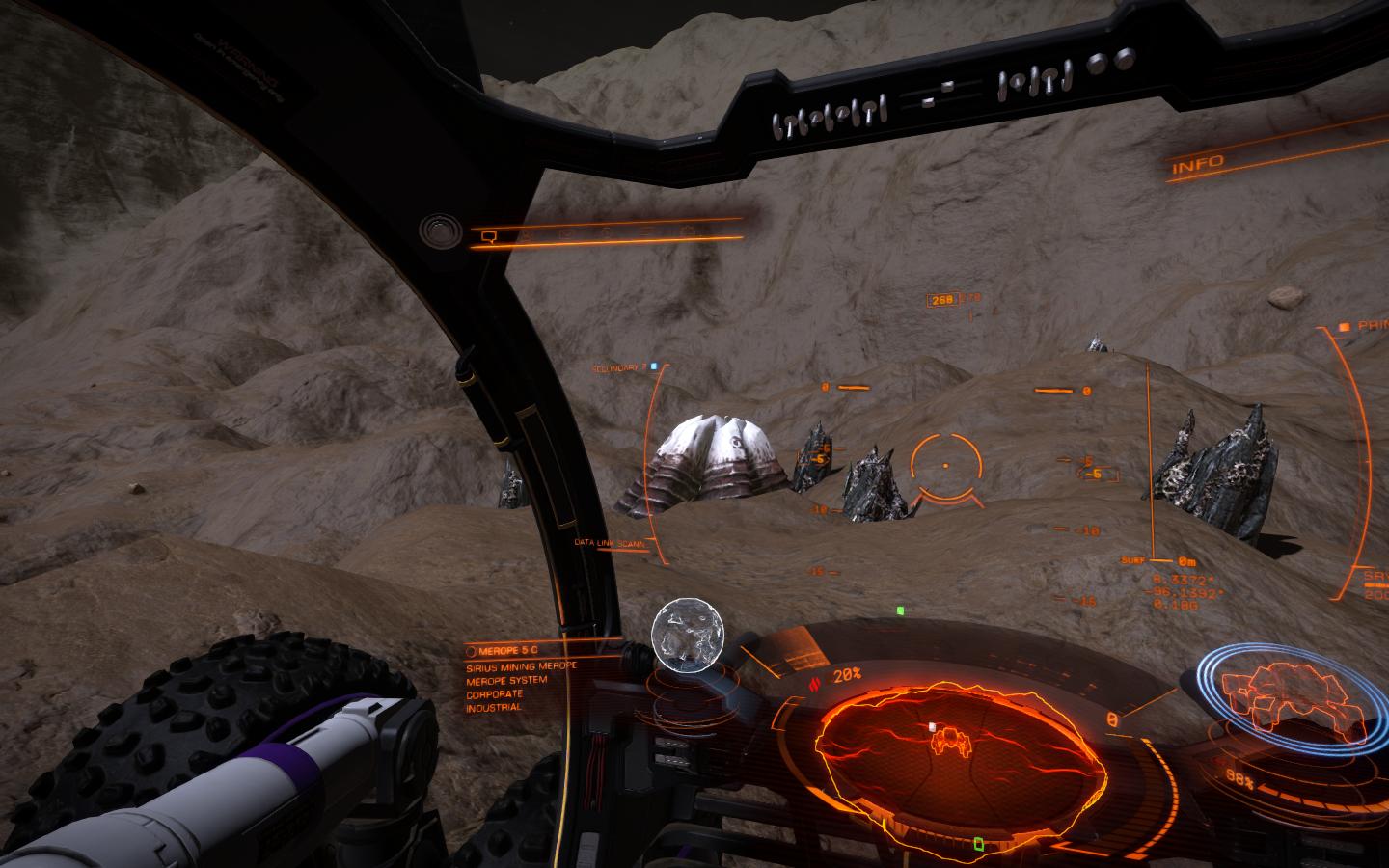 I soon discovered I had a problem. This might be an actual alien barnacle, but there was no meta-alloys to harvest! I blasted away with the SRVs cannon but nothing dropped. Frustrating. I motored around the site, investigating and blasting, but it yielded me zippo for the effort. Eventually, I gave up and left, especially once the battlecruiser lost patience with my prodding and ordered me out of the area. It even deployed a wing of vessels to scare me off! 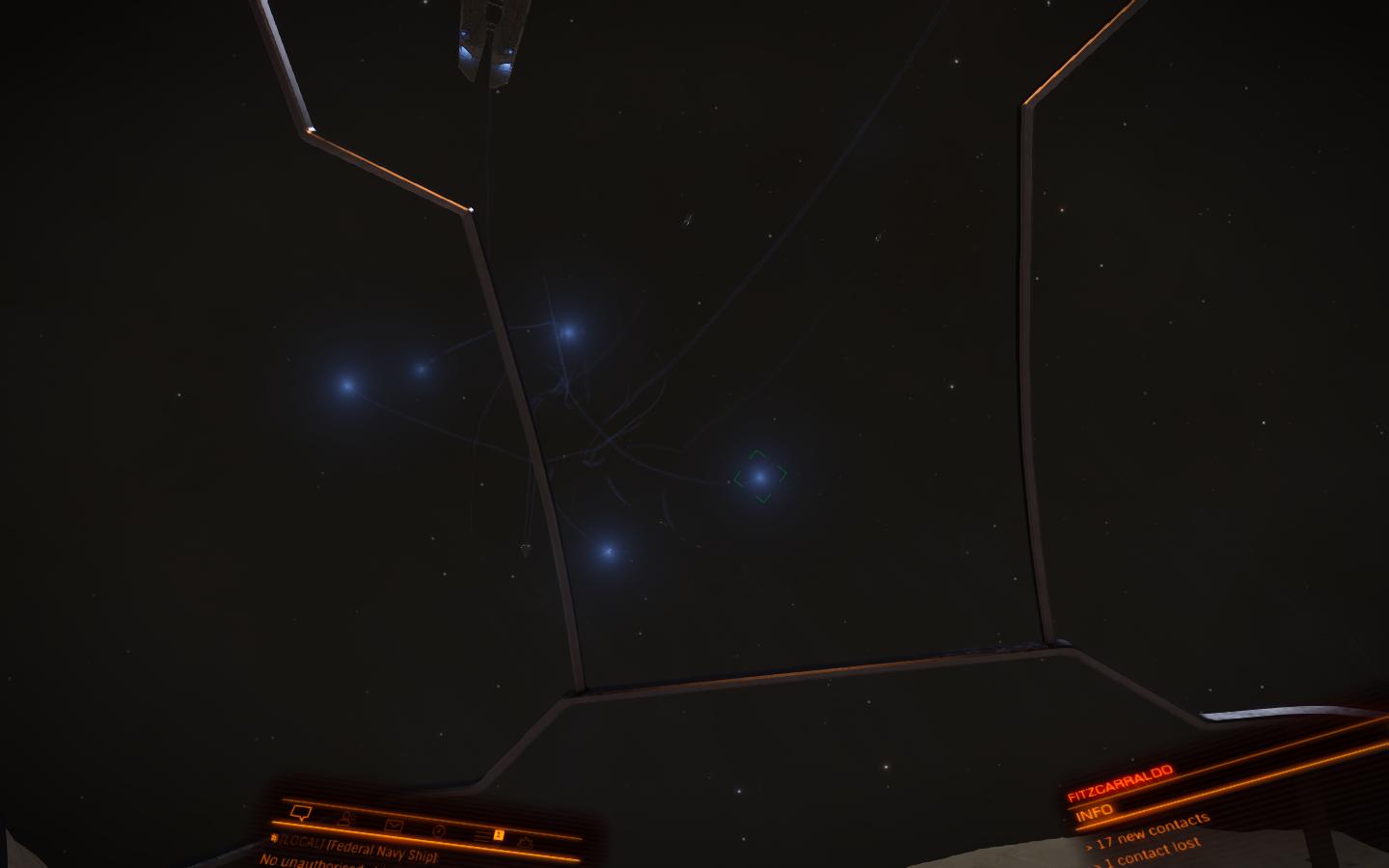 Time to move on, I guess.

But more frustration met me here. I scoured the site from above but found nothing worth investigating, just lots of rugged terrain. 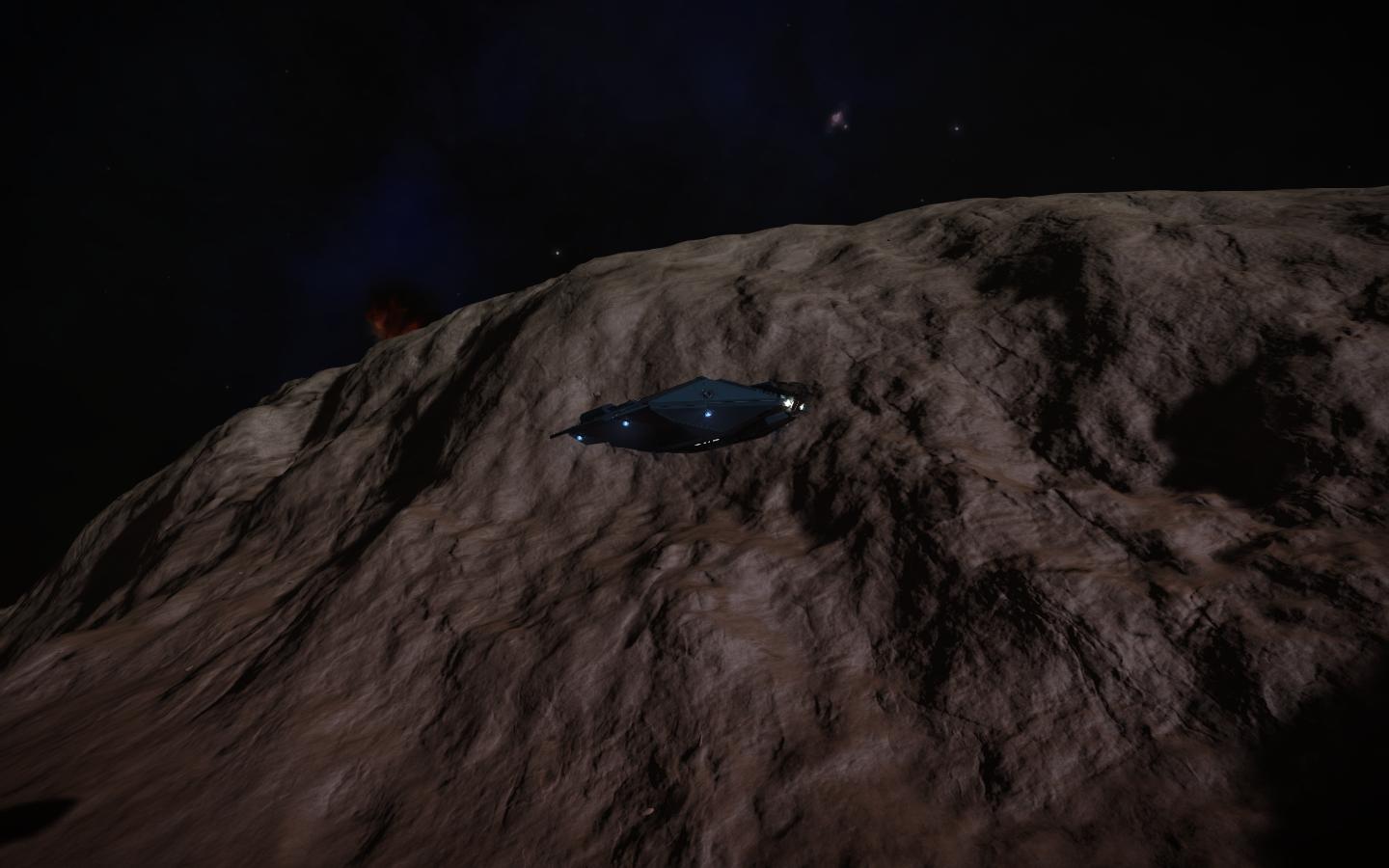 I landed nearby and started exploring with my SRV. Using the wave scanner, I detected an odd, distant signal that seemed promising. Frankly, I knew I had hit paydirt when I discovered that shadowy valley that absolutely gave me the creeps! 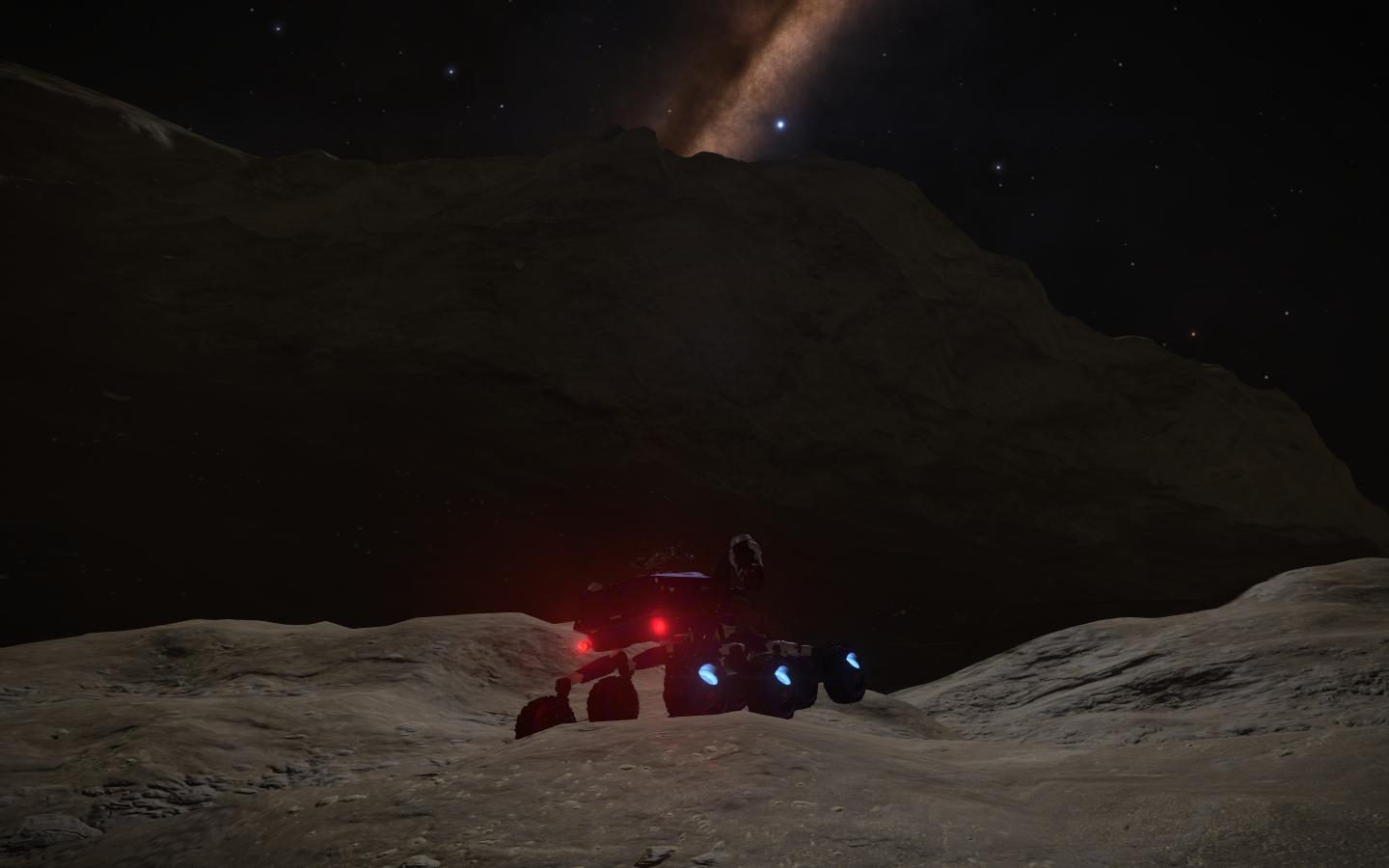 ​
The further in I went, the darker it got. Eventually, I had to employ my highbeams to see anything. After cautiously crawling my way forward, my lights showed me what I wanted to see: 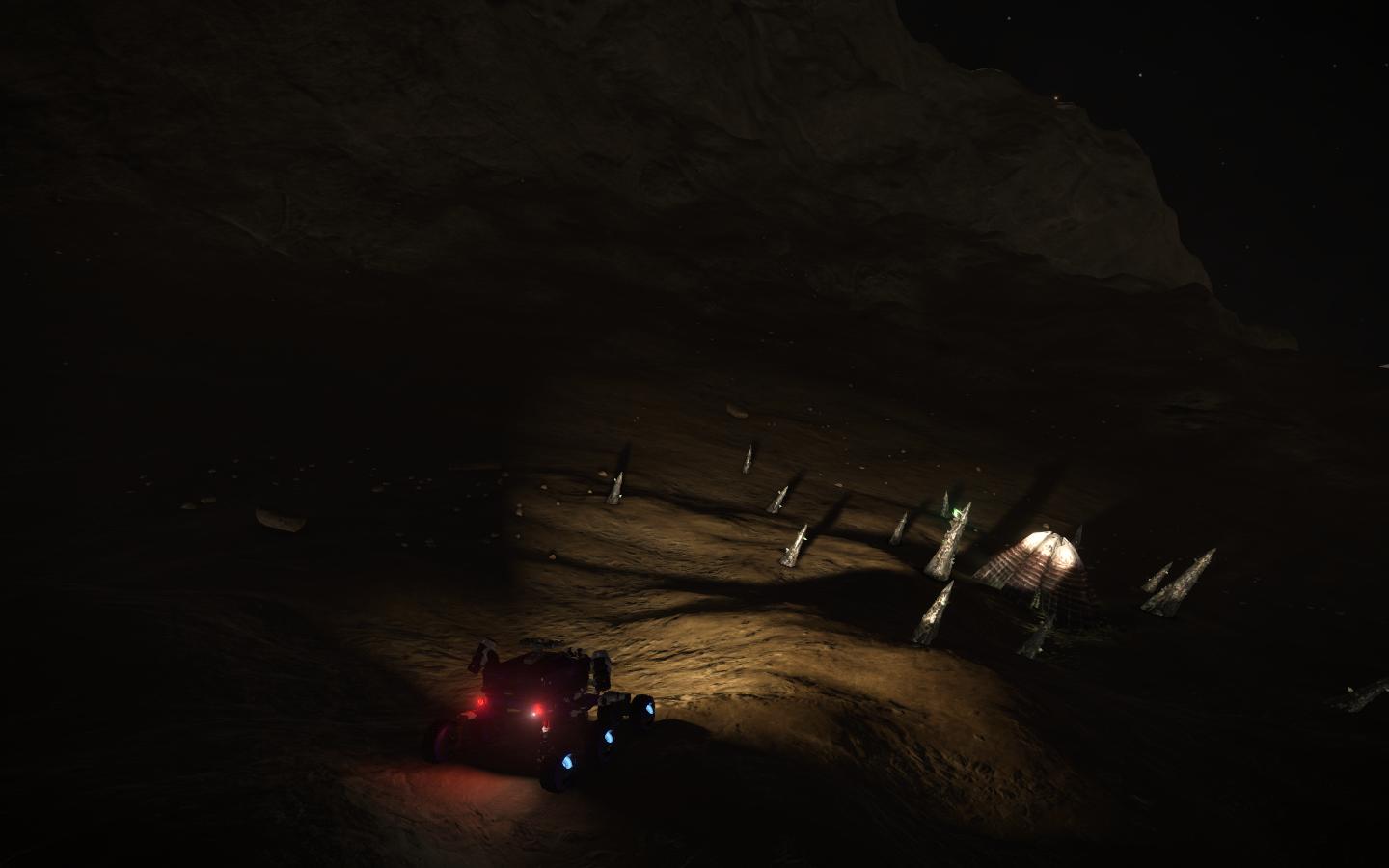 ​
A barnacle site! And unlike the first site, this one had fat, juicy green...things on them. I know something harvestable when I see it! 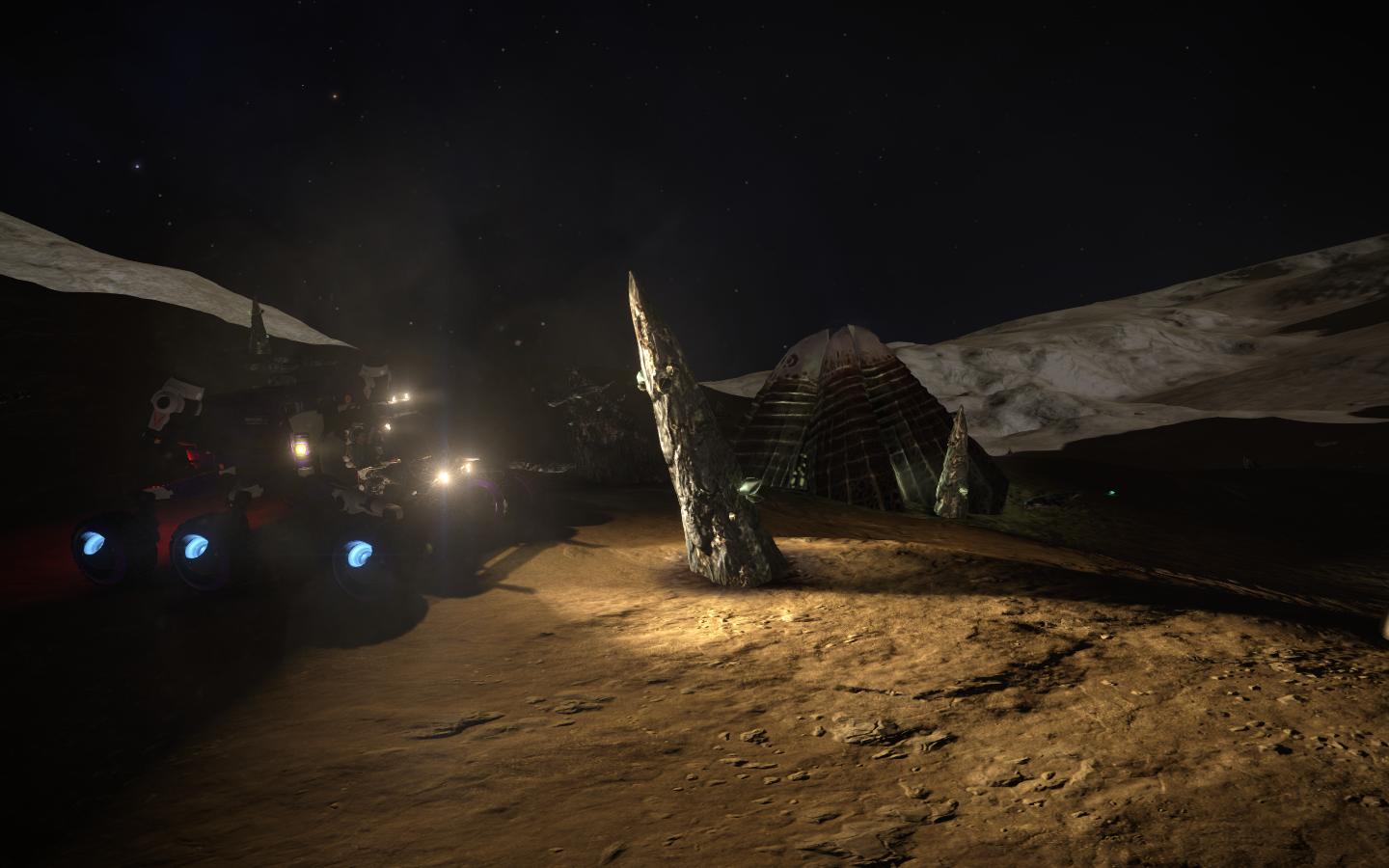 Well, not quite. Again.

It took some trial and error, but I discovered that there are two types of pods that you can harvest: the more plentiful small pods, and the juicer big pods. It's the big ones I wanted as only they have the precious meta-alloys in them. The rest just yield ordinally mineral concentrations. So, it turned out in this big field there were only TWO meta-alloy pods. I just needed one, so good enough. I took the two and got out of that creepy valley. I was glad to leave its shadow behind me. 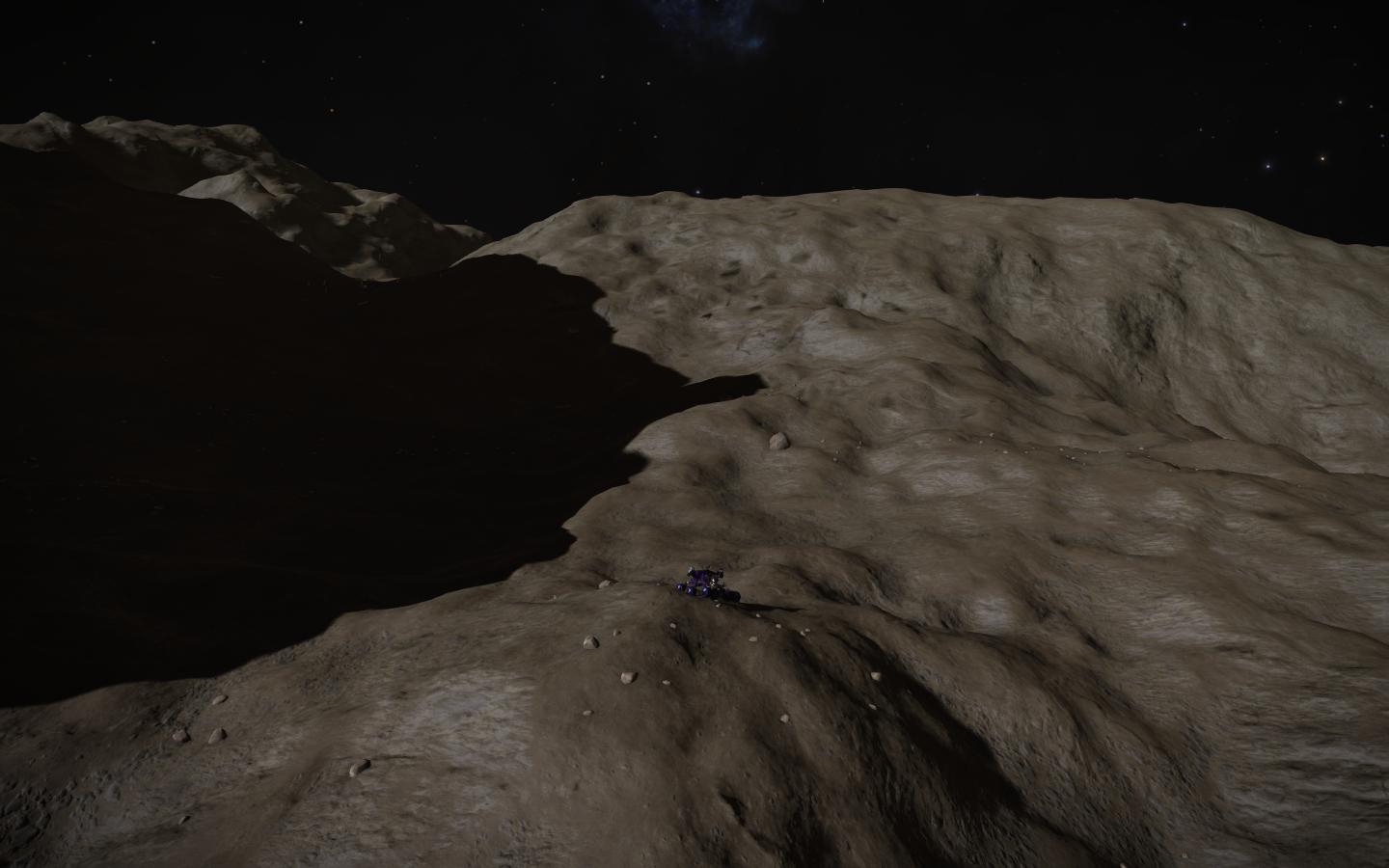 Fitzcarraldo was a welcome site as I brought the goods home. 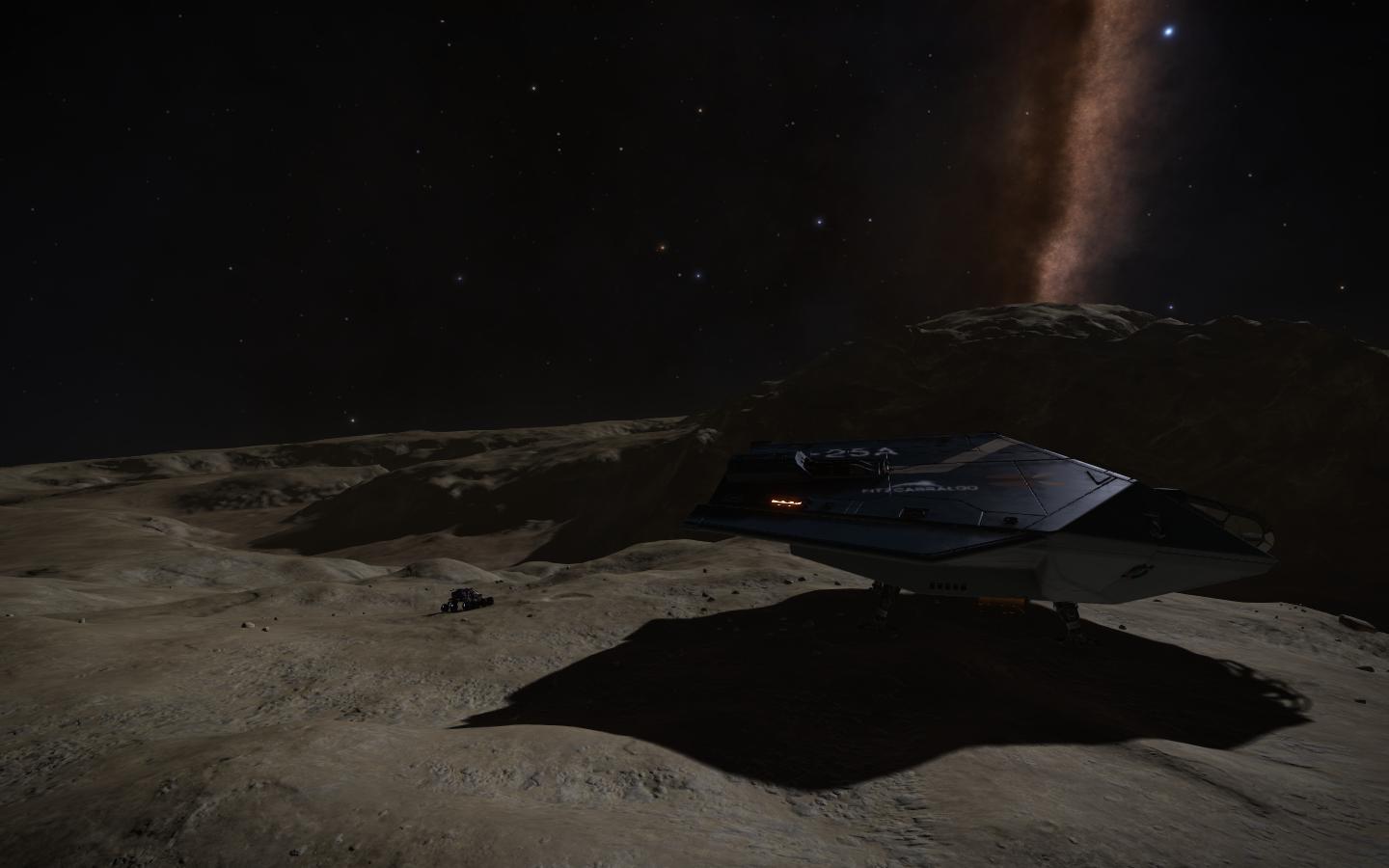 ​
As I left, I discovered that I wasn't alone. No, not aliens. But another Farragut-class battlecruiser keep an eye on things. 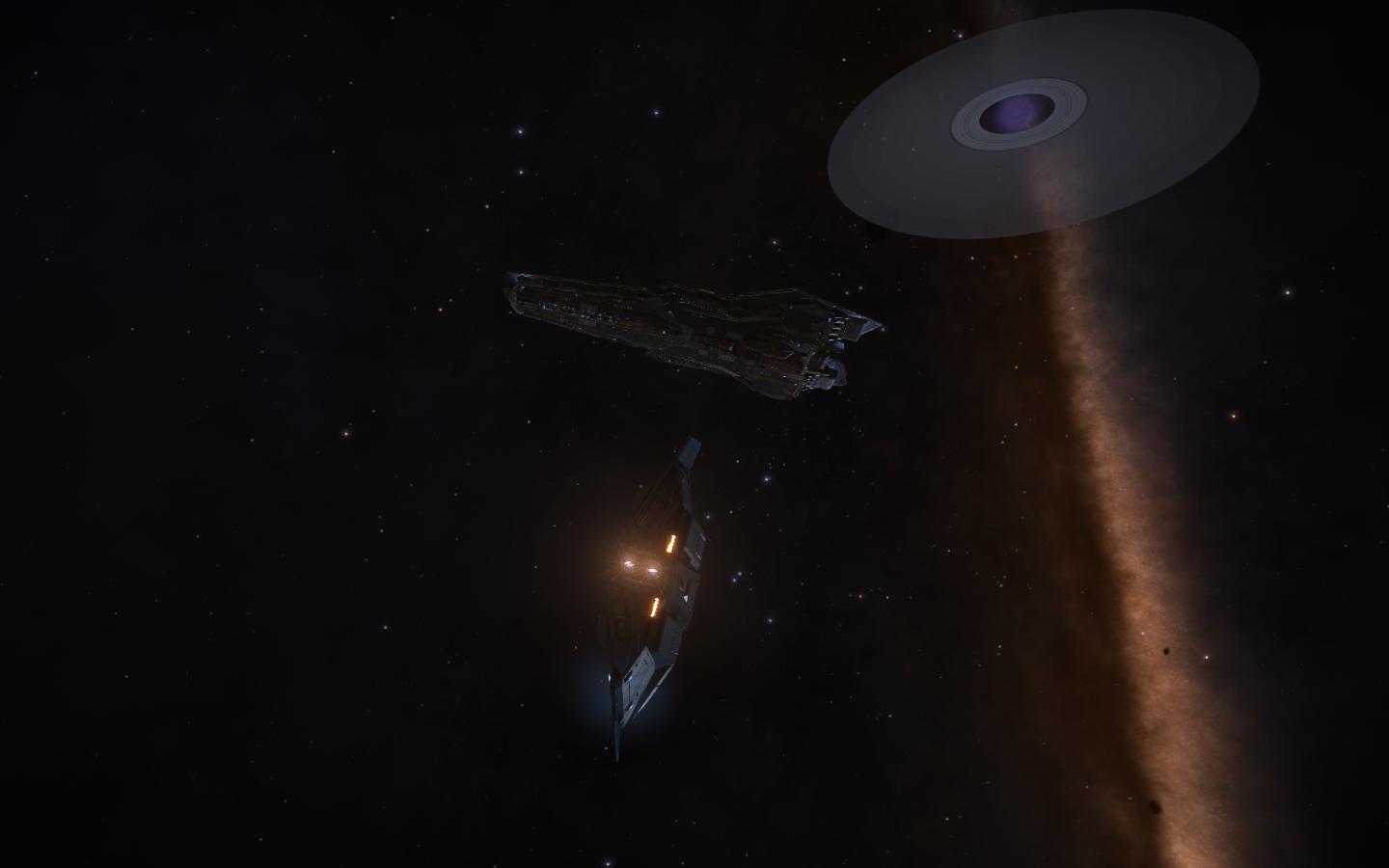 ​
As I made my way back to Reed's Rest, I realized that this had been quite the adventure. What started out as a routine news announcement had sent me over 300 LYs below the galactic plane, and put me in contact with some genuine alien structures. Pretty cool. I wonder what other adventures the galaxy holds for me?

All I knew for sure, is that now I needed to start heading all the way home. According to my calculations, that will involve almost 80 jumps!

Here I go again. Back to living on the Edge.

On the way off of Merope 5C, I discovered an "unknown probe" point of interest. The description makes for interesting reading: 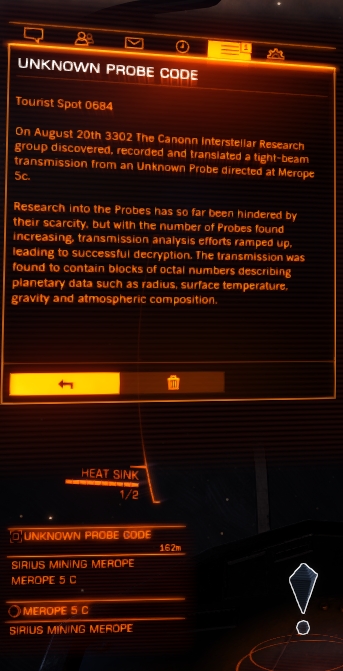