Cameronians Crossing from Critical Hits Orders for the Major

Fitting with my plans to continue playing from unplayed or seldom played packs and playing a wider selection of publishers though both MMP and BFP will still feature heavily as you would expect.

Cameronians Crossing is from Critical Hit's Orders for the Major reprint of Scotland The Brave back in 2012. I was given this module and Shout for Piats by Martin Baker some years ago and hoped to play some from these with him at a future Heroes but failed to show the same year as Martin. Something for the future then.

Typical of CH the pack includes a nice historical map, bunch of scenarios and campaign game. It also comes with some very nice counters though I have found with both packs you don't get all the vehicles you need for some of the scenarios. In this case I was short of some of the Churchill counters. Not a big issue given I have plenty in my counter mix. ROAR has this somewhat pro German with nine wins for the German and three for the British but not a massive base to work from.

As both sides come on from offboard we diced for side once James had arrived with me getting the British. I decided to rush the exit area with the carrier and double timed troops along the road whilst the troops with the 51mtr's followed on behind. I was then going to try and get the carrier off fairly quickly (I need to get 5 squad equivalents off hex F1) but would fire it if I got a good opportunity.

James brought his two halftracks into play and moved up the map as quickly as possible heading towards F1 but suffered immobilisation of one on a ESB attempt. This halftrack was then dispatched by a PIAT giving us our first burning wreck of the game.

James was to loose the second halftrack to the carrier as it's effect dice was snakes from a MG attack against the vehicle type, a second burning wreck. However the decision to stay and fight cost me the carrier the following German turn as a PF got him, yes a third burning wreck!

James still was able to get more infantry into the area of F1 blocking a charge off the map. I got a couple of squads over the bridge whilst most infiltrated through the gully and orchards. On turns three and four we both received armoured support, James two Panthers one per turn whilst I received six Churchill's three per turn. The Panthers got into battle first owing to a shorter route and the slow nature of a Churchill, though I did use the road and due to the German sniper being just a 2 CE almost the whole game.

I used the mortars to lay smoke on the Panthers and later drove Churchill's into the Panther hexes. I did not seem able to pass a morale test but fortunately James SS was almost as bad. My sniper woke up for one key break whilst James never activated despite a few attempts.

One PIAT team got to the rear of a smoked Panther but was broken from infantry fire from the Panthers hex whilst I tied everyone else up and made my dash for the board edge. James did not have much in the way of good order infantry and I was down to my last two tanks, it was going to be down to his Panthers. One was forced to fire so would not be moving whilst the second came out of his smoked position with me missing a side on shot from one Churchill (malfing the gun on an 11) James then went to overrun the stack awaiting the chance to move off the map but a side hit with the PIAT reduced the overrun to half effect and I was lucky enough to survive and off the map. 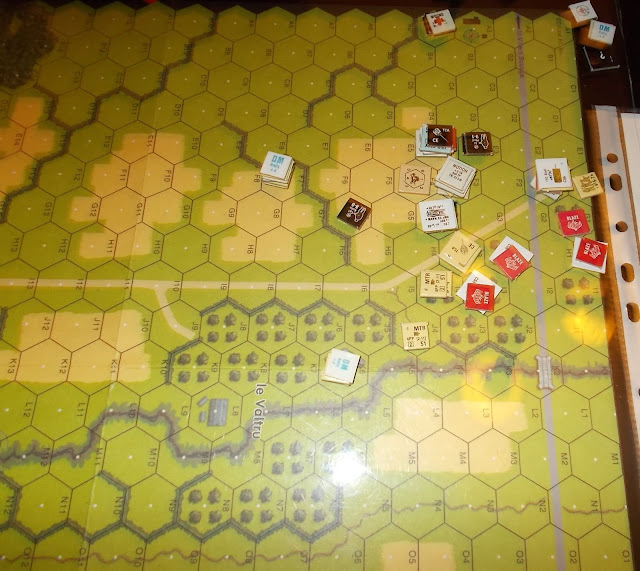 We ended up with six burning AFV's and two others wrecked. The scenario has six turns whilst ours finished my turn 6 and played fast. I think we played for about two maybe two and a half hours and typical of my experience with many CH products it was a lot of fun. I always like playing on historical maps especially if as yet unplayed. Of course this pack goes back to 1998 and as far as I know the scenarios have not been altered from the originals. I dislike the repackaging and renaming that CH do that can see you buy an old product again by accident, I would much prefer a more transparent re-release from CH.

If you don't already own the originals then the newer copies are well worth picking up. I have played a number of scenarios from Shout for the Piats and enjoyed those as well.
You must log in or register to reply here.
Share:
Facebook Twitter Reddit Pinterest Tumblr WhatsApp Email Link
Top